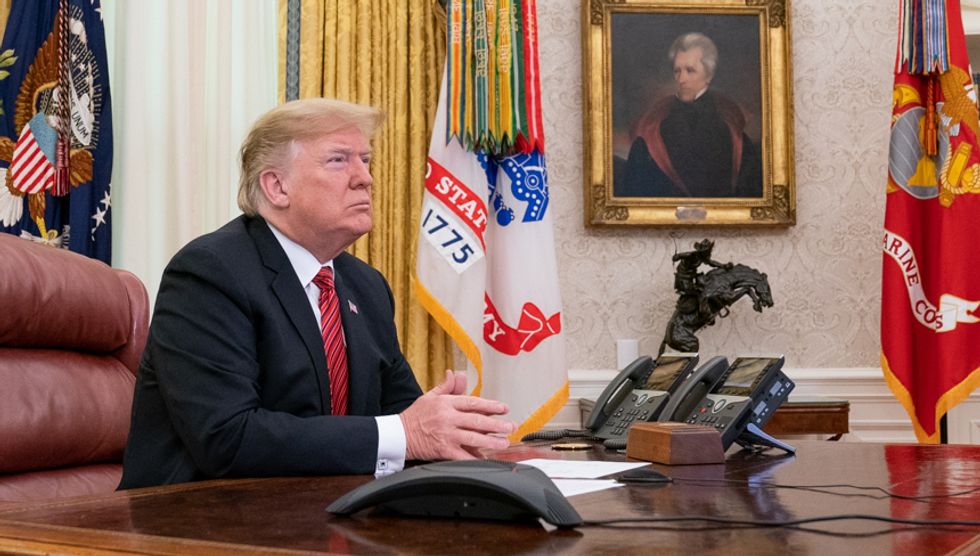 Two separate crises roiled President Donald Trump on the first day of the year of his re-election campaign.

The U.S embassy in Baghdad is recovering from an assault that grew out of a pro-Iran protest. Some protesters stormed the grounds and set fires. Hundreds came to the facility over two days to protest American airstrikes on the Iran-supported militia group, Kataeb Hezbollah, in Iraq and Syria that killed at least 25 people. That strike came in response to an attack on an Iraqi base that killed an American contractor, according to the U.S.

And now, the Pentagon has announced it is sending 750 troops to Iraq in response to the embassy assault, and thousands more a reportedly preparing to be deployed. It is, apparently, a classic case of escalating tension, and it's not clear where it will lead.

At the same time, North Korean leader Kim Jong-un has uncorked a new round of aggressive rhetoric of his own. Kim has said he is ready to take "shocking actual action." He has promised the release of a "new strategic weapon" in response to unproductive talks with the United States, undermining Trump's claims that the nuclear threat from North Korea has been eliminated.

"If the U.S. persists in its hostile policy toward the [Democratic People’s Republic of Korea], there will never be the denuclearization on the Korean Peninsula and the DPRK will steadily develop necessary and prerequisite strategic weapons for the security of the state until the U.S. rolls back its hostile policy," Kim said, USA Today reported.

It's never clear how seriously to take North Korea's rhetoric — it's often overblown and purposefully provocative. But it is a genuine signal that, as experts have argued since the beginning, Trump's attempts at diplomacy with the rogue nation have amounted to very little and have done nothing to alter Kim's strategic interests.

Likewise in Iran, Trump's failure is also on display. He tore up the Iran deal President Barack Obama had established with no good justification, insisting that being tough on the country could induce it to accept even more punishing terms. But the international community largely rejected Trump's abandonment of the deal, leaving the United States isolated on the issue. And Trump seems no closer to a new deal with the country than he ever was.

Now we find ourselves in yet another series of escalating punches and counter-punches with Iran, and the body count is rising. When tensions rose with Iran earlier in 2019 over attacks on an oil tanker and a U.S. drone, I feared that then-National Security Adviser could use the situation to engineer a full-scale conflict with Iran. That fate was avoided, and Bolton has since been ousted, but the ratcheting up of violence and provocation on both sides could lead Trump on the path to war even if he genuinely wants to avoid it.

Richard Haass, the president of the Council on Foreign Relations, observed:

So after 3 years of no international crises, @realDonaldTrump is facing one w Iran b/c he has rejected diplomacy &… https://t.co/XAmaibB2VW
— Richard N. Haass (@Richard N. Haass)1577834781.0

Some noted that "diplomacy" is too generous to describe Trump's treatment of North Korea. Laura Rosenberger, the director of Secure Democracy, said that the term "pageantry" is more apt.

But another point in Haass's tweet is worth paying attention to. He noted that, in Trump's North Korea and Iran foreign policy, he largely alienated American allies and the interagency staffers who typically shape U.S. diplomacy. As is readily apparent, going his own way hasn't proved to be a successful method. But it also means it will be much hard to turn to these partners and tested strategies for diplomatic help now because he cut them out at the beginning. Trump has also dramatically undercut his own credibility by prematurely declaring victory in both North Korea and Iran.

"A very predictable consequence of the lack of Trump’s showmanship in place of any policy or strategy on North Korea," noted Rosenberger of Kim's aggressive talk. "Buckle up."

The twin crises, of course, are arising when Trump is uniquely vulnerable.

"The timing of these new challenges is critical," wrote David Sanger in the New York Times. "Both the Iranians and the North Koreans seem to sense the vulnerability of a president under impeachment and facing re-election, even if they are often clumsy as they try to play those events to their advantage.: