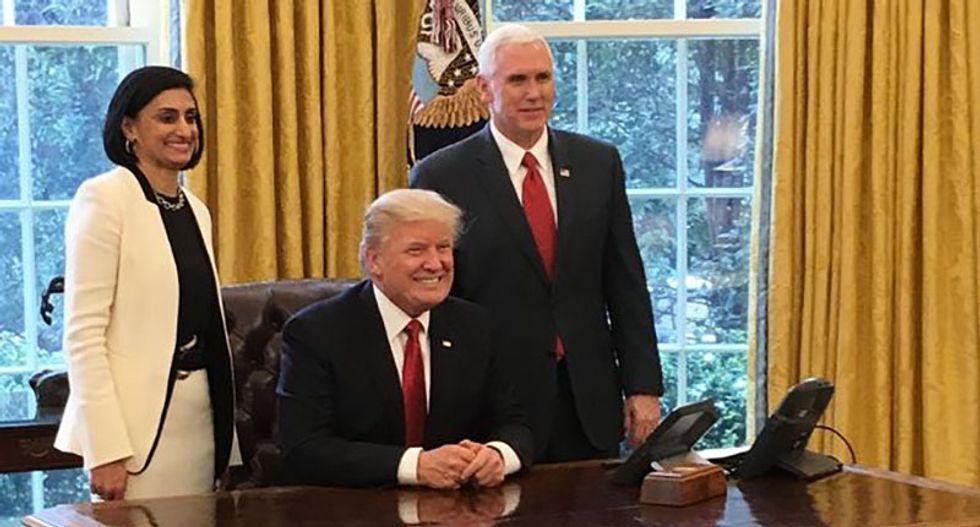 The Trump administration on Thursday unveiled a plan allowing states to convert federal Medicaid funding into block grants, a longstanding conservative goal that critics warn could have deadly consequences for millions of vulnerable people who rely on the healthcare program as a major source of income.

Seema Verma, head of the Centers for Medicare and Medicaid Services (CMS), announced the so-called "Healthy Adult Opportunity" initiative in a statement claiming the policy will "improve health outcomes and care" for low-income people.

Progressive advocacy groups warned the plan could do precisely the opposite by giving states a green light to cut Medicaid spending and divert federal funding to other state programs, potentially leaving millions without essential healthcare coverage.

"People, poor disabled people in particular, are going to die," tweeted Alice Wong, director of the Disability Visibility Project. "Not an exaggeration."

Urging the public to look beyond the plan's benign label, Public Citizen healthcare policy advocate Eagan Kemp said President Donald Trump's "nefarious program is just a Medicaid block grant by another name, and the only opportunity it will provide is to miss out on needed care or go broke trying to get it."

"Trump's plan will ensure that many working families who are currently covered by Medicaid will face cuts to their services, wait lists for needed care, and the risk of medical debt and bankruptcy from trying to pay for illness," Kemp said in a statement. "These further attempts to cut health care are just more evidence that Americans need Medicare for All now to protect their access to care once and for all."

The proposal, which is likely to face legal challenges, invites states to apply for a waiver to receive a lump-sum payment from the federal government for Medicaid instead of open-ended matching funds. Right-wing supporters of block-granting Medicaid claim it would give states more "flexibility," but critics warn the move could limit states' ability to increase healthcare spending in response to public need.

"Any state taking this offer is engaging in fiscal malpractice," Eliot Fishman, senior director of health policy with advocacy group Families USA, said in a statement. "Furthermore, the administration is acting lawlessly. None of the statute regarding Medicaid match rates can be waived administratively."

"We are better than this, and we—the American people—must hold the Trump administration and Republican members of Congress accountable," said Fishman.

"Trump wants to destroy Medicaid while claiming to save it," tweeted Rep. Bill Pascrell, Jr. (D-N.J.). "This fiendish scheme is an Orwellian fable conjured up by the most shameless pack of liars to ever occupy our government. Never forget Republicans' goal is to steal healthcare from as many Americans as they can."

Sen. Patty Murray (D-Wash.), the top Democrat on the Senate Health Committee, said in a statement that "even after people across the country spoke out and pressed Congress to reject President Trump’s plan to gut Medicaid with his Trumpcare bill, he's still charging forward with harmful policies that will hurt the many families who rely on Medicaid."