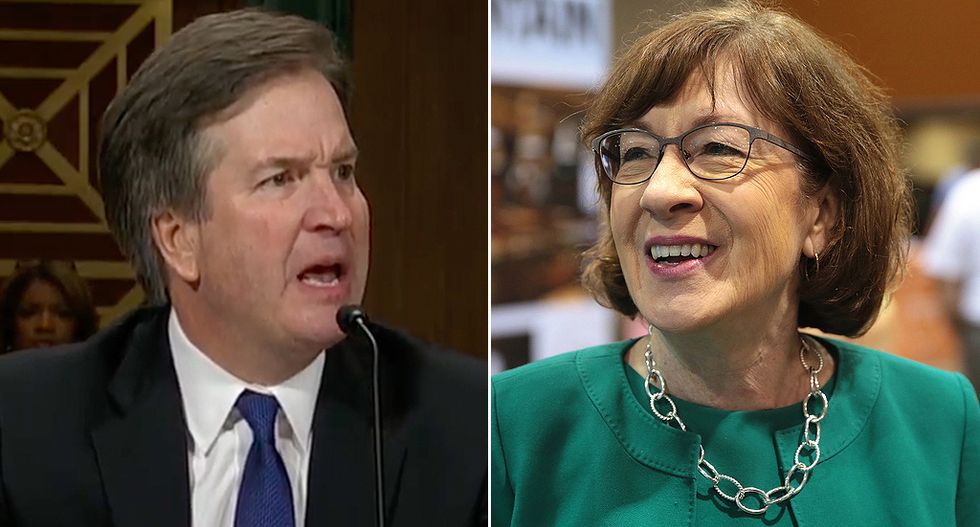 Politico reports that "occasional Trump critic" Mitt Romney is "mak[ing] his move" during "an increasingly bitter debate in his own party" over whether witnesses will be called and additional evidence heard in the impeachment trial of Donald Trump." The Utah senator and former GOP presidential nominee has been looking for a fourth Republican  colleague to join him and Sens. Susan Collins (R-ME) and Lisa Murkowski (R-AK) to reach the 51-vote threshold for hearing testimony from former national security adviser John Bolton and others who could corroborate testimony that Trump withheld security aid to Ukraine to coerce the country into launching a sham investigation into Joe Biden and his son Hunter with first-hand accounts.

It's basically a foregone conclusion that Trump will not be removed from office by the Republican-controlled senate regardless of how compelling the evidence is that he has violated his oath of office and obstructed justice. But they don't want that to be the focus of the debate. Republicans have literally run away from reporters to avoid answering the question of whether his actions are acceptable to them. Now, after months of wildly dishonest caterwauling about House Dems supposedly depriving Trump of a fair proceeding, Romney and other Republicans who want to project an image of independence are making the issue of whether to hear witnesses and see evidence in Trump's trial, rather than the substance of his abuses of power, into a major battle that they can "lose" before voting to acquit the president*.

It should go without saying that any legitimate judicial process requires evidence--it's like fighting over whether coffee beans should be part of the process of making a proper cup of joe.

This deflection from the central issue is reminiscent of Republicans' strategy to confirm Brett Kavanaugh. Kavanaugh wasn't on trial for alleged sexual assault--the real question was whether accusations made by multiple women, along with Kavanaugh's fierce partisanship and lack of judicial temperament, should be considered when reviewing his application for a lifetime job deciding the merits of democratically legislation. There is no due process afforded to people who want to become a shift-manager at Arby's, but Republicans made that a central point of contention and then held a similarly "bitter debate" about whether the FBI should at least look into the matter before voting on his confirmation.  After "reasonable" "moderates" like Collins and Murkowski prevailed, the Trump regime conducted an egregious sham of a probe, and that whitewash of Kavanaugh's background was good enough for them to elevate Kavanaugh to the nation's highest court.

This is all pretty obvious but, like the Potemkin debate over whether to allow the FBI to "investigate" Kavanaugh's past, the point is not to convince anyone. It's an exercise in muddying the waters, protecting vulnerable incumbents and affording cover to those "national security" Republicans whose hypocrisy will be most obvious when they vote to give Trump a pass for holding up military aide to an ally currently at war with an adversary to advance his own domestic political interests. According to the Politico piece, "Romney isn’t going full Trump resistance: He knows his group can’t bring in Bolton alone without enraging some of his colleagues. So any successful effort to hear new testimony would also likely have to include witnesses whom Trump wants to subpoena too." If he and his fellow "moderates" prevail in getting 51 of their colleagues to go along, expect a number of other Republican Senators to join them in voting to hear testimony from John Bolton and perhaps Joe or Hunter Biden, or some other Fox News bogeyman.

But Trump and Senate Republicans won't come out of that unscathed. The intra-party fight over witnesses is both real and significant in the sense that the White House is desperate for a quick acquittal, without any further embarrassment from the current and former White House officials who have already made a devastating case against him. Even if the fix is in, as it clearly is, hearing from Bolton and others will drag out the process and afford Democrats more opportunity to bring their case to the public.