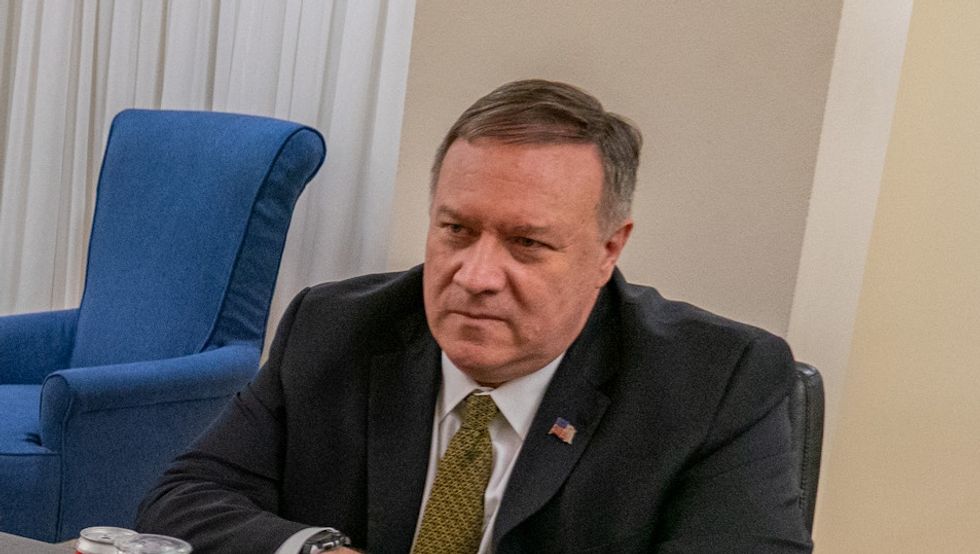 Secretary of State Mike Pompeo faced a brutal series of questions on Friday about his handling of the Ukraine scandal in an interview on NPR's "Morning Edition."

Host Mary Louise Kelly called out the fact that Pompeo hasn't supported members of his department who have been caught up in the scandal and the impeachment proceedings that resulted from it. Most notably, former U.S. Ambassador to Ukraine Marie Yovanovitch was smeared and ousted by President Donald Trump a group of cronies he worked with to solicit dirt from the country, and Pompeo never took a public stand in her defense.

"People who work for you in your department, people who have resigned from this department under your leadership, saying you should stand up for the diplomats who work here," said Kelly.

"I don't know who these unnamed sources are you're referring to," Pompeo said, stammering over the first few words. "I can't tell you this —"

"These are not unnamed sources," interjected Kelly. "This is your senior adviser Michael McKinley, a career foreign service officer with four decades of experience who testified under oath that he resigned in part due to the failure 'of the State Department to offer support to foreign service employees who got caught up in the impeachment inquiry on Ukraine.'"

The timing of my resignation was the result of two overriding concerns: the failure, in my view, of the State Department to offer support to Foreign Service employees caught up in the Impeachment Inquiry on Ukraine; and, second, by what appears to be the utilization of our ambassadors overseas to advance domestic political objectives.

Despite this well documented and publicized fact, Pompeo still tried to pretend as if the quote might fake. (When McKinley first resigned, Pompeo's remarks suggested it was a choice based on personal considerations, rather than principled objections, but the testimony later blew up these deceptions.)

"I'm not going to comment on things that Mr. McKinley may have said," Pompeo told Kelly. "I'll say only this: I have defended every State Department official. We've built a great team. The team that works here is doing amazing work around the world —"

"Sir, respectfully, where have you defended Marie Yovanovitch?" probed Kelly.

"Can you point me toward your remarks where you have defended Marie Yovanovitch?" Kelly pressed.

Listen to the exchange below:

Mike Pompeo — who refused a House subpoena — would be a top witness for Democrats in the impeachment trial. He is… https://t.co/GwPBJIA2rI
— Morning Edition (@Morning Edition)1579883537.0