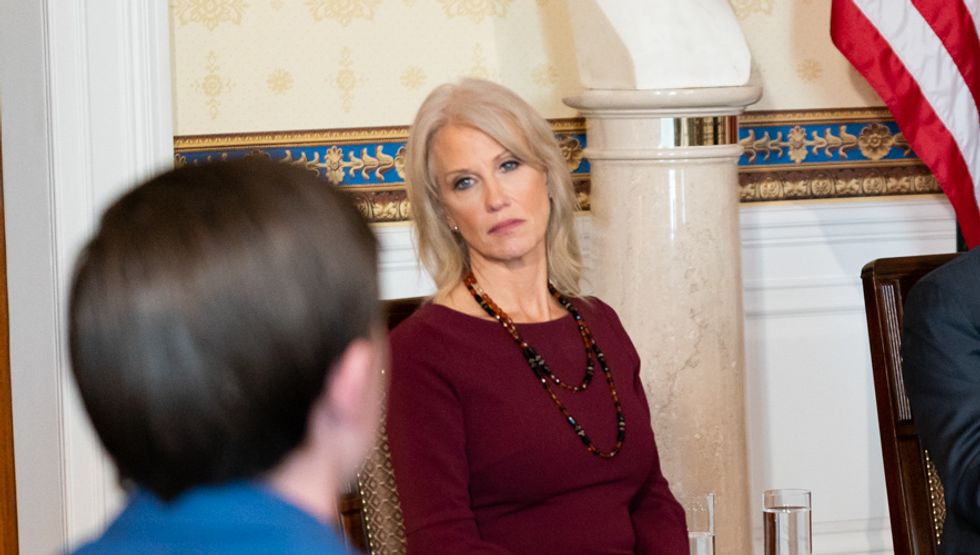 First Lady Melania Trump, joined by Senior Counselor to the President Kellyanne Conway and Secretary of Health and Human Services Alex Azar, listens to teens from the Truth Initiative during a listening session on the impact of youth vaping Wednesday, Oct. 9, 2019, in the Blue Room of the White House. (Official White House Photo by Andrea Hanks)
Cody Fenwick
January 20, 2020

It's Martin Luther King Jr. Day, so it was inevitable that at least one member of the Trump administration was bound to make some offensive or bizarre reference to the American civil rights leader.

Perhaps unsurprisingly, counselor to the president Kellyanne Conway was at least one of the officials on Monday to try to shoehorn a reference to King where it clearly didn't belong. In a comment to NBC News' Geoff Bennett, Conway tried to link King's struggle to President Donald Trump's struggle against impeachment.

Bennett asked Conway how Trump was observing the holiday.

"Well, I can tell you the president is preparing for Davos and agrees with many of the things that Dr. Martin Luther King stood for, and agreed with for many years — including unity and equality," she said, apparently revealing that Trump really didn't have any plans to observe the holiday. ("Preparing for Davos" doesn't count.)

But then she continued.

"And [Trump's] not the one trying to tear the country apart through an impeachment process and a lack of substance that really is very shameful at this point," she said. "I’ve held my opinion on it for a very long time, but when you see the articles of impeachment that came out, I don’t think it was Dr. King’s vision to have Americans dragged through a process where the president is not going to be removed from office, is not being charged with bribery, extortion, high crimes and misdemeanors."

Of course, Trump was plenty willing to drag the country through the ordeal of pressuring a foreign leader into investigating former Vice President Joe Biden on a flimsy basis during an election, which is what led to his impeachment after all.

Conway went on: "And I think that anybody who cares about 'and justice for all' on today or any day of the year will appreciate the fact that the president will have a full-throttle defense on the facts, and everybody should have that. I, this morning, was reading some of the lesser-known passages by Dr. King and I appreciate the fact that we as a nation respect him by giving him his own day, and I’m happy to share a birthday with this day."

It was a rambling and nonsensical answer, and it absurdly asserted that King would have for some reason defended Trump against impeachment charges. She offered no actual basis for this shameless assertion aside from the idea that King valued "unity." But of course, King, like any leader in a social movement, was entirely willing to be divisive and eschew unity if it meant making significant progress toward justice.

It's ludicrous and pointless for anyone to say what King would really have thought about Trump's impeachment, aside perhaps from those who actually knew him, and it's not clear what significance it would have even if we could know. But the fact that Conway is so willing to spout such inanities and to baselessly invoke the name of a civil rights hero in the president's defense tells us a lot about how seriously we should take her.