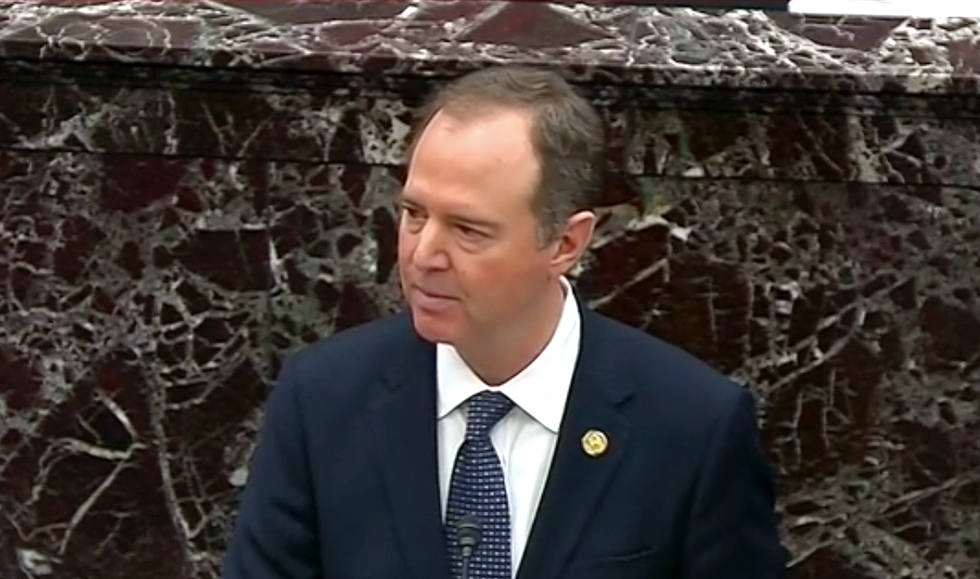 House Intelligence Committee Chair Adam Schiff, the leader of the impeachment managers, delivered a thorough and compelling opening statement on Wednesday to make the case in the Senate against President Donald Trump.

For more than two hours, Schiff recounted the facts that the inquiry in the House uncovered and argued that Trump abused his power in trying to pressure Ukraine to launch investigations of his domestic political enemies. He emphasized the significance of this effort and, in particular, the national security implications of Trump's effort to withhold congressionally approve military aid to Ukraine. And he linked the Trump's corrupt scheme with Ukraine to the president's broader effort to benefit from foreign election interference, including Russia's in 2016.

To bolster his case, Schiff made frequent and effective use of video clips from both the House hearings and of administration officials themselves, such as Trump and White House Chief of Staff Mick Mulvaney, speaking in other contexts.

Here are five of the most compelling moments from Schiff's statement:

1. Schiff explained why Trump's defense of asking for an investigation of former Vice President Joe Biden is unbelievable.

2. Schiff threw Mulvaney's own words at a press briefing — admitting that there was a quid pro quo for an investigation with Ukraine — back at the administration.

3. He highlighted a section of the Trump's July 25 call with Ukrainian President Volodymyr Zelensky that is often forgotten but shows that the foreign leader understood the White House's ask was a part of a quid pro quo.

4. He appealed to Republicans about broader principles about presidential conduct, rather than just focusing on what Trump has done. And he argued that the White House's position puts the president above the law.

Schiff says Congress must consider if another president does the same things Trump did and the administration argue… https://t.co/tTnbb7kGY7
— CBS News (@CBS News) 1579723464.0

5. Schiff tied Trump's effort to get Ukraine's election help to the moment suspicions about the president's foreign ties first began: his solicitation of Russia's help in 2016.