‘Damning’ Parnas docs are ‘what Trump has been afraid of’ — and demolish his 3 key impeachment defenses: former acting solicitor general 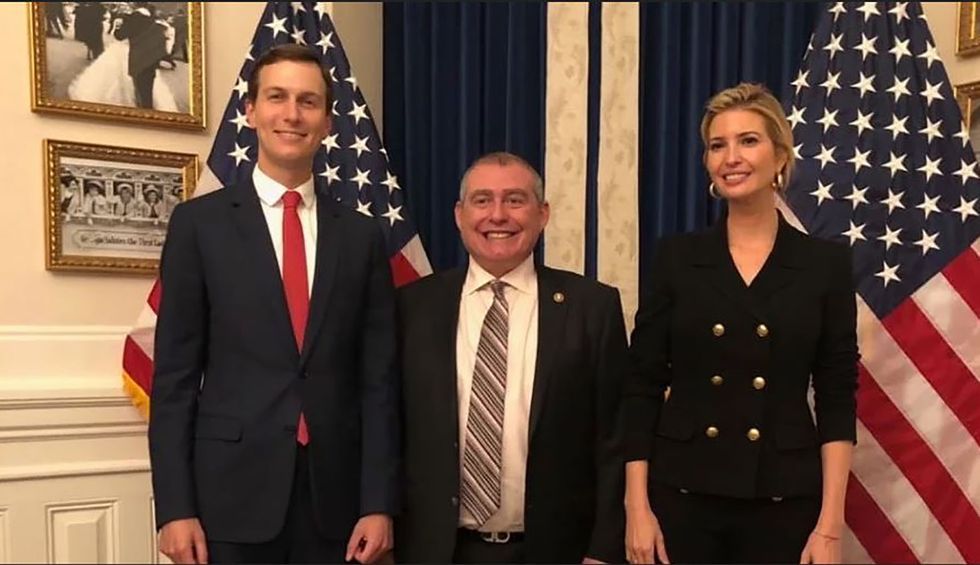 In a column for the Washington Post, ex-acting solicitor general Neil Katyal and former Justice Department official Joshua A. Geltzer, stated that the Tuesday afternoon document dump of notes and texts by Rudy Giuliani associate Lev Parnas is exactly what President Donald Trump worried might happen if he didn’t get his Senate impeachment trial wrapped up as soon as possible.

“Americans who have been wondering why President Trump has taken the extraordinary step of trying to block every document from being released to Congress in his impeachment need wonder no longer. The new documents released Tuesday evening by the House Intelligence Committee were devastating to Trump’s continuing — if shifting — defense of his Ukraine extortion scandal, just days before his impeachment trial is likely to begin in the Senate,” the two lawyers wrote. “These new documents demolish at least three key defenses to which Trump and his allies have been clinging.”

As the New York Times reported, “One of the new documents shows Mr. Giuliani saying that he had Mr. Trump’s blessing to seek a meeting with Volodymyr Zelensky, Ukraine’s president-elect, last spring, potential new evidence on the eve of the president’s impeachment trial,” adding that “In a separate series of cryptic text messages, Mr. Parnas communicated with another man who appeared to be monitoring the movements of [Ukraine ambassador] Ms. Yovanovitch. The texts, exchanged in March on WhatsApp, indicated that the second man, Robert F. Hyde, was in touch with people in Ukraine who were watching Ms. Yovanovitch.”

According to Katyal and Geltzer, “The documents released Tuesday now show what Trump has been so afraid of. For starters, they prove that Trump’s already-eyebrow-raising claim to have been fighting corruption in Ukraine was bogus. Notes taken by Rudy Giuliani associate Lev Parnas — now facing federal criminal charges — show what his and Giuliani’s mission was when they got in touch with Ukrainian President Volodymyr Zelensky: ‘get Zalensky [sic] to Announce that the Biden case will Be Investigated.'”

“One of those documents shows just how important it might be to have such witnesses testify before the Senate. The document is a letter from Giuliani to Zelensky when he was Ukraine’s president-elect. It begins: ‘I am private counsel to President Donald J. Trump. Just to be precise, I represent him as a private citizen, not as President of the United States.’ The letter then requested a meeting with Zelensky.” they wrote. “This letter is a devastating indication of what’s been clear to many all along: that Trump’s pursuit of an announcement that Ukraine was looking into Biden was an abuse of his public office for personal gain. That’s what this letter sure seems to be saying. And it makes clear that what was afoot had nothing to do with law enforcement or Biden’s corruption — it wasn’t a request from the official ‘President of the United States’ but rather one from a ‘private citizen.'”

“It’s so damning to Trump that we can foresee the president claiming during impeachment that Giuliani was lying — back then, and even still today. That’s where Senate testimony can prove crucial,” they continued. “All told, the documents help to explain Trump’s consistent push to bury the evidence against himself. Every week, it becomes clearer why Trump has withheld documents from Congress, blocked executive branch officials and even private citizens from testifying before Congress, and overall, well, obstructed Congress, as the second article of impeachment rightly describes it. It’s because Trump is a man with something to hide. Let’s see what else he’s hiding — in front of the Senate next week, in a good, old-fashioned American trial for all to see.”