Trump's Ukraine scheme spread chaos through the administration as attorneys sought to put him above the law: report 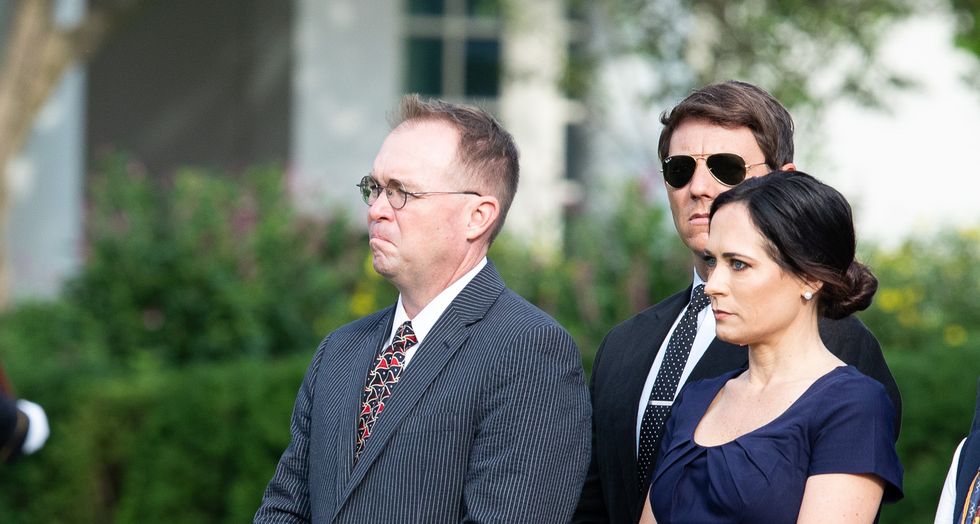 White House Chief of Staff Mick Mulvaney and White House Press Secretary Stephanie Grisham look on as the Color Guard prepares to post the colors for a moment of silence on the South Lawn of the White House Wednesday, Sept. 11, 2019, in remembrance of those lost on September 11, 2001. (Official White House Photo by Keegan Barber)
Mark Sumner
and
Daily Kos
December 31, 2019 Trump

At first glance, the information included in the whistleblower complaint triggered by Donald Trump’s July 25 phone call to the president of Ukraine was extremely concerning—easily enough to justify the resulting investigations launched by Congress. By the time the House of Representatives held its first round of hearings on the matter, it was clear that the situation was even worse than the complaint had indicated. That it stretched by months to include the deliberate smear and removal of a highly respected U.S. ambassador. And that, in addition to pressuring Ukraine into announcing investigations into both his past opponent and his expected future opponent, Trump not only withheld aid from an ally, but did so to the benefit of Russia.

Weeks later, as the pieces continue to slot into place, everything that’s been found shows that Trump’s actions were even worse than expected. Far from being a lone voice crying in the wilderness, the whistleblower was one of a whole chorus of people inside the White House who realized that Trump’s actions were politically motivated and would have consequences both in Ukraine and in Washington. It’s just that most of those voices were engaged in a slapdash effort to cover up an action they knew was wrong. In fact, every piece of new information released has only made Trump’s impeachment seem to have been more certain, and more richly deserved.

The latest timeline of events assembled by The New York Times shows how what began as a separate effort by Trump’s personal attorney to generate dirt for the upcoming election was rolled into and eventually became the dominant theme of official U.S. policy in Ukraine. It also shows that officials up and down the line knew that Trump’s order to place a hold on military assistance was a violation of U.S. law, as well as an open invitation for aggressive action from Russia.

Though the Congress was unsuccessful in getting Trump to release a single document by sending subpoenas, Freedom of Information Act requests have freed up some emails exchanged among the officials involved, and both the House Intelligence Committee and reporters have lined up interviews with witnesses and participants. The resulting narrative shows that Trump’s efforts to game the system for his benefit didn’t just upset the incoming government in Ukraine; it sent spasms through the government in Washington.

Trump’s order to delay the military assistance and his efforts to extract statements from the Ukrainian leadership didn’t just cause concern inside the Office of Management and Budget and at the top levels of the State Department—they caused chaos. White House officials found themselves facing an illegal order, and they clearly knew it was an illegal order. It’s just that most of those who faced it didn’t come forward to Congress or the public. Instead, they joined in the efforts to hide what Trump had done.

Then they went further. Faced with the knowledge that the law did not allow Trump to delay the assistance once the Department of Defense had completed its review of it—which had happened months before Trump ordered the halt—White House lawyers did something genuinely extraordinary. And genuinely frightening.

Lawyers at the OMB, the Department of Justice, and the White House communicated and coordinated around a new theory, one that said Trump was right when he claimed, “I have an Article 2 where I have the right to do whatever I want as president.” The coordinated legal staffs genuinely developed an argument that, even though there was clear law on the matter, Trump’s “role as commander in chief would simply allow him to override Congress on the issue.”

The audacity and disruption encapsulated here are hard to overstate. The only way that the legal staff at the White House could find to defend Trump’s actions was to generate an argument that he was genuinely above the law.

Laying all the documents end to end doesn’t just generate this “legal” defense of Dictator Donald; It also shows the mad scramble that was underway by White House officials to create excuses and defenses for their own personal actions—even when multiple people around them knew they were lying. For example, acting chief of staff Mick Mulvaney claimed to have stepped from the room every time Rudy Giuliani spoke with Trump, and declared that he hadn’t known the contents of Trump’s July 25 call. Not only was this not true, but others knew it wasn’t true. Mulvaney is just one example of a White House where staffers were engaged in crafting a narrative to excuse Trump’s actions as they also worked to protect themselves from what many saw as inevitable fallout.

In his attempt to turn foreign policy into an arm of his campaign, Donald Trump disrupted the situation in Ukraine; he also threw the White House into an all-for-Trump and every-man-for-himself anarchy. What’s amazing is that it took a whistleblower to sound the alarm, when dozens if not hundreds were aware that the White House was engaged in deliberately illegal activity and a widespread cover-up.