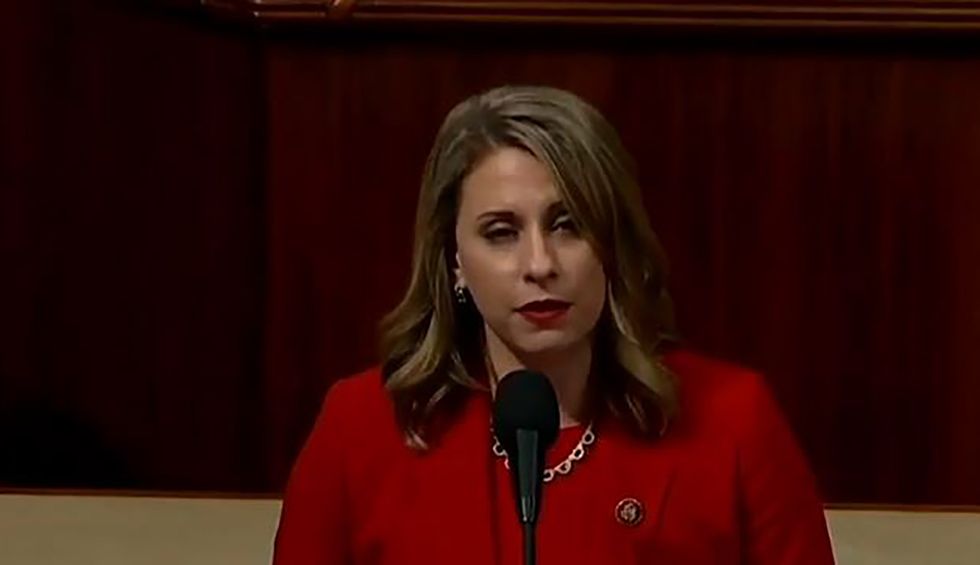 Former California Congressperson Katie Hill wrote a brave, moving essay for The New York Times which detailed her narrative as a survivor of a “toxic” marriage, leaving Congress, and contemplating suicide while in one of the “darkest places” she’s ever experienced. The Op-Ed quickly went viral and online support has been incredible.

After a political hack published nude photographs of Hill without her consent, criticism (and outright shaming) of the young, openly bisexual Congressperson was swift and fierce. Hill says that beyond even just criticism online, she and her staff faced actual threats. Between all of it, as she writes in her piece, she contemplated suicide.

"The fear that my husband would ruin me hung over me every day. I knew the risk when I left, but I thought I didn't have a choice, and despite the threat, I felt better than I had in years," Hill wrote. "The day that my communications director ran into my office and showed me the nudes and private text messages that had been published on a right-wing website called Red State, everything came crashing down. I believe my husband is the source of the images." (As noted in the Op-Ed, her estranged husband did not reply to the Times for comments.)

In addition to sharing her own emotional journey, Hill dispelled a rumor that Democrats in office, specifically Speaker Nancy Pelosi, urged her to resign.

"In fact, one of the most difficult moments during my resignation process was my phone call to the Speaker, a woman I admire more than anyone and whom I had come to love," Hill wrote, diffusing that speculation. "She told me I didn't have to do this, that the country needed me and that she wished I hadn't made this decision, but she respected me and what I felt I needed to do. I told her what I told everyone else when I announced my resignation: that it was the right thing to do."

Hill tweeted a link to the piece on Saturday, Dec. 7, the day the essay went live.

Sharing personal stories often helps shatter stigma, and Hill’s words are no exception. While abuse continues to be hurtled at her online, Hill also got a ton of support—especially from people who identify themselves as survivors. Since the images were first leaked, people have stressed that the criticism against Hill is a double standard, rooted in sexism, and fundamentally unfair.

Relatedly, people have pointed out that in a changing world of technology, images and videos that could later become ‘cyber exploitation’ may unfairly keep women and non-binary people in fear; if it’s the people in these images being shamed, punished, or shunned, the opportunity for blackmail and abuse runs high. The big picture hope? Better protection for victims, as well as stricter laws, including on the federal level. And while we usually talk about cyber exploitation being used against women, it could also be used to abuse or target men—protections would help every single person, regardless of sex or gender identity.

In this Times essay, Hill also shatters stigma by talking about mental health and suicide. And people are deeply moved.

I didn’t know much about Katie Hill. Now I know she is heroic. Please read this. But warning: it contains a viscera… https://t.co/p5BSLUiJeQ
— Scott Hechinger (@Scott Hechinger) 1575777296.0

Crying after reading this. Bi+ women face higher rates of domestic violence & suicidality than many others in our… https://t.co/O407hZtoYm
— Helen Parshall (@Helen Parshall) 1575755950.0

A heart wrenching oped from ⁦@KatieHill4CA⁩. it’s clear being trapped in a abusive marriage was the backdrop to eve… https://t.co/RA6lOspqZr
— Kirsten Powers (@Kirsten Powers) 1575816156.0

@KatieHill4CA I am experiencing a range of emotions reading this... enormous gratitude most of all. I am grateful y… https://t.co/8t9XLbiiTE
— Ayanna Pressley (@Ayanna Pressley) 1575762101.0

"I don't know exactly what's ahead for me," Hill wrote, "and I know there's a lot more pain ahead. But I'm in the fight, and I'm glad it's not all over after all."

If you or a loved one are in need of support, check out these free mental health resources. The 24-7 National Suicide Prevention Lifeline is 1-800-273-8255.