'It's a Wonderful Life'... for bankers 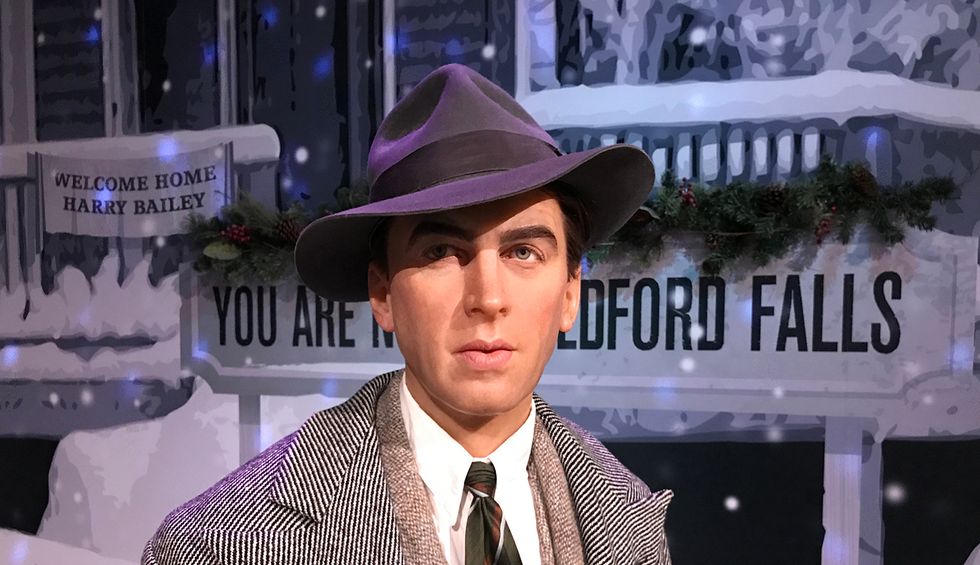 Christmas movies provide a yearly opportunity to imagine a more caring society.  Among the favorites that are watched year after year, It's a Wonderful Life stands out for stressing the importance of banking to such a society.  The film's hero George Bailey is an honest and generous Main Street banker who has helped struggling working people achieve their dreams of homeownership.  Yet Bailey is on the brink of committing suicide before discovering just how much his life has meant to the local community. On this fateful night, an alternative future is revealed in which Bailey never existed, and his beloved hometown of Bedford Falls has fallen into the clutches of the greedy Henry Potter, owner of the town's largest bank and a man who cares nothing for the public welfare.  Without Bailey to finance the hopes and aspirations of his neighbors, Potter has created an unrecognizable town that is defined by corruption, slum housing, pawn shops, and seedy bars.

While we often consign the subject of finance to bankers, the annual tradition of watching It's a Wonderful Life serves as an unexpected reminder of just how much power finance exerts over all of our lives.  The figures of Bailey and Potter represent contrasting models for how banking can be conducted.  Bailey's bank is an asset to Bedford Falls, while Potter's bank exploits the community. Bailey's bank provides depositors with safety and makes affordable loans available to working people, while Potter's bank focuses solely on benefiting its owner.  Potter will fund only those projects that produce the most profit for himself, and he has no regard for the impact his decisions have on others.

It's a Wonderful Life may be fiction, yet its release in 1946 registered a half-century long struggle to make banking democratic.  During the Gilded Age, when working people thought of bankers they envisioned Henry Potter. Americans were more likely to see J. P. Morgan as a personification of greed than to honor his business achievements.  Such economic disasters as the Panic of 1907 and the Great Depression exposed the banking system's flaws, inspiring everyday Americans to engage in regular discussions of financial policy and proposed banking reforms.  All too frequently, small depositors lost their life's savings in bank failures that resulted from mismanagement and even fraud. And banks typically declined to extend the affordable small loans necessary for homeownership and operating farms.

For decades, working people sought to have the national government make banks safer and loans more accessible.  Labor union and farm organization meetings routinely backed these reforms. The residents of one Nebraska town declared their support for federal farm loans “at a low rate of interest.”  Among the voices that promoted the idea that government should guarantee bank deposits was the Chicago Federation of Labor, which insisted such a program would be “comprehensive and effective.”  Meanwhile, bankers vehemently opposed these policy proposals as government overreach.

Amid the severe economic crisis and banking meltdown of the early 1930s—when thousands of banks failed—grassroots agitation for financial reform produced mailbags filled with letters and telegrams demanding government action.  In response to the constituent mail piling up on Capitol Hill and at the White House, President Franklin D. Roosevelt's New Deal reformed the banking system so that it better served ordinary citizens. Roosevelt signed a law creating the Federal Deposit Insurance Corporation (FDIC) to protect bank depositors.  The New Deal also introduced important measures that provided farmers and homeowners with reliable supplies of low-cost credit.

Thanks to New Deal financial reform, by the 1940s bankers started looking less like Henry Potter and more like George Bailey.  Grassroots engagement with financial issues had made banking more humane. For the first time in American history, bank failures became rare events.  Farmers benefited from easier access to credit and homeownership would rise significantly. Once achieved, however, ordinary citizens started to take this reformed financial order for granted.  Working people began to neglect financial issues following World War II, leaving an opening for industry lobbyists to direct banking policy. By the close of the twentieth century, deregulation had allowed the Potters of the banking world to resume their former practices. The economic crisis of 2008 led many Americans to consider the degree that their nation has come to look less like Bedford Falls and more like Pottersville. When voters cheer on Bernie Sanders and Elizabeth Warren for criticizing Wall Street, it's a call to bring back George Bailey.

Christopher W. Shaw is the author of Money, Power, and the People: The American Struggle to Make Banking Democratic (University of Chicago Press, 2019). Follow him on Twitter: @chris_w_shaw.