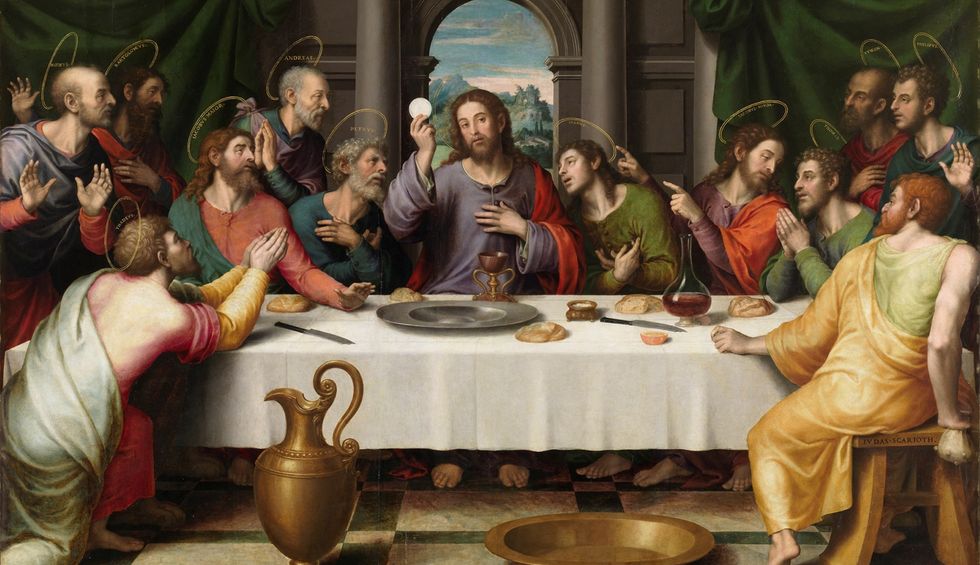 Most antiquities scholars think that the New Testament gospels are “mythologized history.”  In other words, based on the evidence available they think that around the start of the first century a controversial Jewish rabbi named Yeshua ben Yosef gathered a following and his life and teachings provided the seed that grew into Christianity. At the same time, these scholars acknowledge that many Bible stories like the virgin birth, miracles, resurrection, and women at the tomb borrow and rework mythic themes that were common in the Ancient Near East, much the way that screenwriters base new movies on old familiar tropes or plot elements. In this view, a “historical Jesus” became mythologized.

For over 200 years, a wide ranging array of theologians and historians grounded in this perspective have analyzed ancient texts, both those that made it into the Bible and those that didn’t, in attempts to excavate the man behind the myth.  Several current or recent bestsellers take this approach, distilling the scholarship for a popular audience. Familiar titles include Zealot by Reza Aslan and How Jesus Became God by Bart Ehrman.

By contrast, other scholars believe that the gospel stories are actually “historicized mythology.”  In this view, those ancient mythic templates are themselves the kernel. They got filled in with names, places and other real world details as early sects of Jesus worship attempted to understand and defend the devotional traditions they had received.

The notion that Jesus never existed is a minority position.  Of course it is! says David Fitzgerald, the author of Nailed: Ten Christian Myths That Show Jesus Never Existed at All.  Fitzgerald points out that for centuries all serious scholars of Christianity were Christians themselves, and modern secular scholars lean heavily on the groundwork that they laid in collecting, preserving, and analyzing ancient texts.  Even today most secular scholars come out of a religious background, and many operate by default under historical presumptions of their former faith.

Fitzgerald–who, as his book title indicates, takes the “mythical Jesus” position–is an atheist speaker and writer, popular with secular students and community groups. The internet phenom, Zeitgeist the Movie introduced millions to some of the mythic roots of Christianity. But Zeitgeist and similar works contain known errors and oversimplifications that undermine their credibility. Fitzgerald seeks to correct that by giving young people accessible information that is grounded in accountable scholarship.

More academic arguments in support of the Jesus Myth theory can be found in the writings of Richard Carrier and Robert Price. Carrier, who has a Ph.D. in ancient history uses the tools of his trade to show, among other things, how Christianity might have gotten off the ground without a miracle. Price, by contrast, writes from the perspective of a theologian whose biblical scholarship ultimately formed the basis for his skepticism. It is interesting to note that some of the harshest critics of popular Jesus myth theories like those from Zeitgeist or Joseph Atwill (who argued that the Romans invented Jesus) are academic Mythicists like these.

The arguments on both sides of this question—mythologized history or historicized mythology—fill volumes, and if anything the debate seems to be heating up rather than resolving. Since many people, both Christian and not, find it surprising that this debate even exists—that serious scholars might think Jesus never existed—here are some of the key points that keep the doubts alive:

In the words of Bart Ehrman (who himself believes the stories were built on a historical kernel):

“What sorts of things do pagan authors from the time of Jesus have to say about him? Nothing. As odd as it may seem, there is no mention of Jesus at all by any of his pagan contemporaries. There are no birth records, no trial transcripts, no death certificates; there are no expressions of interest, no heated slanders, no passing references – nothing. In fact, if we broaden our field of concern to the years after his death – even if we include the entire first century of the Common Era – there is not so much as a solitary reference to Jesus in any non-Christian, non-Jewish source of any kind. I should stress that we do have a large number of documents from the time – the writings of poets, philosophers, historians, scientists, and government officials, for example, not to mention the large collection of surviving inscriptions on stone and private letters and legal documents on papyrus. In none of this vast array of surviving writings is Jesus’ name ever so much as mentioned.” (pp. 56-57)

2. The earliest New Testament writers seem ignorant of the details of Jesus’ life, which become more crystalized in later texts.

Paul seems unaware of any virgin birth, for example. No wise men, no star in the east, no miracles. Historians have long puzzled over the “Silence of Paul” on the most basic biographical facts and teachings of Jesus. Paul fails to cite Jesus’ authority precisely when it would make his case. What’s more, he never calls the twelve apostles Jesus’ disciples; in fact, he never says Jesus HAD disciples –or a ministry, or did miracles, or gave teachings. He virtually refuses to disclose any other biographical detail, and the few cryptic hints he offers aren’t just vague, but contradict the gospels. The leaders of the early Christian movement in Jerusalem like Peter and James are supposedly Jesus’ own followers and family; but Paul dismisses them as nobodies and repeatedly opposes them for not being true Christians!

Liberal theologian Marcus Borg suggests that people read the books of the New Testament in chronological order to see how early Christianity unfolded.

Placing the Gospels after Paul makes it clear that as written documents they are not the source of early Christianity but its product. The Gospel — the good news — of and about Jesus existed before the Gospels. They are the products of early Christian communities several decades after Jesus’ historical life and tell us how those communities saw his significance in their historical context.

3. Even the New Testament stories don’t claim to be first-hand accounts.

We now know that the four gospels were assigned the names of the apostles Matthew, Mark, Luke, and John, not written by them. To make matter sketchier, the name designations happened sometime in second century, around 100 years or more after Christianity supposedly began.

For a variety of reasons, the practice of pseudonymous writing was common at the time and many contemporary documents are “signed” by famous figures.  The same is true of the New Testament epistles except for a handful of letters from Paul (6 out of 13) which are broadly thought to be genuine.  But even the gospel stories don’t actually say, “I was there.” Rather, they claim the existence of other witnesses, a phenomenon familiar to anyone who has heard the phrase, my aunt knew someone who . . . .

4. The gospels, our only accounts of a historical Jesus, contradict each other.

If you think you know the Jesus story pretty well, I suggest that you pause at this point to test yourself with the 20 question quiz at ExChristian.net.

The gospel of Mark is thought to be the earliest existing “life of Jesus,” and linguistic analysis suggests that Luke and Matthew both simply reworked Mark and added their own corrections and new material. But they contradict each other and, to an even greater degree contradict the much later gospel of John, because they were written with different objectives for different audiences. The incompatible Easter stories offer one example of how much the stories disagree.

They include a cynic philosopher, charismatic Hasid, liberal Pharisee, conservative rabbi, Zealot revolutionary, and nonviolent pacifist to borrow from a much longer list assembled by Price. In his words (pp. 15-16), “The historical Jesus (if there was one) might well have been a messianic king, or a progressive Pharisee, or a Galilean shaman, or a magus, or a Hellenistic sage.  But he cannot very well have been all of them at the same time.”  John Dominic Crossan of the Jesus Seminar grumbles that “the stunning diversity is an academic embarrassment.”

For David Fitzgerald, these issues and more lead to a conclusion that he finds inescapable:

Jesus appears to be an effect, not a cause, of Christianity. Paul and the rest of the first generation of Christians searched the Septuagint translation of Hebrew scriptures to create a Mystery Faith for the Jews, complete with pagan rituals like a Lord’s Supper, Gnostic terms in his letters, and a personal savior god to rival those in their neighbors’ longstanding Egyptian, Persian, Hellenistic and Roman traditions.

In a soon-to-be-released follow up to Nailed, entitled Jesus: Mything in Action, Fitzgerald argues that the many competing versions proposed by secular scholars are just as problematic as any “Jesus of Faith:”

Even if one accepts that there was a real Jesus of Nazareth, the question has little practical meaning: Regardless of whether or not a first century rabbi called Yeshua ben Yosef lived, the “historical Jesus” figures so patiently excavated and re-assembled by secular scholars are themselves fictions.

We may never know for certain what put Christian history in motion. Only time (or perhaps time travel) will tell.

Author’s note:  Not being an insider to this debate, my own inclination is to defer to the preponderance of relevant experts while keeping in mind that paradigm shifts do occur.  This means that until either the paradigm shift happens or I become a relevant expert myself, I shall assume that the Jesus stories probably had some historical kernel. That said, I find the debate fascinating for several reasons: For one, it offers a glimpse of the methods scholars use to analyze ancient texts.  Also, despite the heated back and forth between mythicists and historicists, their points of agreement may be more significant than the difference between historicized mythology and mythologized history. The presence of mythic tropes or legendary elements in the gospel stories has been broadly accepted and documented, while the imprint of any actual man who may have provided a historical kernel–how he may have lived, what he may have said, and how he died–is more hazy than most people dream.

Valerie Tarico is a psychologist and writer in Seattle, Washington. She is the author of Trusting Doubt: A Former Evangelical Looks at Old Beliefs in a New Light and Deas and Other Imaginings, and the founder of www.WisdomCommons.org. Subscribe to her articles at Awaypoint.Wordpress.com.