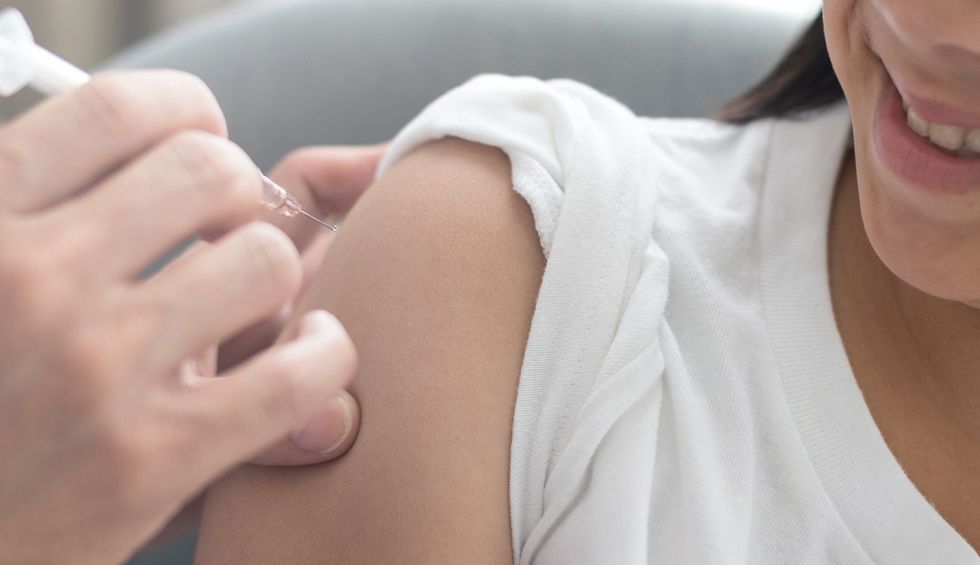 A humanitarian medical group that last month unsuccessfully offered to give flu shots to detained children and families gathered outside a Customs and Border Protection facility in southern California to protest federal immigration officials’ ongoing refusal to protect families—and they aren’t leaving until steps are taken to do so, The San Diego Union-Tribune reports.

Following the deaths of at least three detained kids in part due to the flu, Doctors for Camp Closure had sent a letter to federal immigrant officials offering to give flu shots to an initial group of 100 detained people for free, but their offer was ignored. "We're disappointed and frustrated," letter signatory Dr. Luz Arroyo said at the time. "But we're not going to give up that easily and will continue to request access."

They’ve kept to their word. In video from Never Again Action, doctors and advocates who gathered in front of the facility on Monday were heard chanting, “Let them out, let us in!” Nearby, a mobile flu clinic with capability to treat a large number of kids waited. “Dr. Mario Mendoza, a retired anesthesiologist, said it would take less than a half an hour to administer the vaccines to more than 100 children via the free mobile flu clinic they set up directly outside the CBP facility.”

But the flu clinic would stay unused. “It has never been a CBP practice to administer vaccines and this not a new policy,” an agency spokesperson said, yet again falsely claiming that because people supposedly aren’t “held for longer than 72 hours … operating a vaccine program is not feasible.” This is a lie: a report from the Homeland Security inspector general last month found border officials have frequently violated law to jail kids for as long as ten days.

The Washington Post revealed last month that border officials had also rejected a CDC recommendation to vaccinate kids and families in their custody, even after 8-year-old Felipe Gómez Alonzo’s death in part from flu. This is how kids continue to get sick and die—and border officials’ negligence is intentional. During the action on Monday, members of Doctors for Camp Closure pledged to keep returning to protest until families are protected.

“We have the team here. We have the vaccines. It would not take 72 hours to do,” Dr. Mendoza told The San Diego Union-Tribune. “What I can say is we are not leaving here until they let us enter. We are doctors. We are against death and we are for humanity.”

Officials have also continued to deny flu shots to detained people even as a recent report revealed that border officials lied about the circumstances around the May death of another migrant child in U.S. custody. Like Felipe, 16-year-old Carlos Gregorio Hernández Vásquez also died from the flu, alone in his cell. Children do not belong in detention period, and in absence of freedom, giving them flu shots is the least officials can do to protect them.

Across the country in Washington, D.C., Congressional Hispanic Caucus chair Joaquin Castro, physicians, and advocates also called for border officials to give detained people flu shots during an event commemorating the anniversary of the in-custody death of 7-year-old Jakelin Ameí Rosmery Caal Maquin last December. “Now that a total of three children have died with the flu, how many more need to die until they listen to us?” an emergency room doctor asked.

An emergency room pediatrician spoke out, explaining that she'd been able to review the autopsies of children dead… https://t.co/5NxmhQRIDE
— Ford Fischer (@Ford Fischer) 1575939437.0

“This has become a horrific pattern: our immigration system is killing innocent children and the Trump administration doesn’t seem to care,” said Families Belong Together chair Jess Morales Rocketto. “The administration’s cruel immigration agenda is intentionally barring life-saving medical from children by refusing to provide vaccines during flu season … we need action immediately to get children the life-saving care they need to make sure that no more kids die in cages.”