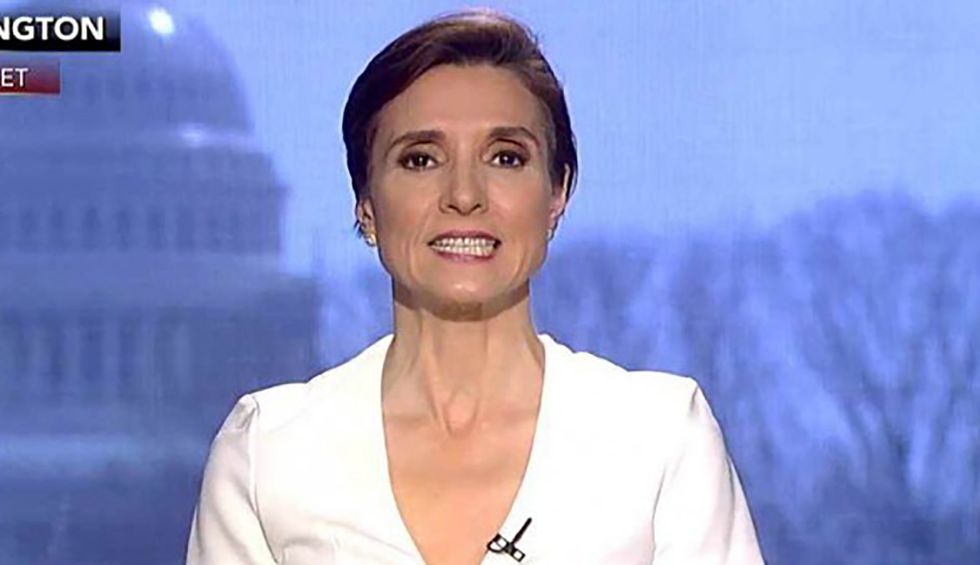 On Thursday morning, CBS announced the hiring of Catherine Herridge, who recently left Fox after working there for 23 years. Herridge was Fox’s chief intelligence correspondent and has extensive experience, making her an attractive get for CBS News. There, she’ll serve as a senior investigative correspondent covering national security and intelligence for an organization that still hews to a legacy forged in no small part by Edward R. Murrow.

This is not the kind of employee a news organization wants to lose during an impeachment process revolving around issues of national security. But the executives at Fox News have to expect it won’t be the only departure from its “hard news” side which, according to multiple reports, is increasingly at odds with the prime-time opinion portion of the operation driving its ratings success and the tone of its coverage.

Herridge’s CBS hire follows the more widely reported departure of Shepard Smith in early October, but the news about her transition over to network was muted by the more alarming development that the news website Deadspin effectively ceased to exist.

That the demise of a news site staffed by around 20 journalists would send out a larger hue and cry than the defection of a long-tenured reporter from Fox News to the news organization that brings us “60 Minutes” tells us something about that state of media as it struggles to exist today. Given the size and reach of Fox News relative to that of Deadspin, one would think the Herridge transition would merit bigger play.

The reason it hasn’t is because of the sheer defiant bravery of what the staff of Deadspin did in reaction to an abrupt, senseless shift in editorial direction imposed by the site’s new parent company G/0 Media.

As of Friday, every single one of its nearly 20 journalists resigned in reaction to the firing of its interim editor-in-chief, Barry Petchesky, when Petchesky refused to follow the mandate imposed by the site’s parent company G/0 Media.

The new owners dictated that culture and politics coverage would be handled by other sites in the G/O Media family, even though content that is not specifically sports-related often outperformed the site’s sports content.

“Programming note: My Kinja access has been revoked. I apologize for any and all spelling and grammar errors, as I cannot fix them,” tweeted former staffer Diana Moskovitz, apparently the one who turned off the lights on her way out. “From here on out, all content published on Deadspin is not us. I hope we sent out Deadspin right. We did our best.”

G/O Media, formed by Boston-based private equity firm Great Hill Partners, purchased Deadspin along with properties that formerly came under the Gawker media umbrella in April 2019. Sister sites include Gizmodo, The Root and Jezebel – all of which cover a variety of topics in ways that suit each individual site’s specific voice.

Deadspin centered upon sports, but its political coverage, for example, could be as cheeky was it was dead on target. Deadspin’s 2014 Gamergate coverage is another terrific example of an important story that would have been outside of the “stick to sports” mandate, one that exposed a shocking view of sexism and harassment in the gaming industry to the wider public.

The new management drove editor-in-chief Megan Greenwell out of her job in August, and she revealed later that executives were intimidating reporters who were attempting to report a story about the company’s takeover. Then came the massive flood of ads clogging up the site, causing longtime readers to rebel. Finally last week, the editorial staff had enough and walked.

Plenty of  tried-and-true reporters stay on in jobs they’re not thrilled about and cover stories they’d rather not cover because at the end of the day, they’re still working at places that are recognizable as bastions of journalism.

The Deadspin staffers who resigned refused a sinister, cynical order to hollow out their newsroom’s mission, one that up until now had resulted in irreverent, necessary reporting and respectable metrics, despise management’s public statements of the contrary.

Once a news organization moves away from its mission to provide its consumers with facts and information, and reworks its editorial priorities in an effort to squeeze cash out of a place, decline becomes inevitable, and shifting mandates ever more untenable.

To an outsider, asking a news site to “stick to sports” may sound like a reasonable request. But what happens when there’s a sports story that a friend of management doesn’t like?  Maybe the mandate changes a little to make sure that all future stories are entirely positive. And so it goes, until basically Deadspin and titles like it become catalogs fueled with robot content . . . exactly what it is right now.

Understand that to walk away from a journalism job with nothing lined up, even in this relatively robust economy, could amount to walking away from the profession entirely.  Full-time staff journalism jobs are hard to come by these days, with newsrooms shedding positions and print versions of magazines and newspapers pulling back their publication frequency or going entirely digital.

A person might have assumed that glossy copies of Glamour, Seventeen and Teen Vogue might always have place in a teenager’s messy room, but they ceased producing print versions this year. Entertainment Weekly only hits mailboxes monthly now. And USA Today is expected to phase out its print editions entirely at some point after New Media Investment Group acquires the national daily news publication’s parent company Gannett.

So yes, while I imagine that ditching Deadspin likely was as much of a survival move for these folks as one based upon principle — workplaces like that generally aren’t great for one’s sanity or long-term career goals — that doesn’t stop it from being a brave stand.

The private equity destruction of Deadspin is part of an industry-wide trend that’s been going on for several years and has been examined in a number of publications, including this 2017 piece by The American Prospect.

Newspapers, magazines, and websites are most vulnerable to this strain of predation. Fox News, however, is securely in the hands of the Murdoch family and continues to be one of the most lucrative media brands going. Money is not its problem. What ails it is a broken system that prioritizes appealing to the baser emotions of rabid right-wing devotees of demagogue as opposed to reporting facts.

And yet, Fox's executives and some of its anchors are very sensitive to criticisms that they're not following journalistic principles and practicing "straight news."

Fox anchor Shannon Bream responded to such critiques in a conversation with Forbes (from which G/0 Media hired a few executives connected to the Deadspin disaster, it should be noted) and opined that Fox's “straight news” division is alive and growing despite Smith's exit.

She invited viewers to watch for a week and “make their own decisions.” Media Matters took her up on that challenge; you are welcome to read its findings, watch the corresponding clips, and, as Bream says, decide for yourself.

The likes of Bream and Harris Faulkner and other anchors on the news side are probably content to stay where they are until their inevitable transitions into political consulting. Chris Wallace isn’t going anywhere either; he and Martha MacCallum are among the network’s few remaining legitimizing presences and likely have free rein to do their jobs as they see fit.

But as the impeachment inquiry moves into the public testimony phase, bringing ultimate transparency to the process, Fox’s straight news correspondents should be wondering whether it’s time to jump ship before the partisan spin gets even more out of hand than it already is.

It’s no surprise that longtime correspondent Carl Cameron left Fox in 2017 — early days into this administration, relatively speaking. Fox only became more fused with the Trump White House after Cameron’s departure, and he’s since gone on record about his dismay at how heavily the opinion side of Fox is weighted over its news operation.

In 2018 Jerusalem-based foreign correspondent Conor Powell quit Fox after nine years with the network, reportedly because he’d become uncomfortable with the direction in which the organization was going. He was replaced by Trey Yingst, former chief Washington correspondent for One America News Network.

Not long after Powell left, senior correspondent Adam Housley also jumped ship. And of course, we have the news about Herridge and Smith. Like Cameron, Herridge and Smith stuck around through the Roger Ailes era and continued to work for a news organization tilted toward conservative viewpoints while repeating their motto of “fair and balanced.”

One can understand why reporters on its hard news side may stay where they are despite the flurry of anonymous complaints to media reporters about plummeting morale and the horror at whatever Tucker Carlson said last night about Adam Schiff and bodily fluids. Attempting to practice journalism at Fox News may be a thankless job, but it’s one that pays better than most jobs in journalism or elsewhere.

For those aspiring to do work with journalistic integrity, there must come a point at which the effort to dig up facts and produce data-driven stories feels fruitless when a few hours later the talking heads on the other side of the office are ignoring that work exists. Not merely that, but perpetuating conspiracy theories, questioning the patriotism of decorated veterans, and maligning elected officials who refuse to cater to Donald Trump’s whims.

The hope is that this virulently dishonest direction has an expiration date. Provided the country doesn’t crack in half, eventually Fox News will have to make an effort to become more centrist. Not entirely (that’s improbable, if not impossible) but perhaps not as thirsty for the racist wingnut audience.

Eventually Sean Hannity, Laura Ingraham, and Carlson will be gone. Their replacements may be worse; the audience will determine that. But any reporter aspiring to do solid journalism or general respectable work should not wait for those winds to shift.

What happened to Deadspin is depressing.  Walking out of a compromised employment situation into uncertainty is downright frightening. But the example set by its staffers is heartening, I suspect they and others who take similar leaps of faith will discover that holding onto their integrity is worth far more to their careers in the long run — and that it makes for a hell of a parachute.