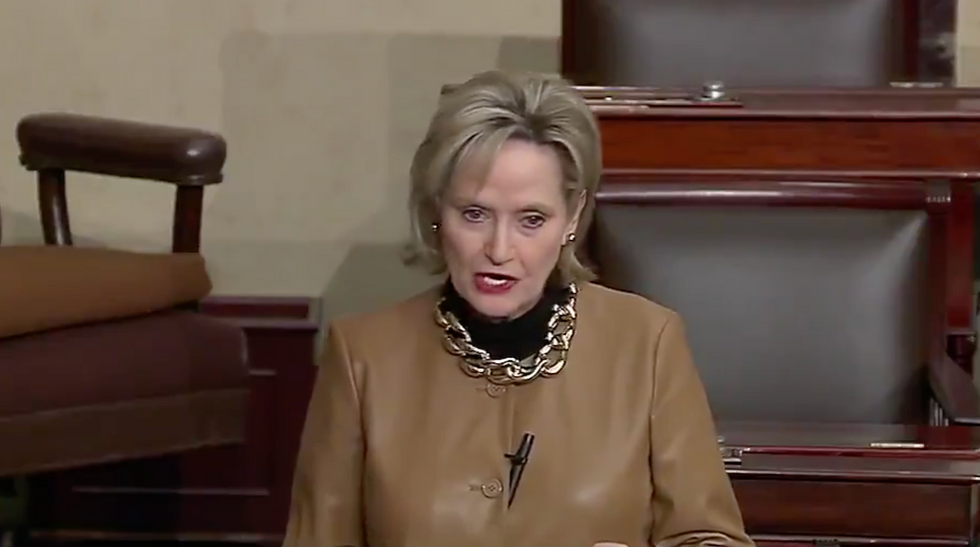 As a horrific school shooting unfurled on Thursday in Santa Clarita, California, a drama happening back in Washington D.C. at just about the same time dramatized why the environment that allows such violence to frequently occur persists.

Sen. Chris Murphy (D-CT) made a motion Thursday morning to force the Senate to vote on a bill that would extend and shore up universal firearm background checks in the United States, but Republican Sen. Cindy Hyde-Smith of Mississippi intervened to block the measure.

"I’m about to go to the Senate floor to ask for unanimous consent to pass universal background checks," Murphy said on Twitter Thursday morning. "Some will call me foolish for trying – one Republican objection and this fails. But when 100 Americans are dying from gun violence every day, inaction is inexcusable."

As expected, Hyde-Smith stepped in to thwart the effort.

"Legislation that would affect the rights of Americans under the Second Amendment should not be fast-tracked by the Senate," she said. She argued the legislation should go through the typical committee process, and she worried that the law would block her from giving her friend's children a gun.

Murphy stood up in response and said of Hyde-Smith: "The good news I can convey to her is that my Republican Senate friends who want to have some impact into the consideration of the future of American gun laws have ample opportunity to do that — because you're in the majority!"

But of course, the GOP has no real interest in passing gun legislation. But many also don't want to be seen voting against it. So they opt for parliamentary delay tactics instead.

After numerous mass shootings in the last few years, Republicans — including President Donald Trump — have signaled that they were willing to entertain and consider new gun laws to protect Americans. But every time, without fail, Republicans have backed away from these ideas as the latest shooting faded into the past, effectively adopting the National Rifle Association's position that any increase of restrictions on gun ownership is unacceptable.

And as Trump faces pressure from the impeachment proceedings in the House of Representatives, he has attacked Democrats as obsessing over the process and ignoring their legislative duties. But the Democratic majority in the House has already passed sweeping gun legislation, in addition to many other measures. In reality, it's the Republican Party's control of the Senate that is blocking popular gun regulations from being enacted.

"The American public are not going to accept silence from this body," Murphy said.