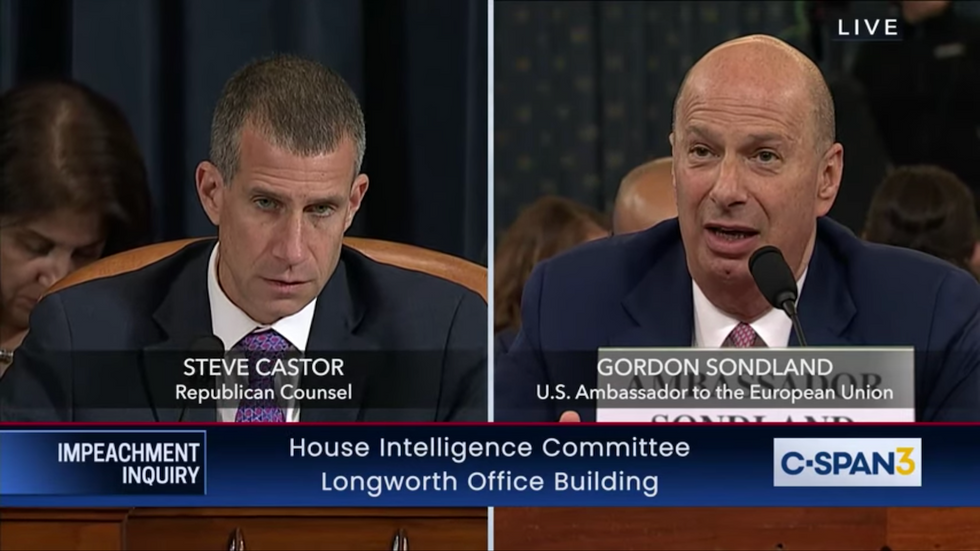 Ambassador Gordon Sondland delivered complex and convoluted impeachment testimony on Wednesday about his involvement in President Donald Trump's Ukraine scandal. He gave detailed evidence recounting the president and the rest of the administration's involvement in his effort to get Ukraine to launch investigations of Trump's political opponents — including by leveraging a potential White House meeting and a hold on military aid.

But he also, to the Republicans' delight, left some ambiguity about how much Trump had been involved in the effort to leverage the aid, saying that he had "presumed" Ukraine's announcement of the investigations would release the hold. And he noted that, in one phone call the president — as the scheme was slowly being uncovered — Trump angrily denied there was a quid pro quo.

Republican counsel Stephen Castor, serving for the minority party on the House Intelligence Committee, tried to exploit this apparent distance between Sondland's push and the president as a defense against impeachment. But at two points in his questioning, he made a key cross-examination error: he asked questions he didn't know the answer to.

The answers he got were not good for Trump's case.

First, he tried to suggest that Rudy Giuliani, the president's lawyer who worked with Sondland and others in the State Department on the Ukraine pressure campaign, may not have actually been representing the president's interests. If this were true, it might have placed greater distance between Trump and the apparent bribery scheme.

"You testified that Mr. Giuliani was expressing the desires of the president, correct?" Castor asked.

"But how did you know that?" pressed Castor. "Who told you?"

CASTOR: You testified that Giuliani was expressing the desires of POTUS, correct? SONDLAND: Yup CASTOR: But how d… https://t.co/hsRJmxIzLj
— Aaron Rupar (@Aaron Rupar)1574272261.0

Then, when Sondland was discussing his conversation with Trump, he recounted the president saying: "'I want nothing! I want no quid pro quo! I just want Zelensky to do the right thing, to do what he ran on,' or words to that effect."

"And you believed, the president, correct?" Castor asked.

Sort of an amazing moment here, where Sondland declines to say that he actually believed Trump when Trump said "I w… https://t.co/moYHqapKKW
— Chris Hayes (@Chris Hayes)1574294047.0

The most plausible inference from that claim is that Sondland wasn't buying Trump's spin.