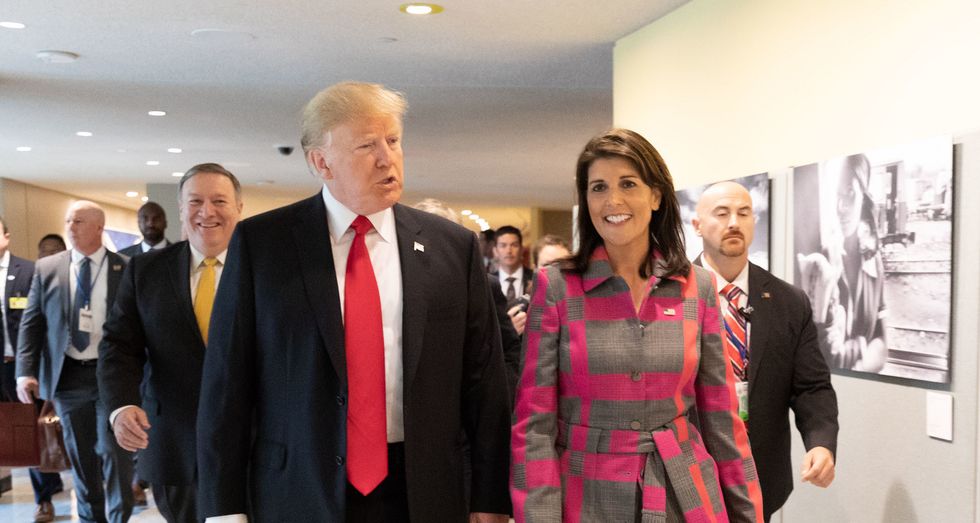 Former U.S. Ambassador to the United Nations has launched an effort to become relevant again as she promotes her new book, and in the process, she's dashing the hopes of those who believed she could be the reasonable Republican alternative to President Donald Trump. She's embracing the president and casting herself as one of his brave defenders — but her effort is actually just diminishing them both.

Her big bombshell tease from the new book, "With All Due Respect," is that former White House Chief of Staff John Kelly and former Secretary of State Rex Tillerson — both chosen by Trump — approached her while she was serving as ambassador to "save the country" from the president.

Haley, making clear she's in Trump corner, said she turned down their offer and told them to talk to the president of any objections they had to his actions. She said: "But to undermine a president is really a very dangerous thing. And it goes against the Constitution, and it goes against what the American people want. And it was offensive."

Her move seems to have won the president's favor, at least for now, as he urged fans to buy her book (something he often does for his allies, with no concern for the appearance of using the presidency to financially reward his friends):

But despite this endorsement of Haley from the president, the story doesn't really seem to reflect well on either one.

First, Haley's story — though it got some pushback from Kelly and Tillerson — says that Trump's top appointees and allies were afraid that his actions could get people killed. That's a harsh indictment of the president. And even if you want to interpret the story as showing the Tillerson and Kelly were corruptly working against the president, you have to admit that Trump — who claims he only hires the "best people" — promoted two saboteurs to the highest posts in government. Neither of these interpretations fo the story reflects favorably on Trump.

Second, the story also raises serious questions about Haley, from the perspective of Trump supporters. She's clearly trying to make herself out to be a hero in the eyes of Trump supporters. But in fact, as the conservative Daily Caller noted, many right-wing figures began questioning her conduct after she told the story. Radio host Rush Limbaugh said:

“I have one question for Nikki Haley. Did you tell Trump what Kelly and Tillerson were doing, or did you save it for the book? And if you didn’t tell Trump and you only saved it for the book–what do you mean, you know about the book?” Limbaugh asked.

“She’s published a book, and in the book the big leak is that she says that the chief of staff, Marine General John Kelly, and Rex Tillerson, the secretary of state, sought to recruit her to subvert Trump, but that she kept all of this to herself until now, until her book!” he added.

Haley has responded to these questions, asked by many, in the affirmative. She did, she said in response to the criticism, inform Trump of the problem. But again, this only pushes the problem on to Trump. Tillerson and Kelly presumably approached her while they were still in government. But Tillerson was ousted in March 2018, and Kelly stuck around until December of the same year. Even if Haley did tell Trump about the story and he immediately fired Tillerson, then that means the president kept Kelly around for about nine more months, despite knowing that his chief of staff was actively working to subvert him. Again, that's hardly a story in which Trump comes out looking savvy or strong.

And if Haley is perhaps trying to appeal to Trump critics by exposing concern within his administration, then she fails on this front as well. Why would she sit on this information, that Trump appointees feared he'd get people killed, until her book was due to come out?

Her comments about impeachment are similarly at cross purposes. She has dismissed the impeachment because Trump's Ukraine bribery scheme failed and bizarrely compared the impeachment process to the "death penalty." But she also sharply broke with Trump, who claimed his call with Ukrainian President Volodymyr Zelensky was "perfect"; she said on NBC News: "I think it’s never a good practice for us to ask a foreign country to investigate an American."

And she even seemed to offer a condescending and damning take on Trump's own defenses, saying: "In his mind, he thinks it was a perfect call." She didn't acknowledge that Trump's inability to see what was wrong in what he did is part of why his conduct is so unacceptable.

But it's hard to see what her public performance is accomplishing, other than potentially selling more books. She seems to be trying to walk a fine line, casting her self as a reasonable Trumpist, but it's not clear it's even possible to play this role.

Watch a clip of her comments below:

Nikki Haley tells Savanah Guthrie that she never had any doubt about Trump's fitness to serve or his mental acuity.… https://t.co/B7ZBOc7LgV
— Amee Vanderpool (@Amee Vanderpool) 1573578774.0