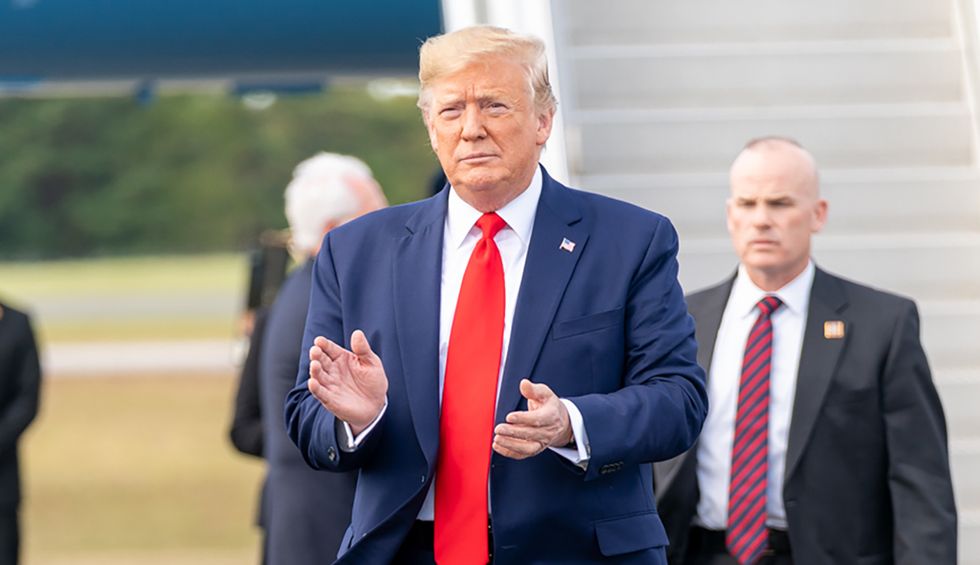 The House Intelligence Committee on Wednesday opened its historic impeachment hearing into allegations that President Donald Trump pressured a foreign country to investigate a political rival in an attempt to bolster his re-election chances.

As Democrats and Republicans offered dueling narratives on whether the president abused the powers of his office, Trump spent the morning attacking the inquiry on Twitter. He told reporters at the White House, where he was hosting Turkish President Recep Tayyip Erdoğan, that he had not been watching the televised hearings which could determine the future of his presidency.

"I see they're using lawyers that are television lawyers. They took some guys off television. You know, I'm not surprised to see it, because Schiff can't do his own questions," Trump said, seemingly referring to House Intelligence Committee Chairman Adam Schiff, D-Calif., and Daniel Goldman, the former New York prosecutor representing House Democrats in the hearings. Goldman has also previously worked as a legal commentator for MSNBC.

Trump added he expects to get a "report" on the testimony later.

Elsewhere in the West Wing, White House press secretary Stephanie Grisham dismissed the hearing, tweeting that it is "not only boring" but also "a colossal waste of taxpayer time & money."

She also told reporters that Trump was not watching the hearings.

"He is in the Oval Office in meetings — not watching," she said. "He's working."

This sham hearing is not only boring, it is a colossal waste of taxpayer time & money. Congress should be working o… https://t.co/eT7FOUvORz
— Kayleigh McEnany (@Kayleigh McEnany)1573664058.0

Trump, however, has sent nearly three dozen tweets and retweets critical of the hearing as it has been underway.

He also sent out a straight-to-camera video, in which he denounces the impeachment inquiry and insists that he's "fighting to drain the swamp."

"What's going on now is the single greatest scam in the history of American politics . . . It's all very simple: They're trying to stop me, because I'm fighting for you. And I'll never let that happen," Trump says in the video, which was shared to social media by the White House's official account.

The remarks by both Trump and Grisham remarks appeared to echo comments made earlier in the day by the "Fox & Friends" co-host Brian Kilmeade.

"Such an enormous waste of time," Kilmeade said of the inquiry. "This TV show is not them doing their job."