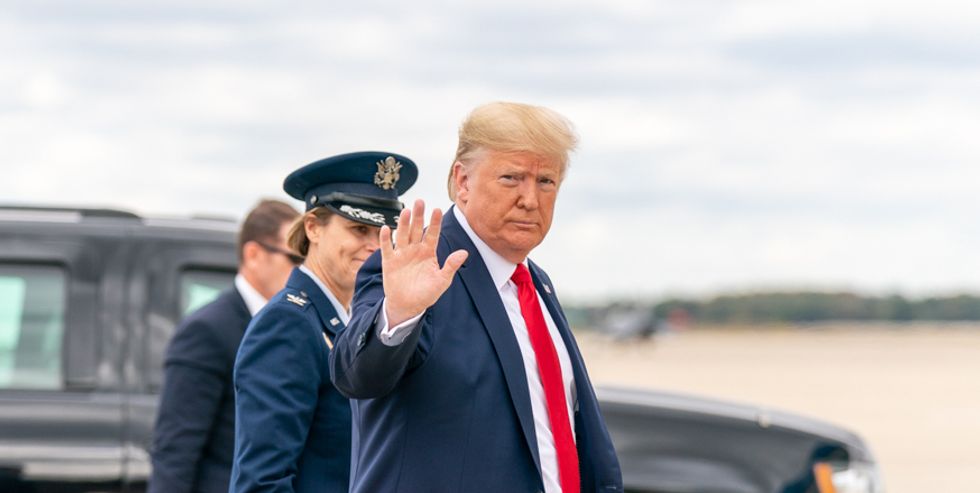 Lawyers for President Donald Trump Wednesday argued in a Manhattan courtroom that were the president to shoot someone on 5th Avenue in New York City, he could not be prosecuted while in office because of presidential immunity.

"Trump's lawyers openly declared that Trump is above all laws, including murder," tweeted Rep. Bill Pascrale (D-N.J.) in response to the news.

The exchange came during a hearing on the president's tax returns, which Manhattan D.A. Cyrus Vance Jr. is attempting to obtain to see if Trump illegally paid to silence people with damaging information to his presidential campaign in 2016. Judge Denny Chin used Trump shooting someone in broad daylight on 5th Avenue—an invocation of a Trump brag on the campaign trail in 2016—as an example of the limits of presidential immunity from prosecution.

But Trump lawyer William S. Consovoy told the court that, in fact, the president would escape prosecution as long as he were in office.

Chin: What’s your view on the Fifth Avenue example? Local authorities couldn't investigate? They couldn't do anything about it?

Consovoy: Once the president is removed from office, any local authority, this is not a permanent immunity.

Chin: Well I'm talking about while in office.

Chin: Nothing could be done? That's your position?

The D.A.'s office was not amused, according to The Washington Post:

Carey Dunne, general counsel from the Manhattan District Attorney's office, told the court "there is no such thing as presidential immunity for tax returns" and "they're making this up."

"[President Trump] may view them as embarrassing or sensitive but tax returns do in fact get subpoenaed all the time in financial investigations," Dunne said.

To be clear, Consovoy is not correct about the law. As the Supreme Court explained in Clinton v. Jones (1997), "it is settled law that the separation-of-powers doctrine does not bar every exercise of jurisdiction over the President of the United States. Moreover, the Court added that "we have never suggested that the President, or any other official, has an immunity that extends beyond the scope of any action taken in an official capacity."Thus, because murdering people on Fifth Avenue is not part of the president's official duties, Trump's immunity argument would likely fail. Similarly, because the financial information sought by prosecutors also does not relate to Trump’s official duties, Trump's claim of immunity in Vance is weak.

A number of observers expressed concern that the president believes he is above the law, whatever the legal reality.

"This is not a joke," said journalist Judd Legum. "This is real life."