Stitching together the rise of the recent feminist movement 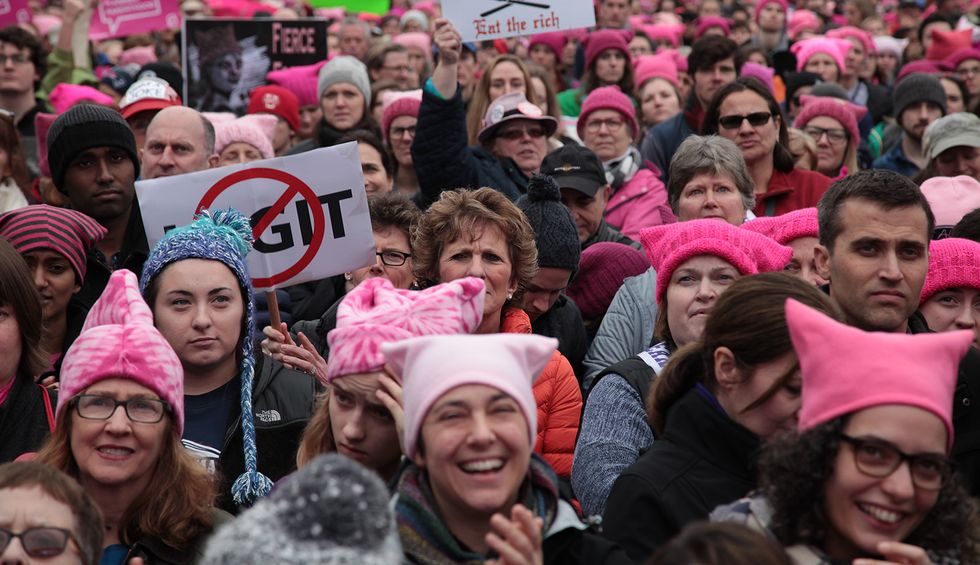 On the first night of the Democratic presidential candidate debates, as the ten candidates filled the stage one by one, my daughter rolled her eyes. “Sheesh,” she remarked, looking at the row that included Tulsi Gabbard, Amy Klobuchar and Elizabeth Warren, “there are only three women up there!” I laughed; the fact that such a number seemed low to her was a refreshing reminder of how far we’ve come and how young women today are growing up with a new sense of what is possible, and indeed, expected for female candidates.

The avalanche of women’s political participation that swept so many into office in 2018 and that continues to fuel much of the energy in the 2020 election is often traced to President Trump’s election.  The enormous Women’s March on Washington, the day after his inauguration, with its thousands of newly knitted pink pussy hats seemed to signal a fresh fury.  The #MeToo movement, not long after, unleashed women’s rage about sexual harassment and assault in the wake of revelations about Harvey Weinstein’s predatory behavior and his escape from consequences for decades.  To many observers, the swiftness and power of these two events seemed to arise out of nowhere.

But, as my new book, Speaking of Feminism: Today’s Activists on the Past, Present and Future of the U.S. Women’s Movement reveals, both of those amazing phenomena, and the power of women’s current political organizing, had a history. They relied on networks, relationships, and lessons learned from decades of movement building. Conducting in-depth oral histories with a diverse group of twenty-five feminist activists around the country, I saw in their personal and professional stories the contours of the movement’s goals and strategies since the 1980s Reagan era, when pundits declared feminism dead. The interviews allow us to understand these activists as people—what they care about and how they came to dedicate their lives to these issues. Taken together, they trace connections and provide insights into the recent history of the women’s movement, revealing how we got from a “post-feminist” world to where we are today.

The rise of social media and feminism’s use of these new tools is one thread that runs through the interviews.  Through personal histories, we see how journalists and writers like Rebecca Traister, who helped start Salon’s feminist blog Broadsheet, and Samhita Mukhopadhyay, a founding editor of Feministing, did more than create spaces for themselves to write and new ways for readers to learn; they also proved there was a large audience hungry for feminist writing. As a result, new online forums opened up, making room for even more new voices.  As Mukhopadhyay told me, “You can look at history and you know that blogs changed the game.”

Another factor that changed the landscape was the rise of women’s studies programs, which, by the late 1990s and early 2000s had become more prevalent in universities around the country.  Almost none of the women who were in their forties when I interviewed them had studied gender issues in college, but many of the women in their thirties and twenties had.  The older women did not expect to make feminism central to their professional lives; the younger women assumed they would.

One striking note in these stories that contradicts a prevailing assumption is how deeply women’s studies classes appealed not just to white, middle-class students but to working-class white women and to women of color, many of whom told me those classes were life-changing. Erin Parrish, who grew up in rural Wisconsin and dropped out of cosmetology school before attending college, said that when she took her first women’s studies class, “It changed everything for me.  It was just like everything clicked and everything made sense.  Everything that I had kind of been struggling with and trying to figure out, it just all really fell into place.”

Park Cannon was elected in 2016 at age 24 to the Georgia state legislature as one of three openly gay representatives and one of the few Black women in the legislature. As a student at the University of North Carolina, she took a women’s and gender studies class and found the professor “just so honest and real and helped me see that the stuff that I was experiencing was worth studying. It was not to be discarded….Feminism became major to me in college, and I don’t ever want to live without it.”

As blogs and social media created space for new voices, including people trained to think critically about sexism, racism, classicism, and homophobia, intense debates took shape online. When I was interviewing activists, mostly between 2014 and 2016, tension and anger were boiling over, especially on Twitter. Many activists I talked to worried about the impact of call-out culture online, fearing that it would silence women and others who were afraid of making a mistake. They also pointed out that feminists who spent time critiquing each other were not focusing their anger on people like Rush Limbaugh who were, as Emily May, the founder of iHollaback, said “destroying women’s lives on a massive scale.”

The media’s focus on the divisions within the feminist movement made the success of the Women’s March and #MeToo seem astounding at the time.  But looking back with the help of the interviews in my book, we can see that, while there was friction, activists were also learning from each other, working hard to build trust and communication, and taking responsibility for when they had made mistakes.  We see how most of them recognized that drawing connections between issues—including reproductive justice, police brutality, Black Lives Matter, transgender experiences, housing and economic development—were key to making progress.  The networks they knitted together were critical to the momentum that would emerge when Donald Trump’s election gave them a new focus and a common enemy.

The lasting effects of women’s recent political engagement remain to be seen.  We can’t know yet whether any of the women remaining on the debate stage will end up in the Oval Office.  But what is clear is that the roots of this powerful new phase of women’s organizing did not emerge out of thin air; it draws on the bold vision and hard work of a diverse and creative feminist movement that has continued to grow and develop in the decades since we were told we didn’t need feminism any more.

To read more by the author, check out her latest book:

Rachel F. Seidman, Ph.D. the director of the Southern Oral History Program at the University of North Carolina Chapel Hill, where she also holds adjunct appointments in History, American Studies, and Women's & Gender Studies. Her most recent book is Speaking of Feminism: Today's Activists on the Past, Present and Future of the U.S. Women's Movement from UNC Press. Before arriving at UNC, Dr. Seidman worked at Duke University and at Carleton College as well as in the non-profit sector in Saint Paul, Minnesota.