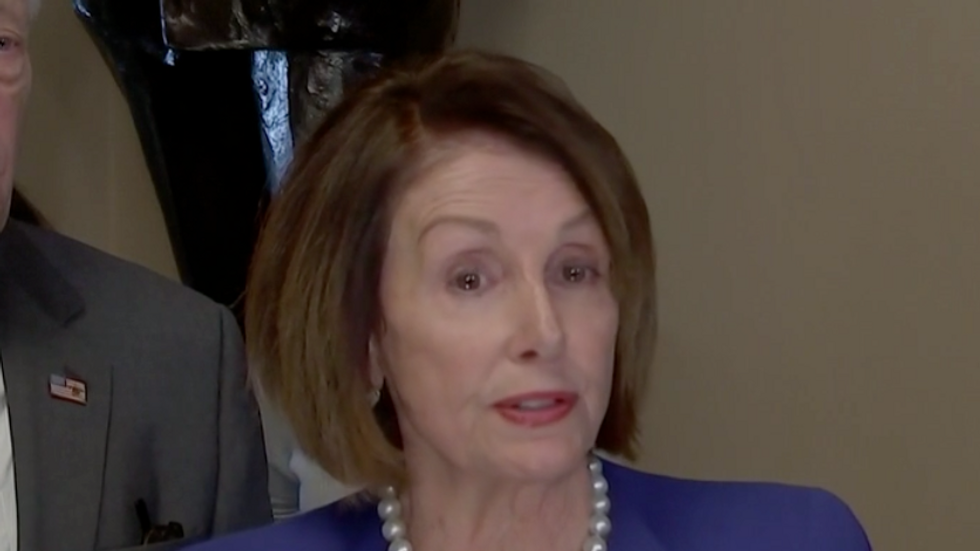 House Speaker Nancy Pelosi and Democratic Party leadership revealed that they held a contentious and combative meeting at the White House about Syria on Wednesday, in which President Donald Trump lashed out at her and others with an insulting diatribe. Republicans later blamed Pelosi and Democrats for walking out of the meeting — but they didn't deny that Trump was aggressive and insulting.

In additional comments about the episode on Wednesday, Pelosi revealed what set Trump off: talk of Russian President Vladimir Putin.

The meeting had been arranged to discuss American policy in Syria, where Trump had recently abandoned the United States' Kurdish allies to an assault from Turkey, which many fear gives Putin an advantage in the region. Trump's decision led to widespread bipartisan outrage.

"My concern that I expressed to the president is that Russia has, for a long time, wanted to have a foothold in the Middle East, and now he has enabled that to happen," Pelosi explained. "And I have concerns about all roads leading to Putin. Whether it's a foothold in the Middle East, whether it's placing in doubt any military assistance to Ukraine, which is to the benefit of Putin, whether it's placing in doubt our commitment to NATO, Article V, which again, all roads lead to Putin. The list goes on and on. That seems to have angered him."

She also strongly suggested she is worried about Trump's mental health, a concern Democratic leadership has largely avoided mentioning up to this point.