Mulvaney melts down as Chris Wallace rolls the tape of his quid pro quo admission: 'You totally said that' 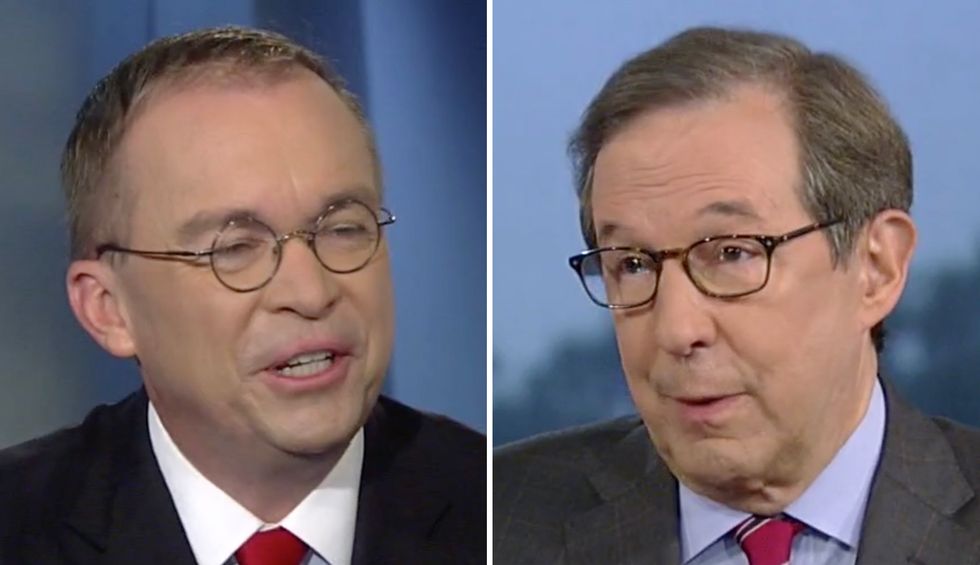 White House acting Chief of Staff Mick Mulvaney struggled on Sunday to deny earlier remarks when he admitted President Donald Trump wanted a quid pro quo for as a condition of aid to Ukraine.

During an interview on FOX News Sunday, host Chris Wallace forced Mulvaney to watch video of himself bragging that Trump held up aid to force Ukraine to investigate the Democratic Party.

According to Wallace, Mulvaney “flinched” by denying that he ever admitted the quid pro quo.

But on Thursday, Mulvaney had said that the aid was held up for “three reasons,” which he said included the Democratic Party’s server.

“I believe that anyone listening to what you said in that briefing room can come to one conclusion,” Wallace explained before replaying the tape of Mulvaney.

“That’s not what I said, that’s what people said I said,” Mulvaney pleaded. “Here’s what I said… there were two reasons that we held up the aid.

“Go back and watch what I said before that,” Mulvaney begged.

“You totally said that,” Wallace quipped. “You said what you said, and the fact is, after you had that exchange with [ABC’s] Jonathan Karl… you didn’t mention two conditions, you mentioned three conditions.”

At that point, Wallace forced Mulvaney to watch tape of himself again.

Watch Mulvaney flail throughout the interview clip below.