Is the Statue of Liberty the world's largest drag queen? 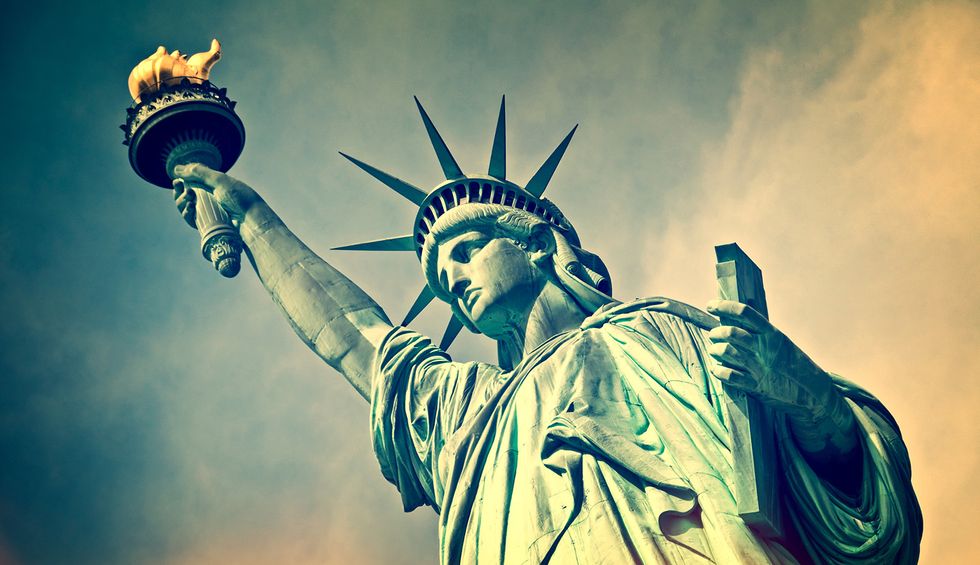 It's a classic American story. It begins with a dream, of course, a dream that that takes root in a faraway land and takes years to manifest, years of setbacks and economic hardship. But eventually, it becomes one of a woman who makes her way to the United States, where she becomes a larger-than-life icon. So if you think for one hot second that the story of the Statue of Liberty wouldn't be somehow intertwined with drag queens and Diane von Furstenberg, you don't know your history.

Premiering Thursday, Oct. 17, HBO's "Liberty: Mother of Exiles" is an insightful, emotional exploration of the most famous statute in the world, and a persuasive explainer for why she continues to captivate us, now more than ever. Framed around the construction of the recently opened Museum of the Statue of Liberty, the documentary follows Liberty's humble origins in the imagination of French sculptor Frédéric Auguste Bartholdi to her modern incarnation as a shrine, symbol of protest, and undeniable object of kitsch.

"I think it was absolutely a fitting subject for us," the film's co-director Randy Barbato told Salon via phone recently. "Overexposed and under-revealed. A subject people think they know." Barbato has got the track record to back it up. In their Emmy-winning career, he and his creative partner Fenton Bailey have  directed documentaries about such intriguing, polarizing Americans as Tammy Faye Baker, Monica Lewinsky and Robert Mapplethorpe. Their World of Wonder company also produces shows like "RuPaul's Drag Race." So when Barbato talks about the mysteries of the person who served as the model for the Statue of Liberty, it seems only right that he mentions "You know, there's a rumor it's Bartholdi's brother." That may or may not be true, but go ahead and find a greater symbol of freedom than a 300-foot drag queen. I'll wait.

"I think we're incredibly patriotic. All of our stuff is incredibly patriotic," Barbato says. He describes his recurring themes as "Americans who inspire us, Americans who have been misunderstood." Miss Liberty has fit that particular bill right from the start. The irony of a woman becoming the greatest worldwide representation of liberty was certainly lost on her earliest fans, if not the suffragists who protested her unveiling. As the film shows, her message was similarly bungled by Stephen Miller, who Trumpslained in 2017 that Emma Lazarus's famous poem "The New Colossus" "was added later. It's not actually part of the original Statue of Liberty." (It was indeed added later, but was written explicitly as part of an effort to raise funding for her pedestal.) And though she's best known for her torch and her green patina, how rarely do any of us look at her and note that she is depicted as a freed woman in active forward motion, her back heel lifted and a broken chain at her feet?

But "Liberty" isn't a mere history lesson. It is, as Fleabag would say, a love story. Because "Liberty" pays homage not just to a statue, but all those she comforts and inspires. The doc repeatedly and often poignantly identifies the people who share their stories with the nations of their family's origins. It introduces us to immigrant teens visiting her for the first time, to her caretakers on the island, to factory workers who churn out plastic reproductions, to superfans who cosplay and collect memorabilia, to the anonymous man who mounted a "Refugees Welcome" banner on her, and, notably, to her patron and official godmother, Diane von Furstenberg.

The designer serves as the film's living, breathing representation of Liberty — a child of a Holocaust survivor who came to America to build a new life. Throughout "Liberty," the filmmakers follow von Furstenberg as she journeys through the statue's past and future, encapsulated in the building of the new museum. "I remember arriving here in the morning," von Furstenberg recalls at one point, "Seeing her, Lady Liberty, and thinking, 'She's wearing a toga. It's feminine, and yet her posture is so strong.'" And clearly, giving DVF some sartorial ideas. "She did give us permission to be a little playful," Barbato notes, saying that von Furstenberg brings a certain "easy breezy, with a little bit of a wink" element to the proceedings.

That playfulness fits in with delicate balancing act that "Liberty" has to pull off, telling the tale of a figure who's both a Halloween costume and an image that can reduce a visitor to a puddle of tears. Yet the film does it repeatedly and without judgment, giving us the campiness of a David Copperfield trick and the grief of 9/11, the ideals the Lady represents and the difficult truths about the nation beyond her back. It understands that the paradoxes are who she is. They're who we as a country are — beautiful and strong and tacky and hopeful and sometimes falling apart here and there. A work in progress. An unlikely, utterly unique thing, built, as Barbato says, "to celebrate the core and essence of democracy."