Donald Trump has his finger on the button: We now know he’ll push it -- if he thinks it can get him re-elected 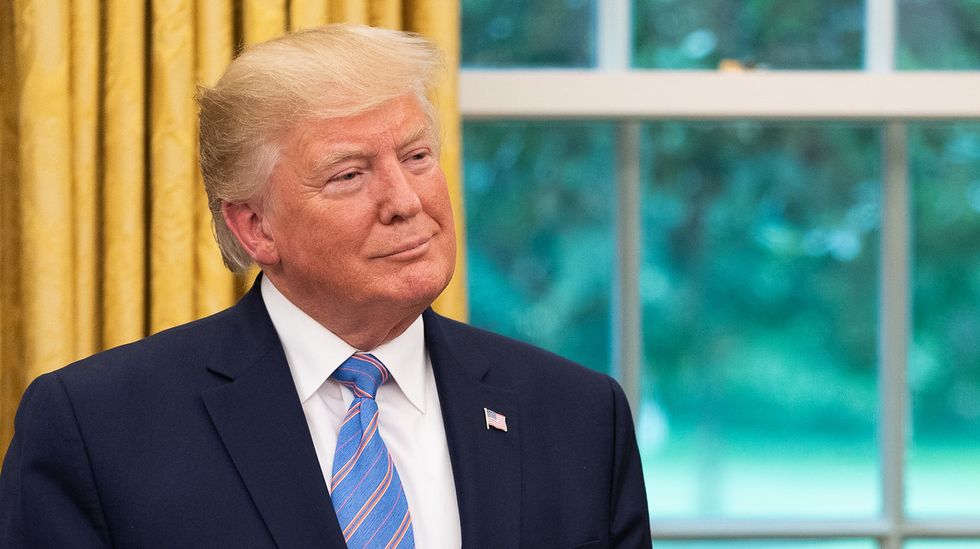 These are the most frightening words Trump has uttered since becoming president:

He said this at a campaign rally, naturally. In Texas, naturally. He tossed out the remark like just another chunk of red meat, so we can assume he meant what he said, because that’s when Trump tells us who he is, when he’s standing before an adoring crowd and he goes “off script.”

Trump’s entire presidency has been “off script,” but it’s telling when his excursions into the la-la land of his mind are this specific. He was speaking of the Kurds and the Turks, who have been engaged in bloody battles along the border between Syria and Turkey ever since Trump effectively gave Turkish President Recep Tayyip Erdogan the green light to invade Syria on Oct. 5. Kurdish forces have already lost as many as 11,000 since they began fighting ISIS alongside U.S. forces in Iraq and Syria. Now hundreds more have died, and thousands may yet lose their lives. Hundreds of thousands have been displaced and are refugees. It’s a bloody disaster that Trump refers to as a fight between children on a playground.

It isn’t just that Trump is a chickenshit draft-dodger who was famously exempted from military service because of bone spurs on his heels, and it isn’t just that he is famously disdainful of the advice of his own military commanders and foreign policy experts.

Because he is the president of the United States, he is the man who as commander in chief has the power to use nuclear weapons, and for the first time since he took office, I am afraid that he would not hesitate to use them if he thought it would help him win re-election.

What he just did to our allies the Kurds and the way he described it at his rally is all the evidence we need that he not only has no regard for human life, but he has no idea whatsoever what the waging of war is, what it means, what it does and what it costs. Just as money accrues to measure wealth, to Donald Trump, war is just another way to keep score.

Look at what he said this week when he belittled his former secretary of defense, James Mattis, during a meeting with congressional leaders. After criticizing him as “not tough enough,” Trump bragged, “I captured ISIS. Mattis said it would take two years. I captured them in one month.”

Let’s take a moment and have a look at everything that’s not merely wrong, but hideously stupid, about that remark. There is Trump’s puerile obsession with “toughness,” of course, but beyond that, there is his use of the word “captured.” What does he think the war against ISIS has been? A game of Capture the Flag? The goal of the campaign we waged against ISIS with the Kurds was never to “capture” them. It was to end their effectiveness as a fighting force, to destroy their so-called Caliphate, and to prevent them from sending their fighters to this country to commit acts of terrorism. It didn’t happen in “a month,” and it didn’t start with Donald Trump. It took years of fighting to bring ISIS to its currently weakened state. Years and many, many dead bodies, most of them Kurdish, but some of them American.

These aren’t the words of a commander in chief. They aren’t even the words of a schoolyard bully. They’re the words of a deeply and completely stupid man. Trump doesn’t bother to dumb things down for an audience like the one in Texas. It’s what he actually thinks, an ongoing sum total of all that he doesn’t know and has no interest in learning. It’s evidence that he doesn’t care about the purpose and power of waging war. He doesn’t know or care that wars kill people, thousands of people, sometimes tens and hundreds of thousands, and in the not too distant past, even millions. Command over armies and navies and air forces in war should never have been granted to such a helplessly ignorant fool.

Trump has no idea where American soldiers are in Syria, or what they’re doing. He has no idea if they are still in harm’s way. They are. He has no idea how many Kurds have been killed since Turkey invaded northern Syria, nor does he care. He has been dismissive of our Kurdish allies and what they have helped us accomplish, not only in the war against ISIS, but in bringing a relative peace back to northern Syria and areas of Iraq all the way east to Mosul. This week he dove even deeper into his well of lies when he declared that the Kurds are “no angels” and are “worse than ISIS.”

Even as Trump bragged about pulling 1,000 U.S. troops out of Syria, he sent 2,000 troops to Saudi Arabia on a mission that still hasn’t been defined, other than as an unfocused response to the recent Iranian drone attack on Saudi oil fields. He prepares to start new wars at the same time he lies about ending old ones.

All this is just more willful ignorance contained within his usual fog of lies. But it was his description of the grief of families meeting the bodies of their dead at Dover Air Force Base that was most illustrative of his abject disdain for human life. “They scream, like I’ve never seen anything before. They’ll break through military barriers. They’ll run to the coffin and jump on top of the coffin. Crying mothers and wives. Crying desperately.”

Let’s put aside the callousness of using the grief of fathers and mothers and husbands and wives. That’s a given. It’s the way he treats that grief as spectacle that illustrates Trump’s inhumanity. For him, the tableau of families witnessing the grim ritual of military bodies being returned on a cargo jet at night to American soil is just another scene in the reality television show that runs in his head 24 hours a day. Trump has no idea what a bullet or a piece of shrapnel does to a human body. He has no idea, in fact, what the death of a soldier is. His description of the scene at Dover is the worst kind of voyeurism, and yet another example of Trump’s inability to feel or express empathy.

The least you must do if you are a commander who sends soldiers into battle is to be able to understand what death is. Trump does not. It’s all just a big game for him. He likes Erdogan. He’s “tough,” he’s a “real leader.” He likes Putin. He’s “tough.” He’s a “real leader.” In the world of Donald Trump, they are in the Trump club of “real” men who understand what it takes to win and are willing to do it. He admires them because he sees himself in them.

Trump doesn’t have any more of a clue about the devastating destructive power of a nuclear weapon than he has of the effect of a single bullet on a body. That’s why he is so dangerous. He was willing to sacrifice our Kurdish allies, to kill hundreds if not thousands of them so he could go down to Texas and stand on a stage and appear tough and feed the insatiable need of his base to worship him and his falsehoods. All he cares about is how he looks — and whether he wins.

Mark my words: Donald Trump will take us to war, even nuclear war, if he thinks that is what it will take to win this election. You read it here first.