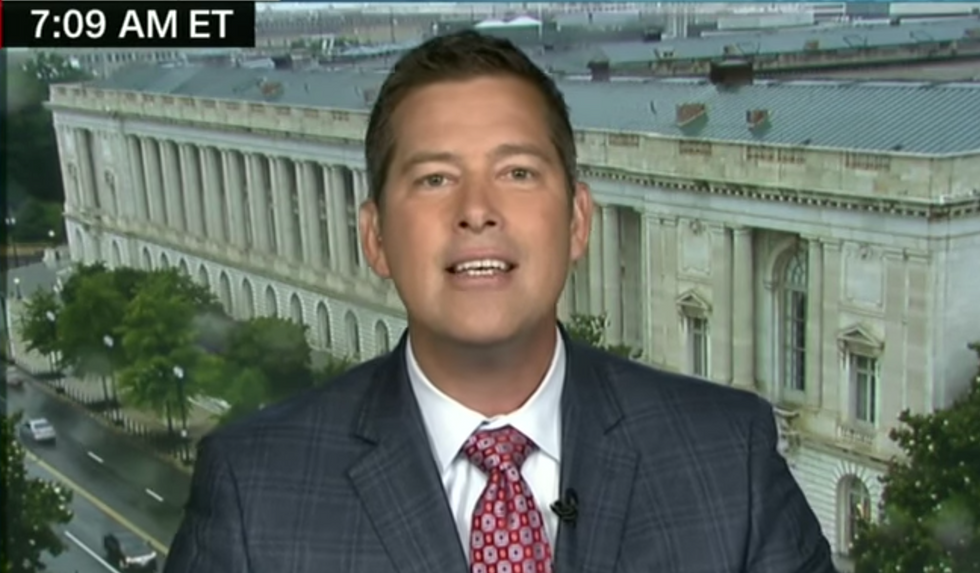 Former Republican Rep. Sean Duffy, recently hired by CNN to be a paid political commentator, can't stop fabricating facts when he goes on the air. Since making his CNN debut on Sunday, Duffy has lied about the shooting of Rep. Gabby Giffords. He's lied about Joe Biden trying to fire a Ukraine prosecutor in order to protect his son. And Duffy's helped spread the preposterous lie about the Democratic National Committee's email servers from 2016 somehow ending up in a foreign country.

Sean Duffy, who staked his congressional reputation in recent years on being an undying Trump loyalist, is not a serious person. And Sean Duffy appears to be a habitual liar. (He once claimed George Soros was rigging voting machines, and that Hillary Clinton's longtime aide had ties to the Muslim Brotherhood.) You would think those unfortunate traits would represent two large check marks against someone who wanted to be in the business of commenting on the news.

And yet, here we are.

CNN executives, having surveyed the political landscape in search of new voices to add to its discussions, decided to hire Duffy, which says a lot more about CNN than it does Duffy. What’s newsworthy about Duffy's hiring is the timing. It just seems odd since much of the press, including CNN, has moved to toughen up Trump coverage in recent weeks and temporarily abandon the hallmark timidity that has defined so much of the reporting and commentary over the last two-plus years.

"The mainstream media seems to have quietly removed its Trump-normalizing gloves in the past few weeks," wrote Washington Post media columnist Margaret Sullivan.

CNN anchors and commentators have often been part of that change. They have been out front since the Ukraine collusion scandal broke last month, emphasizing that Trump's pronouncements and denials are almost always wrapped in lies and deceptions. That's a good thing.

So why now, of all times, would CNN decide to shift into reverse and hire another Trump loyalist who cannot be trusted to be honest or state anything factual each time he appears on air? Why would CNN want to go back to playing the silly and time-consuming game of blocking off lots of airtime so conservative contributors can make stuff up, which CNN anchors then have to point out is, y'know, made up? What does CNN hope to accomplish with this?

It's all just a colossal waste of time, and CNN already tried to pull off that losing strategy for two years. Looking to capture the cable news "middle" between Fox News and MSNBC, CNN often obsesses over its Both Sides presentation. And on paper, there's nothing wrong with that. (Think: Crossfire format.) The problem is trying to find honest conservatives these days and, specifically, the nearly impossible task of finding honest conservatives who are also Trump loyalists, since that's the Both Sides debate CNN often wants to present.

CNN has hired many such Trump loyalists who have chewed up the cable news scenery, spreading lie after preposterous lie. That includes people like Jason Miller, Jack Kingston, Ed Martin, Jeffrey Lord, and Corey Lewandowski, among others. None of them, to be generous, covered the network in glory. Following the 2018 school massacre at Parkland High School in Florida, Kingston claimed on the air that students who rallied against gun violence were being taken advantage of by "left-wing gun control activists" led by billionaire George Soros.

It all badly muddies the waters, because by allowing—and paying—people like Duffy to disseminate nonsense like he's already spewed about DNC servers, CNN is legitimizing that lie, even when it’s fact-checked. "First of all, what you are stating is completely inaccurate and factually wrong," CNN contributor Jen Psaki told Duffy when he started in with the server conspiracy. "It's a conspiracy theory on the right-wing blogs." And frankly, that's where that garbage should stay.

By hiring someone like Duffy at this juncture, it appears CNN has learned very little since 2017, and specifically very little about how to cover a liar like Trump. It's not up to CNN and other media players to hire bad actors simply because the conservative movement is filled with bad actors. All news outlets ought to have easily identifiable standards, and if would-be paid contributors can't meet those standards, they should not be hired.

Keep in mind that CNN remains under constant bullying attacks from Trump and the entire conservative movement. Last year, the White House lashed out at CNN by pulling reporter Jim Acosta's press pass. Trump routinely defames the network on Twitter. And just last week, Trump's personal attorney sent a ridiculous threat to CNN, threatening to sue the network for its "biased" coverage of Trump. ("Never in the history of this country has a President been the subject of such a sustained barrage of unfair, unfounded, unethical and unlawful attacks by so-called ‘mainstream’ news, as the current situation,” etc.) Lawyers everywhere mocked the move as deeply unserious, but the cumulative effect adds up.

And that makes Duffy’s hiring even more distressing. It certainly seems to send a signal that “working the refs” is an effective strategy, and that if Republicans complain loudly and long enough, the cable news channel will bend, in small ways, to the GOP's will.

Recall that back in January, CNN seemed to make a similar and equally misguided concession to Trump when it hired a hyper-partisan Republican flack with no experience in journalism to oversee the network's campaign news coverage. After a public outcry, CNN changed the Republican's job duties.

Note to CNN: It's not too late to do the same with Duffy.