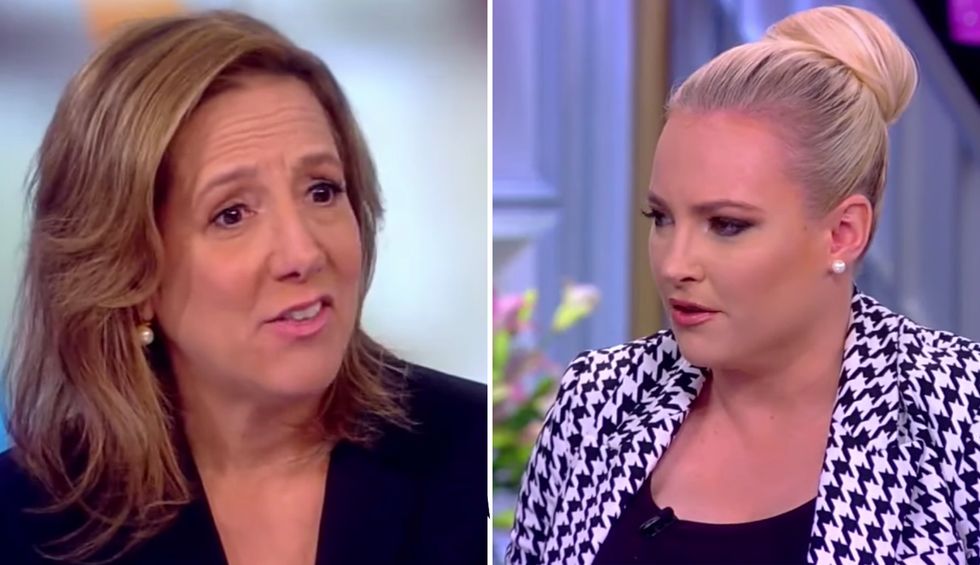 The authors of a new book about U.S. Supreme Court Justice Brett Kavanaugh appeared on “The View” to explain some of the controversial aspects of an excerpt published by the New York Times.

Co-host Meghan McCain pressed authors Robin Pogrebin and Kate Kelly, whose book The Education of Brett Kavanaugh was published Tuesday, to explain an editor’s note that conservatives have argued invalidates some of their bombshell reporting about sexual misconduct allegations against the justice.

"Thank you for the question,” Kelly explained. “We’re eager to clear the air on this. First of all, there was no desire to withhold important information from our readers. We have all of it in the book and the essay is an adaptation of the book that of course we had to edit for length and clarity.”

“The thrust of the essay was about — probably a bad word choice — the point of the essay was about Debra Ramirez, a woman who had gone to college with Justice Kavanaugh and had this experience where she alleged that he exposed himself to her and it was a very troubling event, and we lay out all the reasons why that was, not just the moment itself but the experience she was having at Yale being very difficult,” Kelly added.

While reporting the book, they heard that Kavanaugh had exposed himself to another woman in a similar way, and they included those allegations because of the similarities — and Kelly said some information about those accusations were cut during the editing process, and were not intended to be deceptive.

McCain asked why they included the alleged victim’s name if she did not come forward with the allegations herself.

“Her name is in the book because we think it’s relevant information,” Kelly said, “and we think it’s accurate and we know that her name was provided to members of the Senate and the FBI by a witness named Max Stier, who is a good governance activist in Washington who’s a respected figure.”

McCain and fellow conservative Abby Huntsman were troubled by Stier’s past work as a member of President Bill Clinton’s defense team in the late 1990s, and they asked why that was not initially reported in the Times excerpt.

“I understand it’s relevant background,” Kelly agreed. “In this case it was a very short mention and we only talked in brief terms about what he’s doing right now, so we didn’t see all of that context to be necessary, but I understand why you’re bringing it up and I think it’s fair.”

The reporters said Stier’s name, and the second alleged victim’s reluctance to come forward, were removed in the editing process, in part to take the woman’s name out of the draft.

“As soon as we realized this, we corrected it and they wrote an editor’s note and they restored it,” Pogrebin said.

Pogrebin also revealed that she drafted a tweet sent out by the newspaper that was widely criticized as belittling the allegations against Kavanaugh, and she explained how it got posted.

“It was a misworded tweet, but what happens at the Times is the reporters are asked to draft Tweets and we’re also asked to draft headlines,” Pogrebin said. “They don’t always get used, sent out, they often don’t.”

She said her intent was nearly the opposite of the tweet’s reception.

“I drafted this with this in mind to have actually the opposite effect,” she added, “which is to anticipate those who would say, ‘A guy pulling down his pants at a party when they’re drunk is on the spectrum of sexual misconduct. It’s not sexual assault. It’s not rape. What’s the big deal?’”