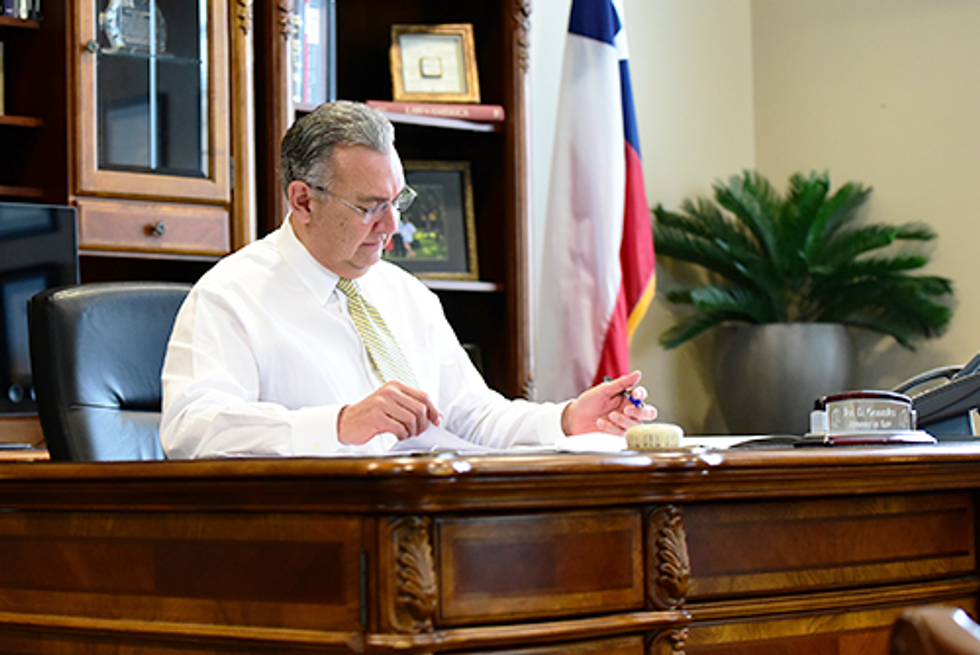 Bexar County, Texas, home to San Antonio, once rested in the picaresque clutches of District Attorney Nico LaHood, an Islamophobic anti-vaxxer. His electoral defeat in the 2018 Democratic primary to then-defense attorney Joe Gonzales was accompanied by much fanfare.

But Gonzales’ declaration last week that a $100,000 funding influx to crack down on marijuana possession is a “move in the right direction” demonstrates he may only be more respectable, not a real improvement.

LaHood himself had been elected in 2014 as a supposed ally in drug policy reform. Locals had their hopes up that LaHood would get the need for change—after all, he had personally benefited from a deferred adjudication for selling ecstasy as a nightclub bodyguard in his 20s. Given Texas’s draconian drug laws, this was quite a break. (Notably, LaHood’s father was a local judge.)

What Bexar County’s citizens got instead was a top cop who spent his one term dashing around from meetings to racist radio shows to the occasional death penalty trial. “I’m a conservative guy,” LaHood told a local hard-right radio show host. He told another that the truest form of Islam was terrorism, and regularly prostelyzied as a fundamentalist Christian on Facebook. He told the local FOX affiliate that the local paper of record, the Express News, was “out to get him,” and blocked its reporters from covering DA pressers.

Arriving uninvited at one city hall meeting, LaHood karate-chopped a table, yelling that he would “never support” the legalization of marijuana.

He even managed to get a spot on Vaxxed, the notorious anti-vaxxer documentary. “I’m Nico Lahood, I’m the Criminal District Attorney of San Antonio, Texas,” he said, “and I’m here to tell you vaccines can and do cause autism.”

Amid this chaos, Joe Gonzales, who stopped being LaHood’s friend after LaHood threatened to destroy his law practice, was touted as a reformer—for real this time.

Shaun King’s Real Justice PAC, which often tries to primary Democrats who veer conservative as elected law enforcement officials, said in its endorsement announcement that Gonzales “believes that drug addiction should be treated as an illness not a crime.”

DA Gonzales’s intent to throw more funds at marijuana possession prosecutions contradicts these promising moves, inviting questions about what he has actually done to better his community.

Since taking office early this year, Gonzales had sent the right signals, too. In July, he signed onto an amicus brief from law enforcement leaders across the country that supports Safehouse in its legal fight to open the country’s first safe consumption site.

A month later, Gonzales signed onto an open letter from reform-minded law enforcement slamming US Attorney General Bill Barr for launching a salvo against Boston DA Rachael Rollins and others. (Rollins ran her 2018 campaign on a broad declination policy for both drug possession and drug possession with “intent to distribute” charges.)

Unfortunately, DA Gonzales’s announcement of his intent to throw more funds at marijuana possession prosecutions simply contradicts these promising moves, inviting questions about what he has actually done to better his community since beating LaHood. The funding will not undo other diversion and non-prosecution policies; instead, the $100,000 grant will help lab techs who coordinate with prosecutors differentiate between hemp, which is now legal in Texas, and marijuana, which is not.

In May, Gonzales did announce a new “Cite and Release” policy for possession of under four ounces of marijuana (and a few other minor offenses), meaning people would only get cited by police, then diverted with the opportunity to clear their record. He also noted that he would stop charging people for less than one ounce.

LaHood was also willing to try cite-and-release as a pilot program—and it is mainly theoretical, since he did not bother to coordinate his plan with the San Antonio Police Department. But even then, Gonzales had to be pressured by a large grassroots coalition before taking any action.

With new funds now dedicated to marijuana possession enforcement, it’s getting hard to argue that Gonzales’ appointment has been a net win.

The whole point of the “reform DA” concept is that legislatures are too slow on fixing the mass incarceration crisis, while prosecutors can use their discretion to be less punitive instead of maximally barbaric. Perhaps surprisingly, it is a sparklingly new idea. As recently as 2007, the very concept of a reform DA was alien; it only really took shape in the public imagination in the last few years.

Gonzales was only elected thanks to local and national supporters’ belief that he would transform the local criminal justice system for the better. If he is not prepared to do that, an army of activists will be itching to replace him.