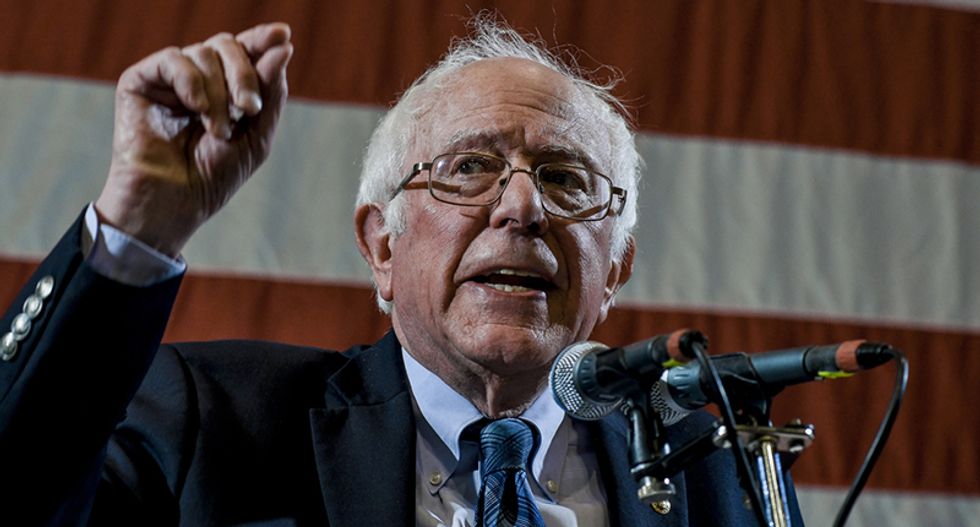 Last week Bernie Sanders released his version of the Green New Deal—a $16.3 trillion 10-year plan to get down to zero carbon in the power industry and in transportation. Right on schedule, the neoliberal establishment pounced on it as "too expensive," not "realistic" and not "prudent." Just as they had with other proposals that would have averted the certain physical and fiscal disaster that climate change will cause.

While the neoliberals are posing as prudent, the nature of their attacks on the GND shows they are anything but. Exhibit A has to be the Washington Post's anti-GND screed/editorial published on Aug. 25. It violates nearly every tenet of good journalism. For starters, it is really more of an ad hominem attack on progressivism in general and Sanders in particular than it is a reasoned challenge to the GND. But then it goes on to make so many false statements it risks becoming a parody.

There is one part of Sanders' GND that is off base, but you won't see the Post or the rest of the neoliberal mafia pointing it out. His estimates of the cost of failing to address climate change grossly understate the real costs. Sanders' plan suggests we'll save some $70 trillion over 80 years, and avoid $34.5 trillion in lost economic activity. It's not clear whether these are additive, but it doesn't matter. The fact is that a 3.7°C increase in temperature—a bit less than the path we're on right now—would result in over $551 trillion in damages.

Let's take a look at some of the Post's more egregious distortions.

Finally, the Post includes this gem: "Only about 6.1 million people are unemployed in the United States. Though some currently employed Americans could try to trade up to the cushy gigs envisioned by Mr. Sanders, many of them would not have the skills required to weatherize homes or install solar panels."

This reveals the ugly hidden truth behind the neoliberals' dislike of the GND or Medicare for All or any of the progressive's plans to give working Americans a fair shot at getting some of the massive wealth that's gone to corporations and the ultra-wealthy since the Reagan era.

First, the Post seems to think that any job paying a living wage is a "cushy gig." Second, the stats on unemployment don't count those not currently seeking work, so there's more than 6.1 million folks who might enter the labor force if they had a shot at a good job. Third, many folks who are employed are being exploited in freelance or contract jobs with no benefits and no protections. Fourth, wages—despite miniscule gains in the past few years—are essentially unchanged from where they were in the early 1980s. Fifth, the training required to install panels or weatherize homes isn't rocket science... and Sanders' plan includes money for training.

Bottom line—a little job pressure is a good thing for people, but not so good for corporate America and those who are reaping virtually all the profits from it now at the expense of labor.

The Post's objections are not unique. The mainstream press is littered with similar sophistry, and the Democratic Party's neoliberal establishment is repeating them endlessly, as is the network of think tanks, foundations, and not-for-profits that makes up the Democratic Party's establishment. In a sense, these groups are even more dangerous than the deniers in the Republican Party's camp. As evidence that climate change is happening now piles up, the deniers are increasingly like the guy who says, "Who you gonna believe? Your lying eyes or me?"

But prudence? That seems reasonable.

What's going on here isn't about prudence. It's about the status quo keepers of the corporate flame—and the Democrats and Republicans who have been representing them—trying to hold onto a system that is literally killing us, even as it exploits us.

But why, you might ask, do we have to resort to such radical action? Why not a more measured response—a more "realistic" or "prudent" one?

The reason is because "realists," "pragmatists," and the "prudent" have been adding and abetting climate deniers with appeals to slow walk the implementation of solutions for decades now. And with each delay, the cost has gone up... and this is our last chance. Very soon, no amount of money will save us.

The thing is, most of these "realists"—including the DNC, House Speaker Nancy Pelosi, and the rest of the neoliberal Democrats—seem more concerned with campaign contributions than they are with prudence. When they ridicule so-called radical ideas like the GND, and invoke prudence, they're suggesting we can negotiate with the inexorable forces of physics, but you can't negotiate with physics... that's a loser's game if there ever was one.

A look at the history of this issue will show why a GND of the scale that Sanders is proposing isn't radical; it's necessary.

Back in 2007, IPCC chair Rajendra Pachauri said: "If there's no action before 2012, that's too late. What we do in the next two to three years will determine our future. This is the defining moment."

But of course, in part because the realists and the prudent played into the hands of right-wing wackos, corporate shills, and deniers, we didn't act. The neoliberals claimed it would be prudent to avoid doom and gloom, to speak about climate in reasonable terms, and too many scientists agreed.

By the time 2012 came around, we hadn't acted, and Dr. Pachauri's warning was conveniently forgotten by most. One who didn't forget, Elizabet Kolbert, environmental writer for the New Yorker, had this to say: "It may seem impossible to imagine that a technologically advanced society could choose, in essence, to destroy itself, but that is what we are now in the process of doing."

But the prudent among us clucked their tongues at such intemperate statements, marshalled their accusations of doom and gloom or the need for realism or balance or some other verbal talisman designed to calm the mind and neuter the spirit, and so, we once again, failed to act.

In 2015, the world committed to the Paris agreement—an extraordinary political achievement, but a woefully inadequate response to the reality of the physics of climate change. And of course, in a battle between physics and politics, physics always wins. Now, the U.S. has withdrawn from the agreement, and almost no nation is on track to meet the voluntary pledges they agreed to. Meanwhile, the last few years have seen record-breaking increases in atmospheric concentration of carbon dioxide, and rapid increases in atmospheric methane concentrations.

Now, even the staid and conservative IPCC says we are on the brink of a global ecological disaster and only radical, immediate action taken at an unprecedented scale can avert it.

The time for measured or reasonable or "realistic" responses has come and gone. But the leaders of the Democratic Party, the mainstream press, and many in the paid punditocracy are still asking if we can "afford" to implement a program that is—quite literally—necessary to salvage a planetary life support system capable of sustaining civilization as we know it.