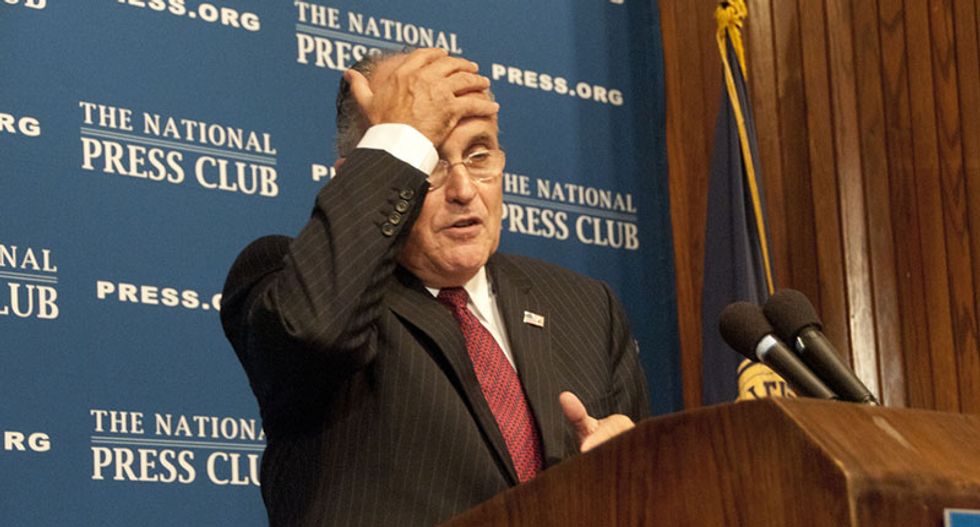 Trump and his apologists have a very clear strategy for deflecting attention from his corrupt attempts to pressure the president of Ukraine to manufacture a scandal surrounding Joe Biden: Create a lot of smoke around the former Vice President's efforts to pressure the Ukrainian government to dismiss a former prosecutor named Viktor Shokin--and around Hunter Biden's work for a Ukrainian gas company--and then insist that there must be a fire. As I wrote earlier this week, it's a tried and true strategy.

In their zeal to beat Joe Biden in the 2020 Democratic primaries, some voices on the left seem all too happy to help with that effort.

Facts should still matter, and it's important to state clearly that there are no serious allegations of corruption against either Joe Biden or his son unless one defines the word so broadly as to lose all meaning.

Trump's charge against Biden the elder is transparently false. Trump accuses him of committing the same crime as he himself apparently did--using the power of his office to coerce Ukraine into firing Shokin to protect his son. But in pushing for the dismissal of Shokin, Biden was representing the position of not only the entire US government, but also much of the international community in arguing that that Shokin routinely turned a blind eye to corruption among Ukraine's elites.

I was an Assistant Secretary of State when this happened. All of us working on Ukraine wanted this prosecutor gone,… https://t.co/8lvoaNdzOW
— Tom Malinowski (@Tom Malinowski)1569435543.0

Not only was Biden not freelancing, but according to Vox, the threat that he ultimately transmitted to the Ukrainian government originated in the US embassy in Kyiv.

Concern at the embassy mounted, and by 2016, officials there began suggesting the Obama administration push for the prosecutor general’s ouster. In particular, the embassy suggested that $1 billion in loan guarantees the country hoped to receive from the US in order to stay solvent should be tied to a tougher anti-corruption strategy that involved removing officials seen as blocking progress, namely Shokin.

Shokin was sacked by the Ukrainian parliament soon after. At the time, The Irish Times reported that "the European Union has welcomed the dismissal of Ukraine’s scandal-ridden prosecutor general and called for a crackdown on corruption... Ukraine’s parliament voted overwhelmingly to fire Viktor Shokin, ridding the beleaguered prosecutor’s office of a figure who is accused of blocking major cases against allies and influential figures and stymying moves to root out graft."

Bloomberg, citing Ukrainian officials, reported that Shokin's purported investigation into the gas company Hunter Biden worked for had been dormant for over a year when his father called for the prosecutor's firing.  Which brings us to a key point flagged by Vox's Sean Collins: Joe Biden's move ran contrary to his son Hunter's interests in laying low.

The evidence suggests Biden actually may have placed his son in legal danger by advocating for the prosecutor’s removal because he was widely accused of stymying anti-corruption efforts in Ukraine — replacing him could have led to further investigations into a company Hunter Biden had ties to.

That brings us to suspicions that Hunter's cushy sinecure with a Ukrainian gas company was shady in the first place. There's an instinctive view that this arrangement must be inherently corrupt, and there's certainly a kernel of truth there. Hunter joined Burisma Holdings when it was already engulfed in controversy, and he reportedly made a bunch of money sitting on the company's board which at least raises the appearance that something was untoward. And in the big picture, he certainly ended up in that position because his last name is Biden.

But there is an important difference between actively leveraging one's connections to a powerful politician for personal gain and passively benefiting from winning the sperm lottery--being the son of a US Senator and growing up in the elite circles in which such people travel.

According to what we know at present, Hunter Biden leveraged his relationship with a business partner, Devon Archer, to secure that directorship. Hunter had grown up in elite circles, attended elite schools and made powerful connections along the way--John Kerry's son was also a partner in the firm that they'd established seven years earlier--and that, rather than some explicit act of corruption, is how he landed the gig (he had also reportedly consulted with Burisma prior to joining the board).

Is that corrupt in a figurative sense? Absolutely. It's an example of how anti-meritocratic our society is--a classic illustration of how wealth and power get reproduced from generation to generation. But it is not corruption in a literal sense. On average, the Fortune 500 company has nine board members who make around $250,000 per year for 4 hours of work per week. Many of them are, like Hunter Biden, well connected attorneys and businessmen who give their companies some form of clout. It's gross, but it's not uncommon nor illegal.

Personally, Biden would be among my last choices for the Democratic nomination. But it's important to understand that the same playbook will be used against the party's candidate whomever it may be, and to push back against rather than reinforcing  these kinds of smears. That's especially true when they are being deployed in the service of defending Trump's own actions.

Facts should still matter, and the fact is that independent journalists, Ukrainian anti-corruption activists and the country's former top prosecutor all agree that there was no wrongdoing on the part of the Bidens.