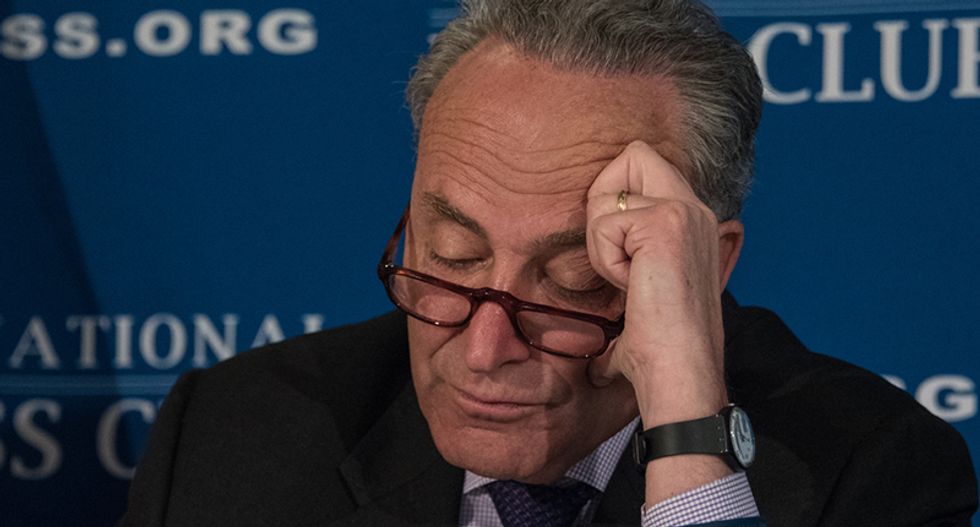 Senate Minority Leader Chuck Schumer, D-N.Y., on Monday requested that the Republican-controlled Senate conduct hearings and issue a subpoena to the White House in response to a secret whistleblower complaint about President Donald Trump's alleged request that Ukraine investigate one of his political adversaries.

In a letter to Senate Majority Leader Mitch McConnell, R-Ky., Schumer said the Senate should hold hearings to determine what prompted the whistleblower to file the complaint, as well as to probe any connection between the administration's decision to withhold $250 million in aid to Ukraine and Trump's reported request that the country investigate former Vice President Joe Biden's involvement.

"The issue here is whether Mr. Biden used his position as vice president to help a Ukrainian energy company that was paying Hunter Biden by pushing for the ouster of a Ukrainian prosecutor. The prosecutor’s office had oversight of investigations into the oligarch who owned the company," Kenneth P. Vogel reported in the New York Times. " . . . No evidence has surfaced that the former vice president intentionally tried to help his son by pressing for the prosecutor’s dismissal."

He also asked McConnell to compel the upper chamber to issue a subpoena to force the administration to turn over the whistleblower complaint to Congress "as required by law." In addition, he demanded that he "insist that the Department of Justice provide any legal opinion or other guidance it has given regarding the administration's obligations to transmit the whistleblower complaint to Congress."

Schumer noted that the whistleblower complaint was labeled "urgent" and "credible" by the intelligence community's inspector general, who is a Trump-appointee.

"The Republican-led Senate has remained silent and submissive, shying away from this institution's constitutional obligation to conduct oversight," he wrote. "The Republican Senate's 'see no evil, hear no evil' attitude such a serious national security concern is unacceptable and must change."

House Intelligence Committee Chairman Adam Schiff said last week that Maguire refused to submit the complaint to congressional panels after consulting with officials at the Department of Justice. He has demanded Maguire's testimony and a copy of the complaint; his panel is set to hear from Maguire about the complaint this Thursday.

It remains unclear if the White House was involved in preventing the disclosure of the complaint.

Members of the House Intelligence Committee met with the intelligence community's inspector general behind closed doors last week but did not receive information about the complaint's contents.

House Speaker Nancy Pelosi, D-Calif., who has been cautious of calling for impeachment, has faced increasing pressure to drop her long-standing opposition to the move amid reports that Trump used the presidency to strong-arm a foreign leader into investigating Biden.

In a letter to lawmakers on Sunday, she warned of a "new stage of investigation" if the complaint was not submitted to Congress, arguing that administration was "endangering our national security and having a chilling effect on any future whistleblower who sees wrongdoing" by refusing to do so.

More than half of House Democrats have called for an impeachment inquiry over Trump's alleged obstruction of former special counsel Robert Mueller's probe. Schiff, who has also been reluctant to back impeachment, said Sunday that if the allegations were true, impeachment "may be the only remedy."

Trump, meanwhile, has denied asking Ukraine to investigate Biden, but the White House has not released the complaint or a transcript of the call.

The president told reporters Sunday that he would "love" to release a transcript of his call in July with Zelensky, which he argued was "perfectly fine and routine," but said "you have to be a little shy about doing it."

"The conversation I had was largely congratulatory, with largely corruption, all of the corruption taking place and largely the fact that we don’t want our people like Vice President Biden and his son creating to the corruption already in the Ukraine," he told reporters.

Earlier on Sunday, Secretary of State Mike Pompeo and Treasury Secretary Steven Mnuchin rejected suggestions to release the transcript, stating it would be "inappropriate" to do so.