Truckers are facing a 'bloodbath' in their industry — and it's turning many in the pro-Trump group against him: report 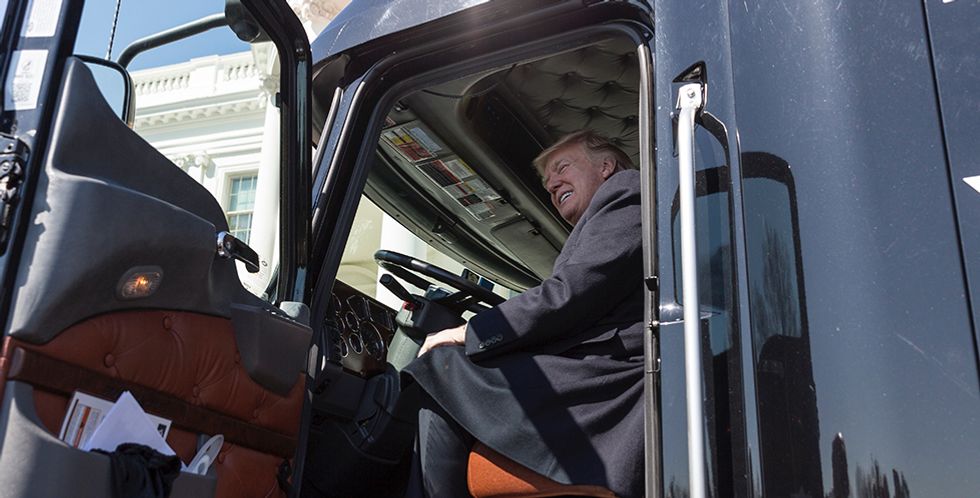 President Donald Trump sits in the driver’s seat of a semi-truck as he welcomes truckers and CEO’s to the White House, Thursday, March 23, 2017, to discuss healthcare. (Official White House Photo by Benjamin Applebaum)
Cody Fenwick
August 20, 2019

Truckers are numerous, conservative, and hurting. And despite their widespread support for Donald Trump's candidacy in 2016, a new report from Business Insider suggests the pain in the industry might be turning these workers away from the president.

The political trends in trucking are not insignificant. According to the American Trucking Associations, there were an estimated 3.5 million truck drivers in 2018. RTS Financial has found that there are 7.4 million jobs total "tied to the trucking industry." And Business Insider reported that nearly 90 percent of truckers are registered voters, higher than the general population.

Compare those figures to the number of coal miners — a little over 50,000 — an occupation that has received vastly disproportionate attention in American politics given its size.

And as the manufacturing sector in the United States falters and economists warn that the risks of a recession are increasing, the trucking industry is taking a hit.

“The freight industry is currently experiencing a recession, which began in October 2018,” writes Aaron Terrazas, Convoy director of economic research, in a report published Thursday. (Convoy is a new digital marketplace trying to make the traditional truck brokerage industry more efficient, especially when roughly a third of all miles truckers drive are empty, Terrazas says.) Freight volumes have been falling since last fall, he adds.

Morris Coffman, a trucker for 35 years, told Business Insider that the industry is in the midst of a "bloodbath."

"I have witnessed many ups and downs in the industry but nothing like this," Coffman said. "Many, many owner-operators and drivers have either lost equipment or lost a job in the last year."

It's not just the industry's struggles alone causing the problems; it's also the Republican Party's 2017 tax bill. While overall the bill should have reduced most American's taxes — even the change wasn't noticeable — some of the changes fell especially hard on truckers:

Trump's tax reworking in 2017 led to many truck drivers having to pay hundreds in taxes this year, thanks to a change in per-diem laws. Dennis Bridges, an accountant who specializes in doing taxes for truckers, told Mother Jones in April that 75% of his clients saw an unusually large tax payment, and about 20% had to fork over more than $5,000.

Business Insider noted that while the trucking industry is one of the most conservative jobs in the country, these trends appear to be turning off many from the president's policies.

"[Trump] is absolutely a moron," Coffman said. "His idiotic ideas will tank the economy even further."