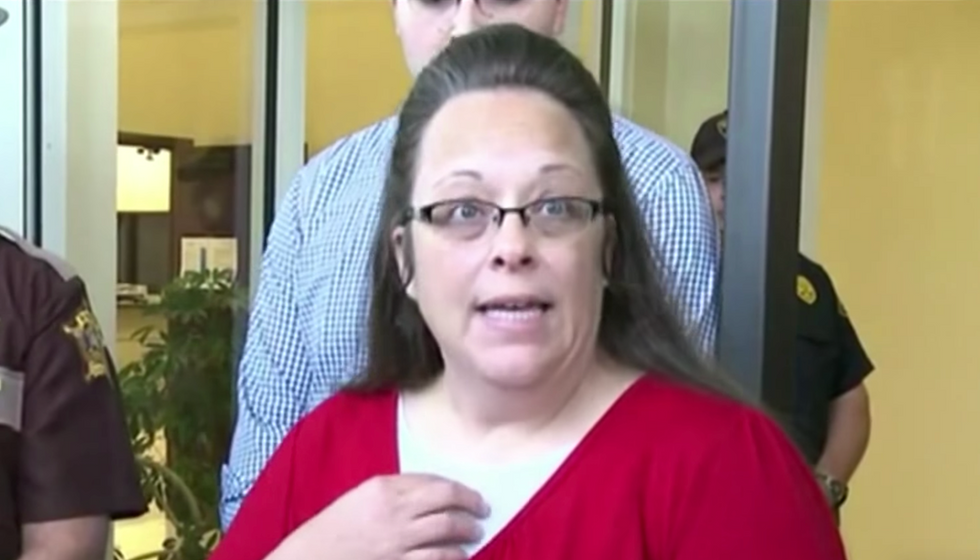 In 2015, Christian fundamentalist Kim Davis (who was serving as clerk of Rowan County, Kentucky at the time) was praised by the right wing after refusing to issue marriage licenses to same-sex couples — a violation of federal law. The U.S. Supreme Court had just, in effect, legalized same-sex marriage all over the country with its ruling in Obergefell v. Hodges. Some same-sex couples filed a lawsuit in response, and a federal appeals court has reaffirmed that the State of Kentucky will have to pay a hefty amount thanks to Davis.

The U.S. 6th Circuit Court of Appeals in Cincinnati, on Friday, ruled that the State of Kentucky must pay almost $225,000 in legal fees that same-sex couples incurred because of their lawsuit against Davis. With this decision, 6th Circuit Court of Appeals was upholding a previous ruling by a federal district judge that ordered the State of Kentucky to pay that amount.

In its ruling on Friday, the 6th Circuit Court of Appeals wrote, “Because Davis acted on Kentucky’s behalf when issuing and refusing to issue marriage licenses, the district court correctly imposed liability for the award on the commonwealth.”

It continued: “The district court ruled that Davis, as an official, acted on Kentucky’s behalf, meaning sovereign immunity protected her. Plaintiffs dispute that ruling. The court also ruled that plaintiffs pleaded a plausible case that Davis, as an individual, violated their right to marry and that the right was clearly established, meaning qualified immunity didn’t protect her. Davis disputes that ruling. We agree with the district court on both issues and therefore, affirm.”

The U.S. Supreme Court reached its 5-4 decision in Obergefell v. Hodges in June 2015, recognizing same-sex marriage as a constitutional right. The four right-wing dissenters in that case were Justice Clarence Thomas, Justice Samuel Alito, Chief Justice John Roberts and the late Antonin Scalia — all appointed by Republican presidents. But the person who authored the decision for the majority in that case was not someone on the left wing of the Court, but rather, libertarian Justice Anthony Kennedy — a right-of-center Ronald Reagan appointee who tended to be fiscally conservative but liberal on social issues. Kennedy retired from the High Court in 2018 and was replaced by President Donald Trump’s nominee, Justice Brett Kavanaugh.

The 6th Circuit Court of Appeals, in its decision on Friday, noted that because of the Supreme Court’s landmark ruling in Obergefell v. Hodges, same-sex marriage became the law of the land in the United States. But because “same-sex marriage offended her religious beliefs,” the 6th Circuit wrote, “Davis took matters into her own hands. One day after the Supreme Court released Obergefell, Davis stopped issuing marriage licenses. She didn’t discriminate against same-sex couples, though; she stopped issuing licenses altogether. That meant that when plaintiffs — two same-sex couples who lived in Rowan County — sought marriage licenses from the Clerk’s Office, they couldn’t get them.”

In an opinion concurring with the majority of the court's conclusions, Judge John Bush found that "Davis knew or ought to have known, to a legal certainty, that she could not refuse to issue marriage licenses, as was her duty under state law, because of moral disapproval of homosexuality. And if Davis truly believed that she had a right under [Kentuck law] to not issue marriage licenses, she should have sought and obtained judicial confirmation of her claim. That, she did not do."