WATCH: Trump bumbles through meeting with refugees and humiliates himself with uncomfortable questions 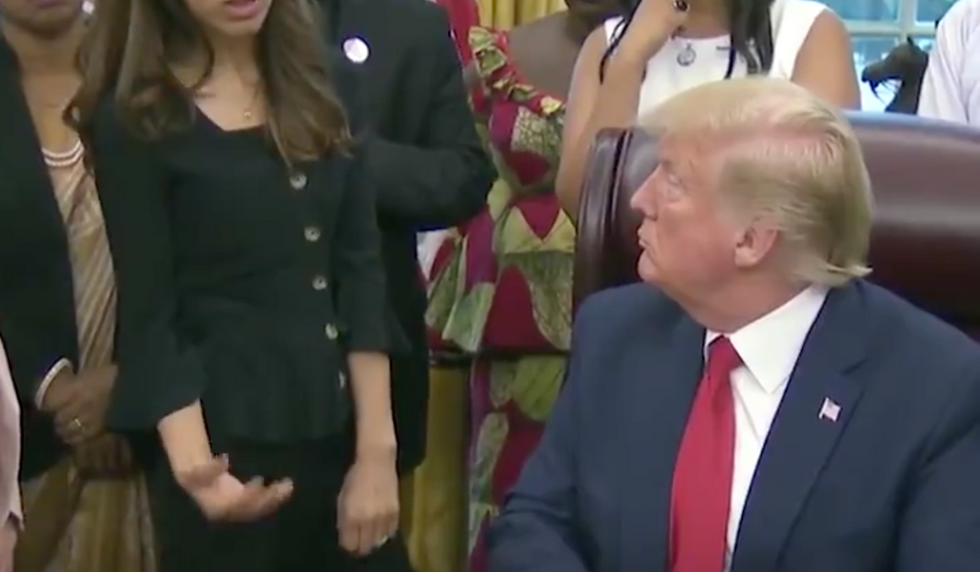 Amid outrage this week over President Donald Trump's racist rhetoric and policies regarding asylum seekers and immigrants, critics expressed shock on Friday over two viral videos of the president meeting with several refugees from all over the world in the Oval Office.

One observer on social media accused Trump of displaying a "sociopathic inability to empathize" while another said "he couldn't even manage to have a coherent three-minute conversation" with a Nobel laureate.

“You had the Nobel Prize?” Donald Trump learns of Yazidi activist Nadia Murad. Here’s how the interaction unfolded https://t.co/DE3exTAm7N
— The National (@The National)1563465313.0

This video raises the question of whether @realDonaldTrump even knows where #Myanmar is? When told about the… https://t.co/93Nar8liqb
— Phil Robertson (@Phil Robertson)1563456951.0

Trump appeared unaware of the plights of refugees like Nobel Peace Prize winner Nadia Murad, who has campaigned for human rights following her escape from ISIS captivity in Iraq, and Mohib Ullah, one of hundreds of thousands of Rohingya Muslims who were forced to leave Myanmar.

Murad explained how she and thousands of other women were abducted by ISIS when the group took control of parts of Iraq in 2014. The president has spoken frequently about his alleged defeat of ISIS in Iraq, but as Murad explained, "it's not about ISIS" any longer.

"I hope you can call or anything to the Iraqi and Kurdistan [governments]," she added, telling Trump that French President Emmanuel Macron has been vocal in his support for the Yazidis and their desire to return home.

Murad also spoke about what drove tens of thousands of Yazidis to seek asylum in Germany, as thousands of refugees are currently hoping to be welcomed into the United States while the Trump administration moves to eliminate asylum rights and considers cutting the number of refugee admissions to zero next year.

"After 2014 about 95,000 Yazidis, they immigrated to Germany through a very dangerous way," Murad said. "Not because they want to be refugees, but we cannot find a safe place to live. All this happened to me. They killed my mum, they killed my six brothers."

On social media, critics expressed shock at Trump's apparent lack of knowledge and interest in the experiences of refugees around the world, even as he enacts xenophobic policies to keep them out of the United States.

Donald Trump says that he cares about combating sex trafficking, but he couldn't even manage to have a coherent thr… https://t.co/7VOZChVPzQ
— Simon Hedlin (@Simon Hedlin)1563547173.0

Some noted that Trump appeared engaged in his conversation with Murad mostly when he inquired about her Nobel Peace Prize, an award that Trump has said he hopes to win and which Murad was awarded for her work combating sexual violence around the world.

Nadia Murad tells the president of the United States her heartbreaking story of having to survive genocide and mass… https://t.co/O46XUMJjd6
— Mehdi Hasan (@Mehdi Hasan)1563513855.0

Nadia Murad won the Nobel Prize for her horrific struggle with ISIS-the same ISIS Trump uses to scare his base. His… https://t.co/3vnwPvx2tb
— Amee Vanderpool (@Amee Vanderpool)1563541411.0

After speaking with Murad, Trump turned to Ullah, a member of the Rohingya religious group which was subjected to genocide in Myanmar in recent years. Ullah asked how the U.S. will help the Rohingya return to the country.

"Good afternoon, Mr. President," said Ullah. "I am a Rohingya from Bangladesh refugee camp. So most of the Rohingya refugees are waiting to go back home as quickly as possible. So what is the plan to help us?"

After Trump asked Ullah what country he was from, Ambassador for Religious Freedom Sam Brownback quickly explained that the Rohingya have been expelled from Myanmar, but the president offered no answer to Ullah's question.

It’s possible that #trump’s ignorance about the plight of #Rohingya - even where they are from - will play into han… https://t.co/W4Y5weqdcK
— Michael Vatikiotis (@Michael Vatikiotis)1563499232.0