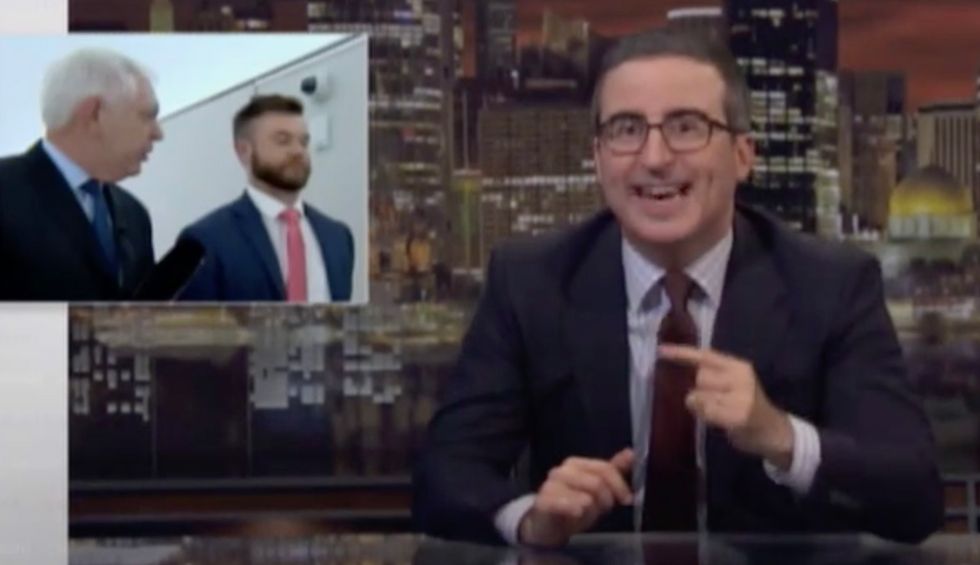 The Republican House Speaker scandal in Tennessee has been making news for several weeks as disgusting text messages and social media exposed a staffer and his boss.

The story began when an activist was arrested for violating an order of no communication to the Speaker. It turned out that the Speaker’s chief of staff fraudulently doctored the communication. It was at that moment the house of cards came tumbling down.

Speaker Glen Casada exchanged a series of racist text messages with staffer Cade Cothren and then tried to claim that he had obviously been “framed by liberals.” It was something HBO host John Oliver called unbelievable.

“And yet, if you can believe it, which you definitely can, that defense quickly fell apart,” Oliver said Sunday during his special report on Tennessee.

Oliver ran a video of a local news report showing that Cothren had taken a selfie at 2:15 a.m. talking about how stoned he was.

“Tripping balls out of my mind at 2:15,” said Cothren. “Craziest experience of my entire life. Acid, cocaine, weed.”

During a trip to the Dominican Republican, Cothren also texted that he “just did a gram of cocaine in my office.” The local news report noted that it was sent at 10:38 a.m. “on a work day.”

“OK, OK, OK, the emphasis on what time of day these occurred is a bit weird there,” Oliver said. “It seems to suggest that the main issue here was scheduling. Would noon have been a more appropriate time to blow a ‘g’ of ‘yayo’ off of tax-payer funded furniture? If Cothren had waited until the dead of night and snuck back into the empty office building and then took a ski trip to Mt. Booger-Sugar, that would have been better, would it?”

That isn’t the worst part, however. The scandal takes a disgusting turn when a $180 bar bill for a chicken restaurant named “Party Foul” was charged on the campaign’s PAC account. According to the local report, Cothren texted his family values-focused boss to boast that he had just had sex with a woman in the bathroom.

“The only thing on earth more shatteringly distasteful than attempting to impress a state Representative by bragging about being a sexual disappointment in a bathroom at a Tennessee chicken restaurant, that serves a 55-ounce Bloody Mary, topped with two whole fried Cornish game hens, two whole Scotch eggs, eight fried okra, and a whole avocado, is by attempting to impress a state Representative by lying in a toilet text about all of the lighting-fast orgasms he’s been doing in said bathroom at Tennessee chicken restaurants,” Oliver continued.

Then the host read through a series of Yelp reviews of the Party Foul restaurant, complaining about how slippery the bathroom floors are and that there is no soap, paper towels or toilet paper.

Oliver noted that the floor being slippery makes sense because “that floor is probably filthy with chicken grease, Cade Cothren’s rapidly expelled ejaculate, and/or the flop-sweaty development from trying to seem like Mr. Cool-sex in front of Tennessee state Rep. Glen Casada.”

Casada is set to step down this week.