Jake Tapper laughs in Pence's face: 'We don't have the cleanest air and water in the world' 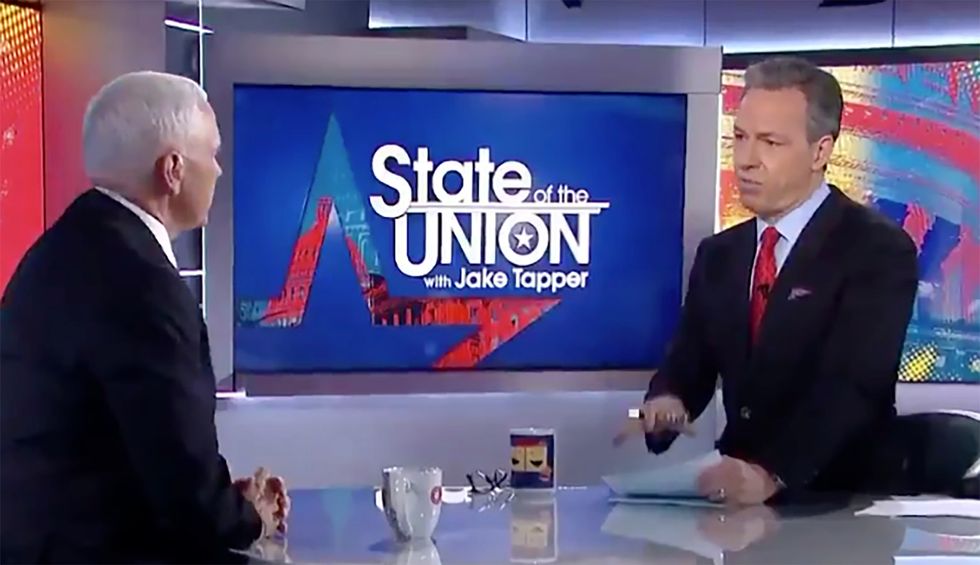 On CNN this morning, Mike Pence tried to summon as much gravitas as he could — veering dangerously close to the event horizon of fatally constipated — in order to sell a few of those common-sense homespun lies that play so well in the heartland.

He sounded like an ass — but, significantly, not a braying ass like his Sith Lord. He simply sounded like a “Christian” greasing the skids for the destruction of God’s creation.

In the wake of the Trump administration’s rollback last week of President Obama’s Clean Power Plan, Jake Tapper asked Pence if he thinks climate change is a threat to our country.

Pence danced around the question like Ricky Martin at a gay conversion camp:

TAPPER: Do you think human-induced climate emergency is a threat to the United States?

PENCE: Well, what I will tell you is that we’ll always follow the science on that in this administration …

PENCE: But what we won’t do — and the Clean Power Plan was all about that — was hamstringing energy in this country, raising the cost of utility rates for working families across this country …

TAPPER: But is it a threat?

PENCE: … while other nations like China and India do absolutely nothing or make illusory promises decades down the road to deal with it. You know, the truth of the matter is that with the advent of natural gas, with the natural gas explosion that’s developing with clean coal technology, we’re seeing a significant reduction of carbon emissions all across this country.

PENCE: I think the answer to that is going to be based upon the science.

TAPPER: But the science says yes; I’m asking you what you think.

PENCE: Well, there’s many in the science …

TAPPER: The science community in your own administration — at NOAA, at the DNI — they all say it’s a threat. But you won’t, for some reason.

PENCE: What we’ve said is we’re not going to raise utility rates. Remember what President Obama said, he said he had his climate change plan, he said it’s necessarily going to cause utility rates to skyrocket and that would force us into these green technologies. Now you’ve got Democrats all running for president that are running on a Green New Deal that would break this economy …

PENCE: I think we’re making great progress reducing carbon emissions. America has the cleanest air and water in the world. We’ll continue to use market forces ...

For the record, Pence is wrong about our country having the cleanest air and water in the world. I know you're all shocked.

Hey, I’d like to laugh in Pence’s face, too. Wouldn't we all? But climate change is serious, and this administration is not taking it seriously.

Needless to say, our planet can’t afford much more of this willful ignorance.