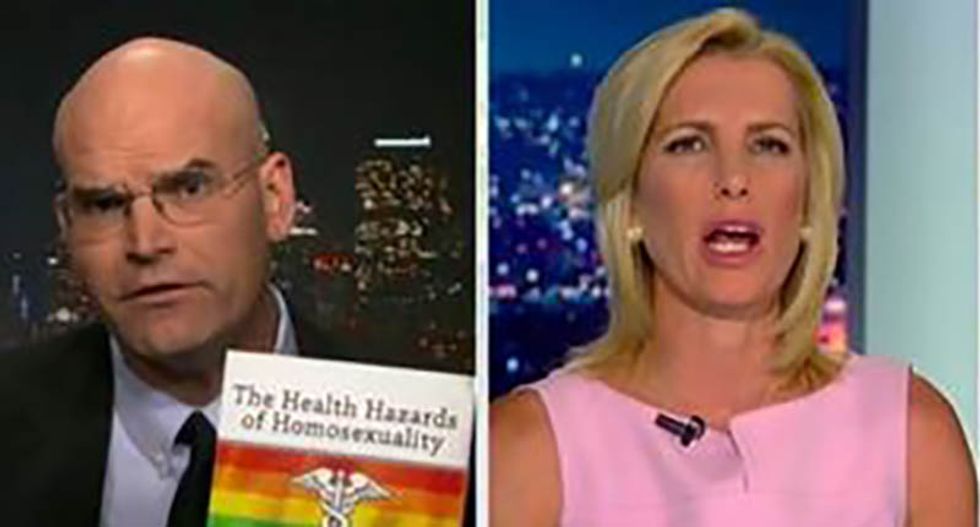 Drag Queen story hours are "popping up all over the country," Fox News host Laura Ingraham warned viewers Thursday night. To "debate" the issue Ingraham invited the head of the California chapter of an anti-gay hate group to discuss the issue of national importance: drag queens reading children's story books to kids at local libraries.

"The bottom line is this: you have adult homosexual men, adult entertainers, going in to a public library, reading to children," MassResistance of California head Arthur Schaper told "Ingraham Angle" viewers. "I mean, that alone should not only be setting off alarms but people should be demanding this to be canceled even before it starts."

Ingraham, who has a long history of attack the LGBT community, tried to reel her guest in, but Schaper continued.

Ingraham, who balked at Shaper's questions, went on to say that drag queen story hours are an organized "attempt to advance a particular agenda."

At the end of the six-minute segment Schaper held up and tried to advertise a book titled, "The Health Hazards of Homosexuality," which is authored by MassResistance.

Ingraham chastised Schaper – not for the incendiary book but for holding up props.

She told the audience that "people have legitimate concerns" about drag queens reading books to kids and she's just "trying to figure out what's really going on."

"What is the point of doing this with kids?" Ingraham asked, as if some how drag queens are dangerous.

Some took to social media to denounce Ingraham's and Schaper's attempt to attack LGBT people and drag queens, especially during Pride month.

@IngrahamAngle Arthur Schaper went on TV tonight to spread FEAR. He may well know people have no choice over being… https://t.co/hywoGlp1j7
— Zack Ford (@Zack Ford)1560482266.0

Dear Democrats: please, stop going on Fox News only so that network executives can turn around and use your appeara… https://t.co/HDnJgrqeVc
— Matt McDermott (@Matt McDermott)1560482153.0