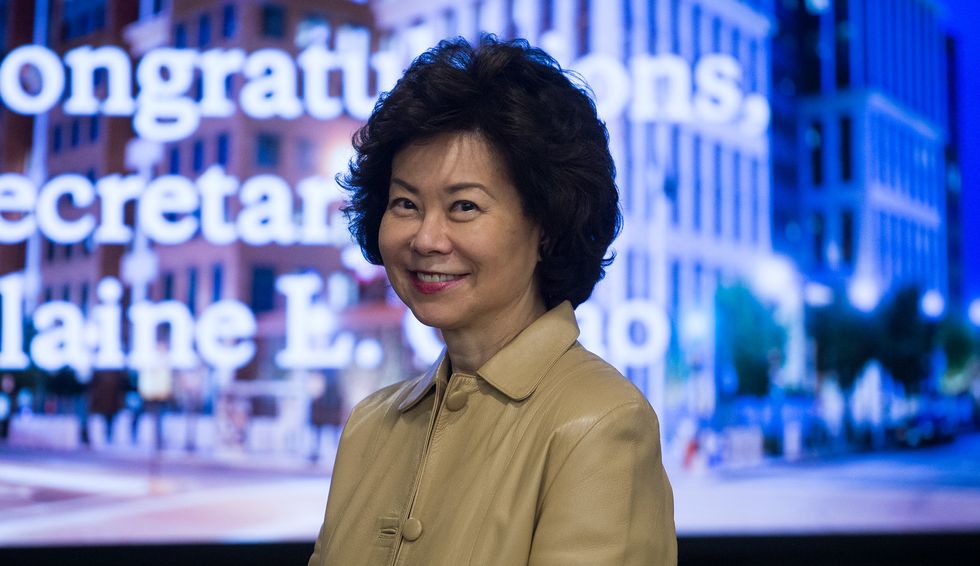 Officials in the U.S. Department of Transportation (DOT) spent months planning for Secretary of Transportation Elaine Chao's visit to China, but after all that planning and preparation, the trip was canceled. And the New York Times’ Eric Lipton is reporting that the State Department “raised ethics concerns” in response to some of Chao’s actions when the trip was being planned.

In a Twitter thread, Lipton notes that the ethics concerns came about because in China, Chao’s “family was in the shipping business.” Chao, who is married to Senate Majority Leader Mitch McConnell, “took a particular interest in picking out gifts for officials she would meet in China,” Lipton tweets.

Lipton, in the thread, posts an August 27, 2017 e-mail from Chao in which she discusses possible gifts for Chinese officials. Chao, in the e-mail, writes, “When I was secretary of labor, I had a number of White House logo souvenirs like: candy bars, leather portfolios, etc. .... Can you find out how to get these White House gifts for us to bring as gifts to VIPs in China? Get a list, prices/items, etc. They will NOT be given out like water or candy…. but to special people.”

But then the State Department raised ethics concerns. Asking why Elaine Chao's family was going to be a part of thi… https://t.co/7LRpV8WEwv
— Eric Lipton (@Eric Lipton)1559560543.0

The agency also put a chunk of work in to prepare special luggage tags for the folks going on this trip, or at leas… https://t.co/KNI0QuIGOq
— Eric Lipton (@Eric Lipton)1559559905.0

Lipton, in his thread, reports that the DOT “went to great lengths” to “hide any evidence from THE NYT that Chao’s staff was communicating with FOREMOST (the family shipping company that does business in China) while they worked to prepare for this trip. Everything is redacted. Well, almost everything.”

Lipton also explains that after ethics questions were raised by the State Department, the trip was canceled “within a matter of days.”