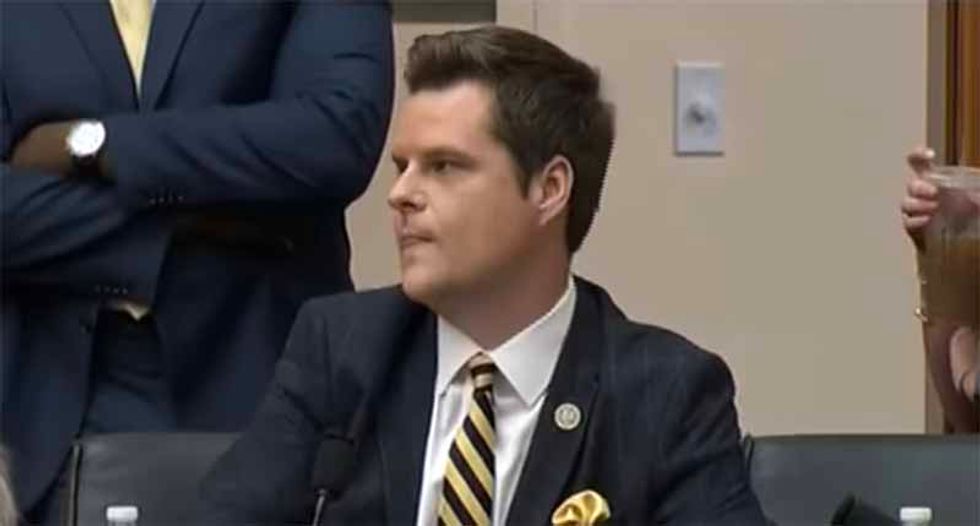 Rep. Matt Gaetz (R-FL) got cut off at the end of a brief House Judiciary Committee the attorney general refused to attend.

Attorney General William Barr notified the Democratic-led panel that he would not attend the hearing because lawmakers intended to have committee lawyers question him, rather than individual lawmakers.

The Republican minority complained bitterly during the brief hearing, which featured an empty chair in place of the attorney general, saying they were deprived from hearing Barr’s testimony due to demands they insisted were unreasonable.

Committee Chairman Jerry Nadler (D-NY), however, disagreed and said the panel had constitutional authority to conduct oversight of an executive branch that refuses to comply with lawful requests.

“We will make sure that no president becomes a monarch,” Nadler said, bringing the hearing to a close. “We need the information without delay. The hearing is adjourned.”

Gaetz, one of President Donald Trump’s staunchest defenders, tried to comment before Nadler gaveled the hearing to an end.

Rep. Doug Collins (R-GA), who had complained at length about the Democratic conditions set for Barr’s testimony, groused again.

“And we’ll do so trampling minority rights,” Collins said.

“If it’s going to be, Mr. Chairman,” Gaetz said, “that there is not going to be a recognition of members who seek legitimate inquiry as to the procedures –“

That’s when the microphones, which are controlled by the committee’s leadership, were shut off.