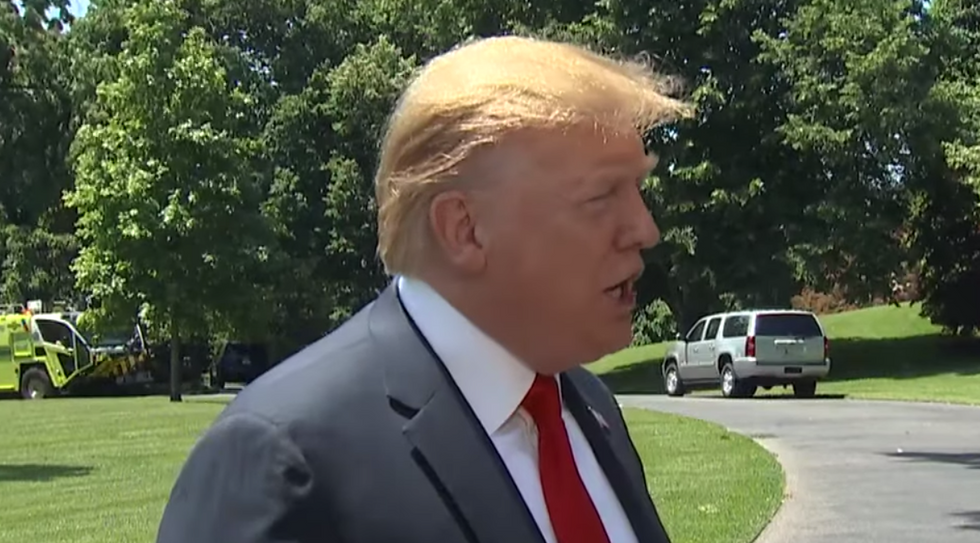 President Donald Trump on Friday delivered an angry rant to reporters on the White House South Lawn in which he once again attacked his political foes while also spouting fact-free conspiracy theories about the investigation into Russian interference in the 2016 presidential election.

Even though the president was about to depart for an overseas trip to Japan, he could not resist making more unhinged attacks against his perceived enemies ranging from House Speaker Nancy Pelosi (D-CA) to the news media to law enforcement agencies.

1.) Trump calls special counsel Robert Mueller’s Russia investigation an “attempted coup.” Even though the president at one point claimed that Mueller had exonerated him, on Friday he was back to claiming the entire investigation was illegitimate.

“It was an attempted coup or an attempted takedown of the president of the United States!” he said. “It should never, ever happen to anybody else!”

2.) Trump complains that the war criminals he’s considering pardoning have been poorly treated. Although the president didn’t firmly to commit to plans to pardon U.S. military service members who have been either accused of or convicted of committing war crimes, he did express sympathy for them.

“Some of these soldiers are people who have fought hard, long,” Trump said. “We teach them to be great fighters and sometimes when they fight, you know, they get treated very unfairly.”

3.) Trump melts down at Nancy Pelosi… again. The president bristled at the suggestion that it was wrong for him to post a deceptively edited video that made Pelosi appear to be stumbling through a speech.

“Did you hear what she said about me long before I went after her?” Trump complained. “She made horrible statements, she knows they’re not true, she said terrible things! So I just responded in kind!”

4.) Trump falsely claims that his poll numbers are “very good” and complains they’d be vastly higher without negative media coverage.

When asked about his reelection chances, Trump tried to claim that his current poll numbers are “very good,” when in reality his average approval rating at the Real Clear Politics average of polls is just 43 percent, while his disapproval rating is stuck at 54 percent.

He then turned his ire toward the news media.

5.) Trump seethes at the idea that anyone is questioning Attorney General Bill Barr’s credibility. When asked by a reporter how anyone could be confident in his attorney general performing a fair investigation of the origins of the Russia probe, Trump grew visibly angry.

“The question is so false and so phony!” Trump shouted. “The attorney general is one of the most respected people in this country and he has been for a long time!”