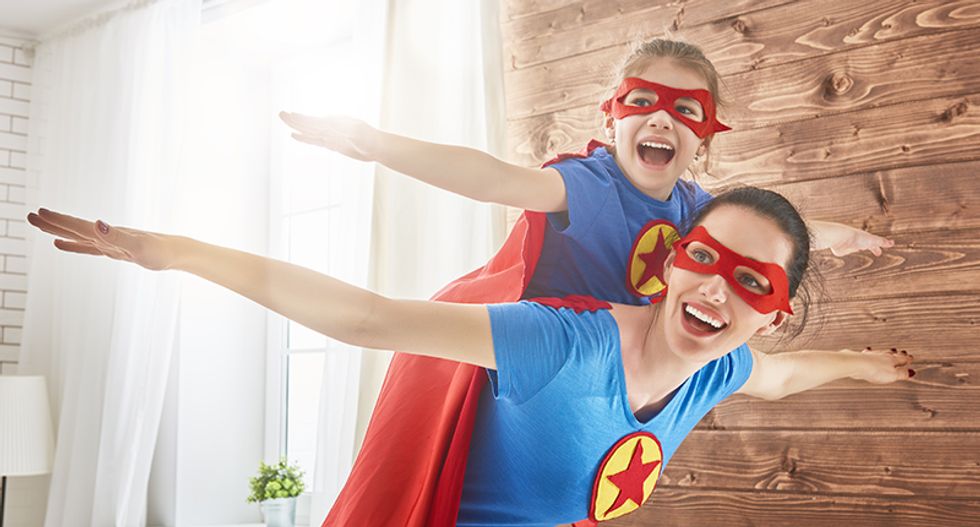 Image via Shutterstock.
The Conversation
May 12, 2019Science

Each May, the United States celebrates Mother’s Day, and for good reason. According to surveys I’ve conducted, over 25% of Americans cite their mother as their number one hero. Fathers come in a distant second at 16%.

Moms are indeed the mother of all heroes.

More than 60 years ago, psychologist Abraham Maslow proposed his famous hierarchy of human needs, spanning the most basic biological needs to the pinnacle of realizing one’s full potential. Mothers are masters at helping their children meet this full range of human needs: from providing physical nourishment and safety, love and affection, all the way up to supporting emotional and spiritual growth.

Survey respondents report their mothers as heroic in helping them progress through the various stages of Maslow’s model – even if they don’t call it that. A good mother feeds you, protects you, loves you, helps you connect with others and encourages you to become your best self. She’s fulfilling what psychologists including mehave identified as the four important functions of a hero: provide defense and protection; embody intelligence and wisdom; model moral behavior; and promote enhancement and inspiration.

Here’s how moms do it.

Amazing stories abound of mothers doing whatever it takes to save their children, whether lifting astronomical weights or sacrificing their own lives. It is commonplace to see headlines about mothers saving and protecting their children in the most harrowing of circumstances.

The protection function of heroes is seen in the comments of survey respondents about why their mothers are their heroes. Typical responses include, “My mother protected me from neighborhood bullies” and “My mother kept me safe from predators.” In her review of the psychological mechanisms of motherhood, Rebecca M. Fischer, a student researcher here at the University of Richmond, found that mothers are “biologically driven to protect, care for and motivate their children to succeed.”

Other colleagues of mine at Richmond, neuroscientists Craig H. Kinsley and Kelly G. Lambert, have discovered that motherhood changes the brain in female rats, producing maternal behaviors directed toward protecting their young from danger. In human beings, too, women’s brains undergo significant remodeling that lasts more than two years after birth. These changes help women with the transition into motherhood and may include a readiness to protect and defend the baby.

Human infants are among the most vulnerable of all primates. No wonder our species evolved to have mothers who risk it all to protect us when we are so small and fragile.

Scientists are beginning to uncover evidence suggesting that intelligence is inherited more from mothers than from fathers.

Beyond this genetic inheritance, mothers tend to be committed to passing on wisdom to their children. My own mother taught me that the most important things in life are intangible and cannot be bought – love, integrity, character and honesty.

Many of Americans’ most cherished heroes credit their mothers for teaching them fundamental truths about life. George Washington apocryphally observed that “all I am I owe to my mother. I attribute all my success in life to the moral, intellectual and physical education I received from her.” Famed musician Stevie Wonder has reportedly called his mother his “greatest teacher.”

Legendary tales of heroism almost always include mentors who possess enduring wisdom and are willing to share it. Mothers serve as mentors to their sons and daughters when they need guidance while growing up.

A good mother tries to provide an example of high standards of human conduct.

In his 2016 Presidential Proclamation of Mother’s Day, Barack Obama emphasized how mothers “shape America’s character.” He noted how many mothers “struggle to raise children while pursuing their careers or as single parents working to provide for their families” and how mothers lead “by powerful example and overcoming obstacles so their sons and daughters can reach their fullest potential.”

As children, many people watch their mothers’ selflessness and daily sacrifices, and learn that we’re all called to perform these acts of kindness for others. Heroes are beacons of hope who demonstrate how to behave virtuously. Sounds like a lot of moms.

The respondents to my colleagues’ and my hero surveys never fail to mention how their mothers made them better people. Typical responses include, “My mother inspired me to become my best self” and “My mother motivated me to develop my fullest potential.”

A good mother thinks the world of her children and wants what’s best for them. She encourages her kids to reach for the stars and maximize their fullest potential. As Facebook executive Sheryl Sandberg has said, her mother “raised me and my sister to believe that we could do anything, and we believed her.”

My own research on heroism indicates that hero stories throughout the ages were designed to energize and motivate their audience to become better people – an important part of the job description for moms, too.

Despite any flaws, moms come out on top

Do women instantly become saints when they have a child? Of course not. Certainly there are plenty of mothers out there who don’t fit these somewhat idealized descriptions.

But of all the people to pick from as heroes – presidents, humanitarians, legends, coaches and family members – our survey respondents listed mothers as their number one hero. Mothers, we learned, meet people’s needs and mold them into their best selves more effectively than any other individual the respondents encountered.

Mother’s Day far exceeds Father’s Day in terms of greeting card sales and gift expenditures, and for good reason. Mothers come out on top in our poll of heroes because of the free offering of love that they provide. Good moms are there for you when you need emotional support. They hug you. They comfort you when you cry and let you sit on their laps. They kiss you on your cheeks before school and at bedtime at night.

Yes, social norms are changing and fathers are taking on the role of nurturers more than in previous generations. But the emerging psychological science of heroism helps explain why many people reserve a special place in their hearts for their heroic mothers.