Stunning: A quarter of the West Antarctic ice sheet is now in a state of rapid 'dynamical imbalance' 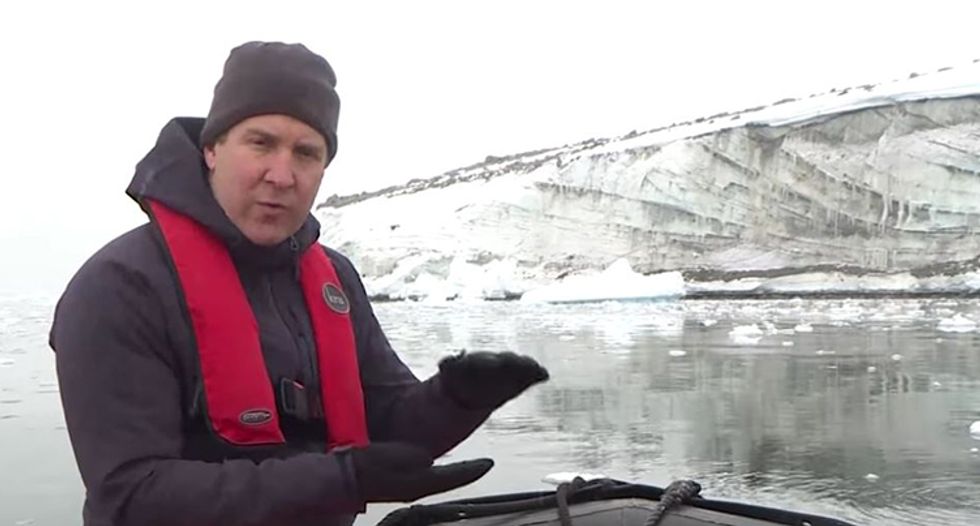 “We can see clearly now that a wave of thinning has spread rapidly across some of Antarctica’s most vulnerable glaciers, and their losses are driving up sea levels around the planet.” Andrew Shepherd, Lead author, and CPOM Director Professor

Troubling news out of Antarctica, again.

Researchers have found that nearly a quarter of the West Antarctic ice sheet is now unstable. This includes some of the largest and most vulnerable ice streams such as Thwaites and Pine Island glaciers.

From the University of Leeds:

A team of researchers, led by Professor Andy Shepherd from School of Earth and Environment at the University of Leeds, found that Antarctica's ice sheet has thinned by up to 122 metres in places, with the most rapid changes occurring in West Antarctica where ocean melting has triggered glacier imbalance.

This means that the affected glaciers are unstable as they are losing more mass through melting and iceberg calving than they are gaining through snowfall.

The team found that the pattern of glacier thinning has not been static.

Since 1992, the thinning has spread across 24% of West Antarctica and over the majority of its largest ice streams - the Pine Island and Thwaites Glaciers - which are now losing ice five times faster than they were at the start of the survey.

They found that fluctuations in snowfall tend to drive small changes in height over large areas for a few years at a time, but the most pronounced changes in ice thickness are signals of glacier imbalance that have persisted for decades.

From the study abstract with key findings. Trends in Antarctic Ice Sheet Elevation and Mass

Fluctuations in Antarctic Ice Sheet elevation and mass occur over a variety of timescales, owing to changes in snowfall and ice flow. Here, we disentangle these signals by combining 25 years of satellite radar altimeter observations and a regional climate model. From these measurements, patterns of change that are strongly associated with glaciological events emerge. While the majority of the ice sheet has remained stable, 24% of West Antarctica is now in a state of dynamical imbalance. Thinning of the Pine Island and Thwaites glacier basins reaches 122 m in places, and their rates of ice loss are now five times greater than at the start of our survey. By partitioning elevation changes into areas of snow and ice variability, we estimate that East and West Antarctica have contributed ‐1.1±0.4 and +5.7±0.8 mm to global sea level between 1992 and 2017.

Marine microorganisms in the Southern Ocean may find themselves in a deadly vise grip by century’s end as ocean acidification creates a shallower horizon for life, new CU Boulder research finds.

The modeling study, published today in the journal Nature Climate Change, forecasts that at current carbon dioxide emission rates, the depth at which some shelled organisms can survive will shrink from an average of 1,000 meters today to just 83 meters by the year 2100, a drastic reduction in viable habitat.

The steep drop, which could happen suddenly over a period as short as one year in localized areas, could impact marine food webs significantly and lead to cascading changes across ocean ecosystems, including disruptions of vital global fisheries.

The absorption alters the water’s chemistry, lowering its pH and reducing the amount of available carbonate, which microorganisms like corals and pteropods use to construct their calcium carbonate shells.

Crevasses are fractures in a glacier caused by the stresses of movement. They are like the cracks in the surface of clay as one pulls it apart past the limits of elasticity. They most often occur where the flow of a glacier increases, like in a steep deepening valley, and are thus oriented perpendicular to direction of flow. Crevasses that lie in a cross direction are called ‘transverse crevasses.’ There are also longitudinal crevasses that form parallel to ice flow and at an angle to the valley walls. These form as the glacier widens and the ice is pulled apart. These cracks in the surface of the ice shelf are an easily identifiable marker of areas of high stress within the ice flow. Mapping where crevasses appear is equivalent to mapping where the ice tensional stresses are highest.

On an otherwise featureless ice shelf, crevasses show where the different ice flows merge as they flow towards the open sea. Fahnestock et al. (2000) mapped crevasses, rifts, and glacial stretch marks they call “flow lines” on the Ross Ice Shelf in order to study the flow of ice from different glacial source areas to the Ross Sea and how these patterns may have changed in the past thousand years. From their study of the surface features, they were able to draw lines across the Ross Ice Shelf and identify whether a region of ice shelf was flowing in over the Trans-Antarctic Mountains from East Antarctica, or from the rapidly flowing ice streams from West Antarctica, named from southwest to northeast Ice Streams A, B, C, D, and E. A piece of ice takes about one thousand years to travel from the back of the Ross Ice Shelf to the front, and from its surrounding area we can tell where the piece of ice originated.

A Polynya is an open area of the ocean surrounded by sea ice.

Intense cyclones occurring over the ice pack, far south from the ice edge, were at the origin of the reoccurrence of the Maud Rise Polynya in the Weddell Sea.

The Maud-Rise Polynya was spotted in mid September 2017 in the center of an ice pack in Antarctica’s Lazarev Sea, causing researchers to question how this phenomenon occurred during Antarctica’s coldest, winter months when ice is at its thickest. Due to its difficult to access location, NYUAD scientists used a combination of satellite observations and reanalysis data to discover that cyclones (as intense as category 11 in the Beaufort Scale) and the strong winds that they carry over the ice pack cause ice to shift in opposite directions, which leads to the opening of the Polynya.

At the time of the discovery, the Maud-Rise Polynya was approximately 9,500 square kilometers large (equivalent to the landmass of the state of Connecticut), and grew by over 740 percent to 800,000 square kilometers within a month. Eventually, the Polynya merged with the open ocean once the ice started to retreat at the beginning of the austral summer months. Prior to 2017, this phenomenon has only been known to have occurred in the 1970s when satellite observations started to become more commonly used, and has baffled scientists ever since.

“Once opened, the Polynya works like a window through the sea-ice, transferring huge amounts of energy during winter between the ocean and the atmosphere.” said Francis. “Because of their large size, mid-sea Polynyas are capable of impacting the climate regionally and globally as they modify the oceanic circulation. It is important for us to identify the triggers for their occurrence to improve their representation in the models and their effects on climate.

“Given the link between Polynya and cyclones we demonstrated in this study, it is speculated that Polynya events may become more frequent under warmer climate because these areas will be more exposed to more intense cyclones. Previous studies have shown that under warmer climate, polar cyclone activity will intensify and extratropical cyclones track will move toward Antarctica which could decrease the sea-ice extent and make Polynya areas, closer to the cyclones formation zone,” she added.