Rep. Dan Crenshaw gets cornered on The View for offering 'ridiculous' excuse on Trump’s Charlottesville response: 'Why do you apologize for him?' 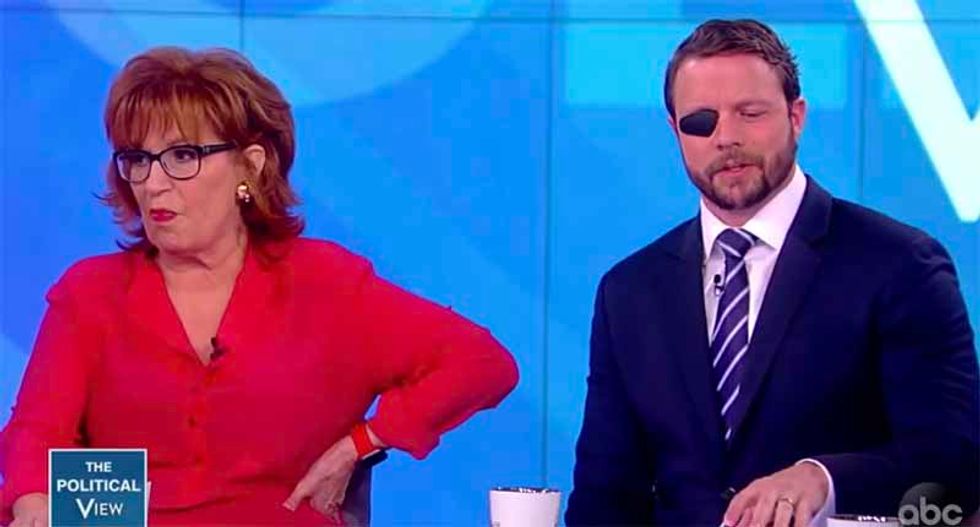 Image via Screengrab.
Travis Gettys
and
Raw Story
May 06, 2019

Rep. Dan Crenshaw (R-TX) appeared on “The View,” where he battled co-hosts Joy Behar and Sunny Hostin over remarks made by one of his fellow freshman lawmakers.

The Texas Republican and the show’s conservative co-host Meghan McCain have been hitting Rep. Ilhan Omar (D-MN) for months, accusing her of anti-Semitism and insensitivity toward 9/11 victims, and Crenshaw said Democrats have not condemned her forcefully enough.

“Unfortunately, we’re playing a team sport these days,” Crenshaw said. “We just had a long discussion about how Republicans feel about Trump, and I think you’re seeing the same issues play out on the democrats’ side with somebody on their own team, and they’re not sure how to handle it, even though they might behind closed doors disagree with what she’s saying.”

Behar pointed out that Omar was a recently elected congresswoman, and not halfway through a presidential term like Trump.

Crenshaw objected to her point, saying that Trump’s widely televised remarks did not represent what he believes.

“In that same sentence, when he said that, he also said, ‘I’m definitely not referring to white nationalists,” Crenshaw said.

“Why do you apologize for him?” she said. “It’s ridiculous.”

Crenshaw insisted the president’s remarks about “fine people on both sides” were a bit more nuanced than many recall.

“You have to listen to what he says,” the congressman said.

Trump did, in fact, offer support for marchers who were protesting the removal of Confederate monuments, while saying the neo-Nazis and the white nationalists who who organized the rally “should be condemned totally.”

But he also attacked “troublemakers” in the group of counterprotesters as “a lot of bad people.”

Crenshaw then got back to attacking Omar, who drew strong criticism for saying anti-Muslim sentiment had spiked after the Sept. 11, 2001, terrorist attacks.

“CAIR was founded after 9/11,” Omar said, “because they recognized that some people did something and that all of us were starting to lose access to our civil liberties.”

Hostin said the Minnesota Democrat’s comments have been taken out of context, but Crenshaw refused to extend the same courtesy to Omar.

“Unless you’re referring to a different event, and I don’t think she was, then it clearly was not taken out of context,” Crenshaw said. “I don’t think she’s apologized, either, she doubled down.”

Hostin reminded him that George W. Bush had used similar language to describe the attacks, and no one objected to his choice of words, and Crenshaw said there was no comparison.

“It was dismissive in tone, and in gesture, and in words,” he said.