Mayor Pete: We need to use 'crazy uncle management' against draft-dodger Trump 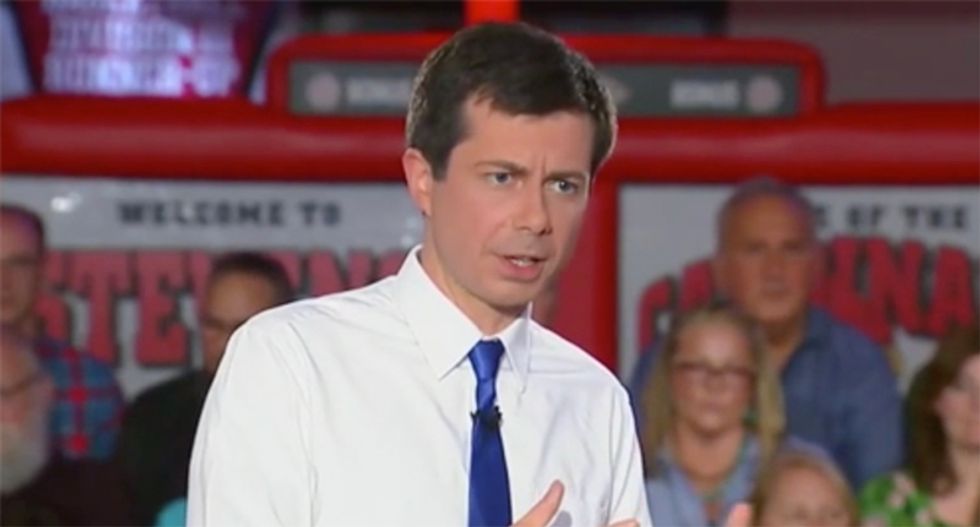 Pete Buttigieg is pretty much the polar opposite of Donald Trump.

He’s charming. He’s knowledgeable. He’s intelligent. He’s measured. He speaks in complete sentences. And there are no McNugget sauces gradually coagulating within the long-forgotten interstices of his lardy torso.

He also has a solid plan for approaching his debates with Trump, should he become the nominee.

In an interview today with The Washington Post’s Robert Costa, Buttigieg said he would use “crazy uncle management” to deal with Trump. (And all of us who’ve actually had crazy uncles know exactly what he means.)

ROBERT COSTA: [Trump] is going to be tough, he's going to take punches at you, rhetorically. Are you ready for that?

What we’ve got to learn is how to kind of stiff-arm him, so it’s almost like a sort of crazy uncle management.

I don’t have a problem standing up to somebody who was working on season 7 of Celebrity Apprentice while I was packing my bags for Afghanistan, but at the end of the day, it’s not about him.

COSTA: Do you think he should have served in Vietnam?

BUTTIGIEG: Well, I have a pretty dim view of his decision to use his privileged status to fake a disability in order to avoid serving in Vietnam.

COSTA: You believe he faked a disability?

BUTTIGIEG: Do you believe he has a disability? Yeah. At least not that one. … This is actually really important because I don't mean to trivialize disability. But I think that’s exactly what he did. When you think about the way somebody can exploit the system, and needless to say the way he has treated and mocked disabled people is just one more example of the many affronts to just basic decency that this president has inflicted on this country. But manipulating the ability to get a diagnosis. I mean, if he were a conscientious objector, I'd admire that. But this is somebody who, I think it’s fairly obvious to most of us, took advantage of the fact that he was the child of a multimillionaire in order to pretend to be disabled so that somebody could go to war in his place.

And here’s the clip. This guy gets more impressive by the day.

Not sure if Mayor Pete is in line to be the nominee, but he sure handles himself well in an interview. And I have no doubt he’d handle himself well against Trump one-on-one.

At the very least, I hope the other Dem candidates are taking notes.

Donald Trump hates you! Hate him back! Dear F*cking Lunatic: 101 Obscenely Rude Letters to Donald Trump and its breathlessly awaited sequel Dear F*cking Moron: 101 More Letters to Donald Trump (now out in paperback, too) by Aldous J. Pennyfarthing are available at Amazon! Reviewers have called these books “hysterically funny,” “cathartic,” and “laugh-out-loud” comic relief. And you can get them for less than the price of a cup of coffee ... or a black-market Xanax ... or five minutes of therapy. It’s time to heal, my friends. Buy now!