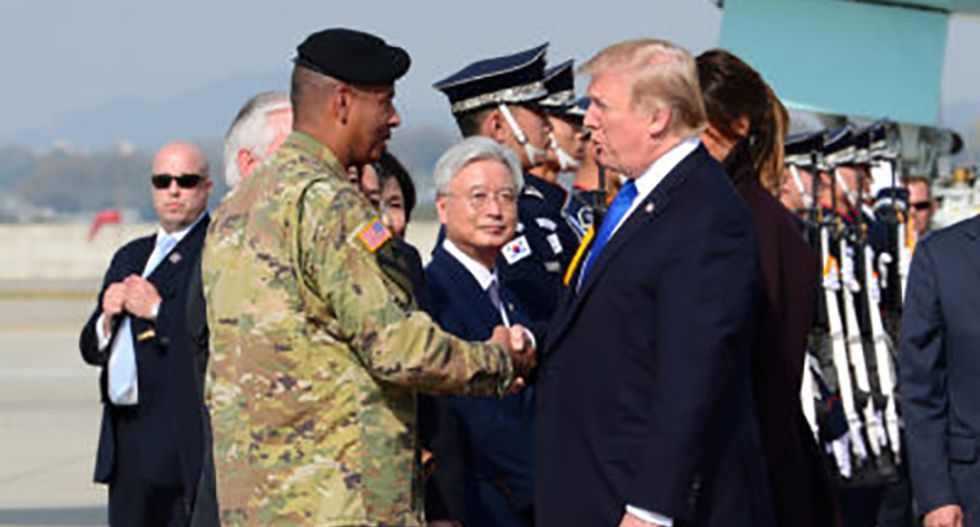 President Donald J. Trump greets U.S. Army General Vincent Brooks, United States Forces of Korea commander, after landing at Osan Air Base, Republic of Korea, Nov 7, as part of his 13-day trip through the Pacific Theater. President Trump traveled from Osan to Camp Humphreys to speak with service members. Afterward, he is expected to speak with key military leaders of the region on strengthening the international resolve to confront the North Korean threat and ensure the denuclearization of the Korean Peninsula. (U.S. Air Force photo by Staff Sgt. Alex Echols III/Released)
Alex Henderson
May 27, 2019 World

It has been widely reported that President Donald Trump is considering granting presidential pardons to some veterans who have been accused or convicted of war crimes. And Gabor Rona, international legal director at Human Rights First and a law professor at Columbia University in New York City, explains in a May 25 article for the Just Security website that pardoning suspected or convicted war criminals might be violating the rules of war.

Rona notes that in a public statement on May 24, the International Committee of the Red Cross (ICRC) “explains the distinction between pardons and amnesties.” And Rona stresses that while the ICRC doesn’t comment on specific cases, “the fact that the organization chose to weigh in on such a hot-button issue suggests how serious a threat such action by President Trump would be to the system of international law.”

One of the men Trump reportedly is considering a pardon for is Special Operations Chief Edward Gallagher, the Navy SEAL set to go to trial on charges that he shot several unwarned civilians and stabbed a prisoner of war to death in 2017 while on duty in Iraq. Another is Maj. Mathew L. Golsteyn, a U.S. Army Green Beret accused of killing an unarmed Afghan in 2010.

International law, Rona stresses, has very specific rules for war: “Combatants may target enemy combatants, but civilians and even combatants no longer participating in hostilities, such as POWs — not to mention the deceased — must be protected.”

The POW Gallagher is accused of stabbing to death was a member of the terrorist organization ISIS (Islamic State, Iraq and Syria), an avowed enemy of the United States and its allies. But the ISIS member, according to reports, was not killed in combat, or as an act of self-defense; rather, Gallagher is accused of stabbing him multiple times as an act of revenge and premeditated murder.

Rona says of Gallagher, Golsteyn and others, “Pardoning these men, especially the ones who have not yet been tried—amnesties—is an insult to the legal and moral standards the U.S. military is bound to uphold. It undermines the ability of the military to enforce discipline among its ranks and after the torture scandals of post-9/11, further damages the reputation of the United States for adherence to its international human rights obligations and the laws of war.”

Rona goes on to say that because Trump, as president, is commander-in-chief of the United States’ armed forces, he must act in compliance with the U.S. Law of War Manual.

“As the commander of these soldiers,” Rona writes, Trump “has a responsibility to punish, if not prevent, violations of the laws of war committed by his subordinates.”