How gullibility and cynicism explain Trump voters: The sycophants of a leader who fulfills their narcissistic fantasies will do anything to support him 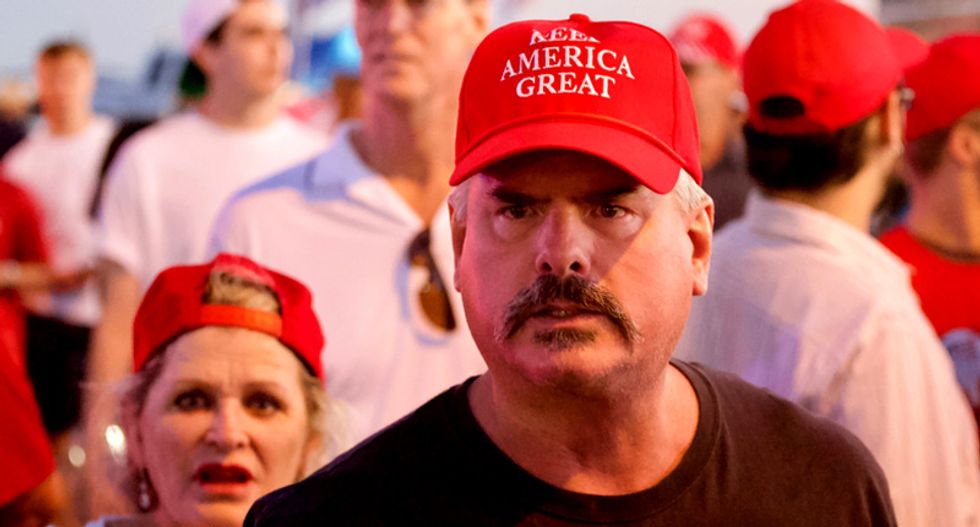 Trump supporters and protesters gather outside a campaign rally (and accompanying anti-Trump protest) for President Trump and US Senate candidate Martha McSally. (Eric Rosenwald / Shutterstock.com)
Paul Rosenberg
and
Salon
May 13, 2019

In Part 1, we looked at Trump’s lies through the lens of the Washington Post’s own “bottomless Pinocchio” lists as well as three academic studies based on their data, before turning to a broader perspective. That involves seeing Trump's lies as part of a larger rhetorical strategy, as described by Jennifer Mercieca, a historian of rhetoric, whose book, "Demagogue for President: The Rhetorical Genius of Donald Trump," [table of contents here] will be published next year.

The bottom line of Part 1 is that Trump’s lies can be understood as expressing his view of the world — how he would like things to be, for whatever purposes he may have, some quite enduring (as seen in his “bottomless Pinocchios”), others perhaps spur-of-the-moment. As Mercieca argued here, the Mueller report can be read as further confirmation of Trump’s authoritarian orientation in word and deed, in sharp contrast to the “total exoneration” he falsely claims it to be. This is entirely typical.  Demagogues and tyrants have always used lies this way. But they cannot and do not act in a vacuum. The broader context in which they operate is the focus of Part 2.

With his signature attacks on “political correctness,” Trump tries to claim the mantle of a truth-teller — though perhaps without being taken literally. But that’s a problematic claim, to put it mildly.

“In ancient Greece a ‘truth teller' was known as a parrhesiastes; such a person was a 'fearless' speaker, they spoke truth to power, endangering themselves,” Mercieca explained. “What they said was believed to be true because of the risk that they took when they said their unpopular truths. Trump doesn't speak truth to power, he doesn't risk his life with his unpopular truths. Trump isn't a truth teller in the classical sense.”

Nonetheless, “Trump's lies are popular with his base,” Mercieca acknowledged. She suggests this passage from Hannah Arendt's "Origins of Totalitarianism" can help:

A mixture of gullibility and cynicism had been an outstanding characteristic of mob mentality before it became an everyday phenomenon of the masses. In an ever-changing, incomprehensible world the masses had reached the point where they would, at the same time, believe everything and nothing, think that everything was possible and that nothing was true … Mass propaganda discovered that its audience was ready at all times to believe the worst, no matter how absurd, and did not particularly object to being deceived because it held every statement to be a lie anyhow.

“I think gullibility and cynicism are a good explanation for Trump voters,” Mercieca said. “They think everything is a lie anyway, so why not cheer for their guy who lies better than the rest of them?”

Three legs of tyranny and how they shape lies

But there’s another way of viewing the pathologies of tyranny, described by Elizabeth Mika, a contributor to "The Dangerous Case of Donald Trump,” which I reviewed here in October 2017. Her contribution, “Who Goes Trump? Tyranny as a Triumph of Narcissism,” was focused on how the threat of this demagogic malignant narcissist interacts with related narcissistic tendencies found among his supporters and society at large. Lies are omnipresent in the world she describes, but the tyrant's lies — expressing the world-as-he-wants-it and imposing it on everyone around him — can only succeed as part of a broader dynamic of mendacity.

"Tyrannies are three-legged beasts," Mika explained: There's the tyrant, his supporters and the society as a whole, and they are bound together in different ways, always with some profound need for deception. The nature of lies that a tyrant or would-be tyrant tells are reflections of all three, not just the tyrant alone. But the idea that Trump would become “normal” was never in the cards, as she reiterated when I reached out to her.

“The dismantling of American democracy under the leadership (if one can call it that) of Donald Trump is proceeding as predicted, so much so that there is not much to add beyond the somewhat bitter ‘We told you so,’” Mika said. “It is just that the punditocracy is perhaps finally catching up.”

The explosive increase in Trump’s lying noted by the Washington Post was no surprise to Mika. She pointed back to something she wrote just after Trump’s inauguration:

What we know about malignant narcissists is that they psychologically decompensate once they achieve the ultimate position of power. They worsen in every possible way: become more grandiose and paranoid, more aggressive and demanding, and progressively less in touch with reality (and Trump has never been fully in touch with it).

We can expect his narcissistic rage to intensify in proportion to his growing grandiosity and paranoia ….

There has never been a case of a malignant narcissist in power whose pathology improved, or even remained stable: they always deteriorate, and often rapidly, as they become drunk on (what they see as) now unlimited power and adulation.

“I wrote that in early 2017, and other pieces in a similar vein all throughout 2016. So none of it is surprising,” Mika told me. “What's fascinating, in a grim way — though also not surprising — is the blindness of our press, et al., to these developments,” which brings us back to the media’s inability to report what’s right in front of their eyes: an avalanche of  lies.

This isn’t on Trump. It’s rooted in our own elitist narcissism, Mika argues:

I came up with the term "narcissistic blindness" to capture this phenomenon rooted in a seeming conviction that It can't happen here because we are the beacon of democracy, we have our esteemed institutions, and other self-serving fairy tales reasserting American superiority and invincibility to Americans — as if we were exempt from the universal laws governing humanity since time immemorial. This narcissistic delusion of our exceptionalism is our downfall.

That describes the third leg of tyranny. The one so deep in denial that it thinks it’s not even there. The one that afflicts the media itself directly, and that plays such a big role in rendering it incapable of dealing with Trump’s lies.

As for the other two legs, Mika said:

Another term applicable here is "narcissistic collusion," which describes the bond between a leader with Trump's character defect and his sycophants and followers. They mirror their imagined greatness to each other, and this mutually reinforced delusion of grandeur becomes an unshakable bond, superseding any other considerations, like respect for truth and decency, or even a concern for one's reputation; Comey's recent New York Times piece touches upon it, but does not go into the narcissism and its spectacular bonding properties.

Both Trump’s close followers and his mass base get swept up in such delusions. The latter are driven by a need for revenge, Mika argued in “Who Goes Trump?”:

... for the tyrant is always chosen to perform this psychically restorative function: to avenge the humiliations (narcissistic wounds) of his followers and punish those who inflicted them.

But the followers are profoundly confused about the actual sources of their wounds. Their misperception “is based on the displacement and projection characteristic of the scapegoating process that becomes an inextricable part of the narcissistic collusion between the tyrant and his followers."

In turn the displacement, projection and scapegoating are reflected in some of Trump’s lies listed above: those around immigration, most obviously, but also those that overstate the impact of trade deficits, those that exaggerate military spending, and — to the extent the followers fuse their identities with Trump’s — his lies about he himself being persecuted. The revenge-driven power of narcissistic collusion makes such lies especially impervious to rational refutation. Conventional ways to try to understand such lies will inevitably fall short.

“The sycophants and followers of a leader who fulfills their narcissistic fantasies will do anything to support him, up to and including self-destruction,” Mika said. “No lie is too big or outlandish when this deeply irrational, even psychotic process is engaged. So we can expect 10,000 more lies from Trump, served more brazenly now that he feels emboldened by putting Mueller's investigation behind him.”

Of course, it may not be that easy. But Democrats’ refusal to let Mueller’s investigation vanish will only enrage Trump further, leading to even more lies.

There are no simple solutions in Mika’s book. Defeating a tyrant really does depend on draining the swamp he lives in — the larger set of social ills she described in “Who Goes Trump?”:

Tyrants do not arise in a vacuum just as tyranny does not spring on the world unannounced. It takes years of cultivation of special conditions in a society for a tyranny to take over. Those conditions invariably include a growing and unbearably oppressive economic and social inequality ignored by the elites who benefit from it, at least for a time; fear, moral confusion, and chaos that come from that deepening inequality and a breakdown of social norms, and growing disregard for the humanity of a large portion of the population, as well as for higher values.

The positive vision that Democratic presidential candidates are striving to articulate needs to deal effectively with this reality. If it doesn’t, even defeating Trump in 2020 won’t be enough. If the conditions that raised him to power continue, there will be another much like him to come — perhaps a more intelligent, more effective one. Trump’s lies will continue — whether from his lips, or from those of others — as long as we fail to confront the truth about ourselves as a society.