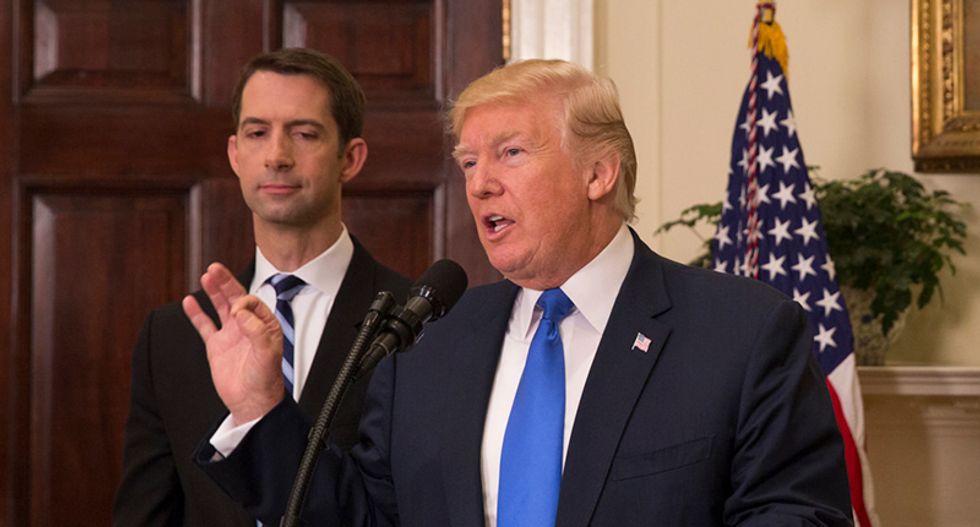 Republican Sen. Tom Cotton appeared on CBS This Morning as part of a promotional book tour and was asked about Donald Trump’s latest round of trade war tariffs. Trump has promised $15 billion in new bailout funds for struggling U.S. farmers to counter the fallout from his tariffs, in addition to the $12 billion he’s already doled out.

So how did Cotton react to the struggling farmers back home in Arkansas? With a shrug. Even worse, he used U.S. troops as a shield, noting that they make bigger sacrifices than other people. Listen to Cotton shrug off U.S. farmers losing their shirts.

"There will be some sacrifice on the part of Americans, I grant you that. But also that sacrifice is pretty minimal… https://t.co/M6d2xt1zGz
— CBS This Morning (@CBS This Morning)1557753991.0

NORAH O’DONNELL: Senator, I want to ask you about the trade negotiations that are going on right now. There was just recently a University of Arkansas study, from your home state, that said retaliatory tariffs by China could end up hurting many farmers in your state. Is President Trump hurting the Americans that he promised to help?

TOM COTTON: So, these tariffs are gonna end up hurting both the Chinese and some Americans, I’ll grant you that. I think they’ll ultimately hurt the Chinese more than they will Americans, in part because Chinese companies and their government have been cheating the United States for so long. There will be some sacrifice on the part of Americans, I grant you that. But, I also would say that sacrifice is pretty minimal compared to the sacrifices that our soldiers make overseas, that our fallen heroes who are laid to rest in Arlington make, and are right about sacred duty.

TOM COTTON: When I’m home in Arkansas, I hear from farmers who are worried about opening up new markets and getting their products to market. But, they also understand that China is a serious competitor to the United States and wants to displace us around the world. And they look at the sacrifices that soldiers, sailors, airmen and Marines make around the world and they are willing to bear some of the sacrifices in the short term, to hopefully in the long term ensure our long term prosperity and security.

JOHN DICKERSON: Why not tell them that on the front end? Why not tell them this sacrifice and the higher prices your going to have to pay are a part of this conflict as opposed to saying what’s not true, which is that China’s going to pay these tariffs to the treasury?

TOM COTTON: Well, China will ultimately be paying a price for these because Americans may be shifting their consumption or their investment decisions away from Chinese products that have oftentimes been dumped in the United States. You know we have Arkansans who are benefiting from these tariffs as well. You know, in eastern Arkansas we have one of the largest steel production areas now in the country. They obviously are doing very well. Again, I’m not going to say that no one is going to make a sacrifice, but in the long term that effort is to make sure the United States remains pre-eminent as a global superpower both in the economic and the security.

Summarizing Tom Cotton, “some of you may die, but that’s a sacrifice I’m willing to make.”

For the record, economic experts far and wide have been advising against these tariffs from the start and are loudly warning of the dire economic impact.