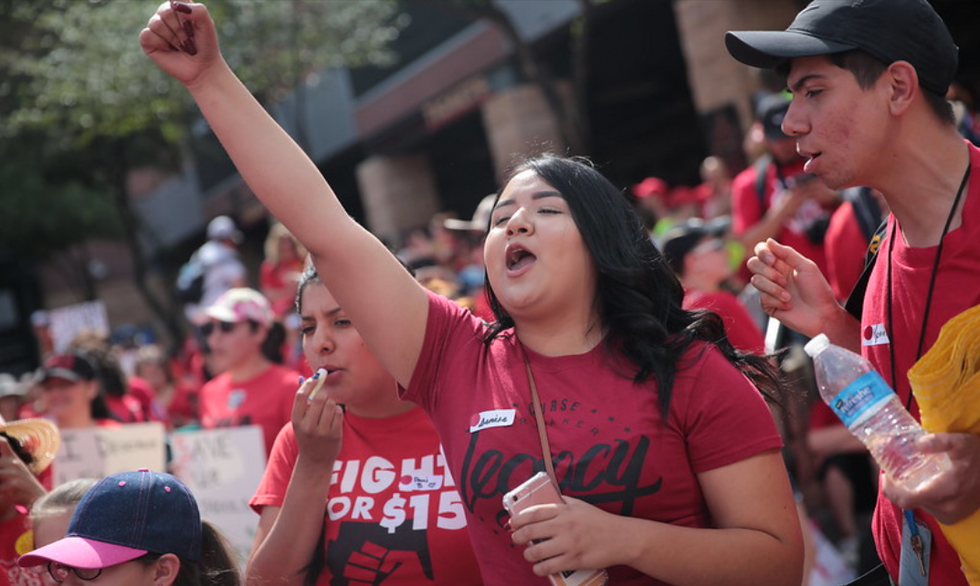 The enduring RedForEd movement that has spurred teachers to walk out of schools, organize massive labor actions, and stage protests in streets and state capitols has resulted in big victories for teachers in terms of new labor-friendly contracts, increased teacher pay, and improved conditions in schools. But there’s a danger these victories could be undone. That’s the warning coming from teachers in Sacramento who are threatening to walk off the job over alleged violations of their collective bargaining agreement with the district.

Much like other teacher actions that have occurred across the nation, Sacramento teachers are demanding changes to their salaries, reduced class sizes, and increases in school support staff including more nurses, psychologists, librarians, and program specialists. But unlike other teacher walkouts, what’s happening in Sacramento is a replay of what they thought they had already won.

“We thought we had an agreement when we threatened to strike last year,” David Fisher tells me in a phone conversation. Fisher is the president of the Sacramento City Teachers Association (SCTA), which threatened a walkout in November 2017 of the previous school year.

“We were motivated by what was happening in RedForEd movements elsewhere,” he recalls. “We had everything lined up [in preparation for the strike] including having parents organized and having meals ready for the kids” who were going to miss school lunches.

The strike was averted when the union and district administration came to an agreement and signed a new contract in December 2017. Specifically, the three-year contract included an across-the-board pay increase for teachers. Salaries for the district’s teachers are below state averages and rank fourth from the bottom when compared to 14 other comparable districts in the state, according the Sacramento Bee.

Also, teachers won an adjustment to salary schedules that would result in an additional 3.5 percent increase to teachers in the middle stages of their careers. Fisher maintains the pay lag for those teachers had resulted in significant attrition as teachers left the district and went to work in adjacent districts to increase their salaries.

Another significant win for the teachers was to get the district’s reassurance it would hire additional teachers to lower class sizes, especially in the later elementary and middle school grades, and add more school support personnel. In order to fund those new positions, the district pledged to “work with the teachers union,” according to local news reports, to find savings in the employee health care program.

Now the district is refusing to implement the salary rescheduling, Fisher says, and the administration claims the savings from the health care benefits aren’t there, so there’s no money for the class size reduction and additional support staff.

As the district has dug in its heels, teachers went to court to force the district into arbitration—something else the contract required—to implement the salary schedule restructuring. And teachers are demanding the district confirm what kinds of savings it has and hasn’t been able to wring from the health care plan in order to pay for class size reductions and increased support staff, according to Fisher.

In its defense, the district points to an estimated budget deficit of nearly $30 million, which could push the district into insolvency sometime this year and risk a takeover by the state.

Teachers point to data showing that when the district signed the contract with the union, the school system was in its best financial condition ever, with a balance of $56 million in its unreserved fund, double-digit revenue increases, and spending falling short of projections. At the end of the 2017–2018 school year, district income came in over 5 percent above budget.

What happened to the money?

While some local analysts point to the 2017 labor contract as the cause of financial woes, it’s not hard to find other drains on the district’s budget that can be solely attributed to questionable administrative decisions.

First, the district, a regional unified system made up of multiple smaller districts, poured huge amounts of money into salaries and bonuses for all the various superintendents, increasing administrator pay at a clip much faster than the rate of teacher pay boosts. The number of administrators also grew, the union contends, from 251 to 269.8, adding an additional 3.5 million to salaried positions. Fisher told me the average total compensation for district administrators is over $150,000. According to the union’s calculations, the district would save $16.6 million by reducing administrative staff levels to those in 2014–2015 when student enrollment was actually higher.

Also, the district instituted a “use it or lose it” vacation policy that instantly led to a $6 million payout in stored vacation time to administrative employees. The district maintained there would be financial benefits long term, but teachers argue the district didn’t have to release the money all at once.

Teachers also want the state to investigate a recent contract the district signed with the University of California - Merced that drained another at least $1.75 million from the budget. District Superintendent Jorge Aguilar, who helped lead the contract agreement, also happens to retain a paid position at UC - Merced at the same time he serves as superintendent, which seems like a huge conflict of interest. The contract is for establishing a new system to collect and share data on students transitioning from high school to college to “reduce barriers” to college and reduce placement in college remediation classes. Worthy goals for sure, but it’s so far not specified what this new “system” entails and what could be long-term costs to the district.

If you can do the math, spending corrections teachers want to see corrected in the budget may or may not close the deficit gap. But their arguments certainly refute the administration’s claim that outlays resulting from the new contract are solely to blame for budget shortfalls. And the district’s stonewalling on negotiations further undermines its legitimacy in the negotiation.

Fisher says their action is a measured response to the district’s failure to live up to its part of the bargain. Schools will close for one day only and teachers will be mindful of how their actions could be perceived should the district proceed toward insolvency and state takeover.

Nevertheless, he contends the stakes are high if Sacramento teachers don’t walk out. Based on recent conversations he has had with teachers in Los Angeles and Oakland, who both won big concessions from districts after their strikes, he believes that should the district succeed in steamrolling teachers and reneging on its obligations to a signed contract, it will give districts elsewhere a green light to do the same. He is probably right