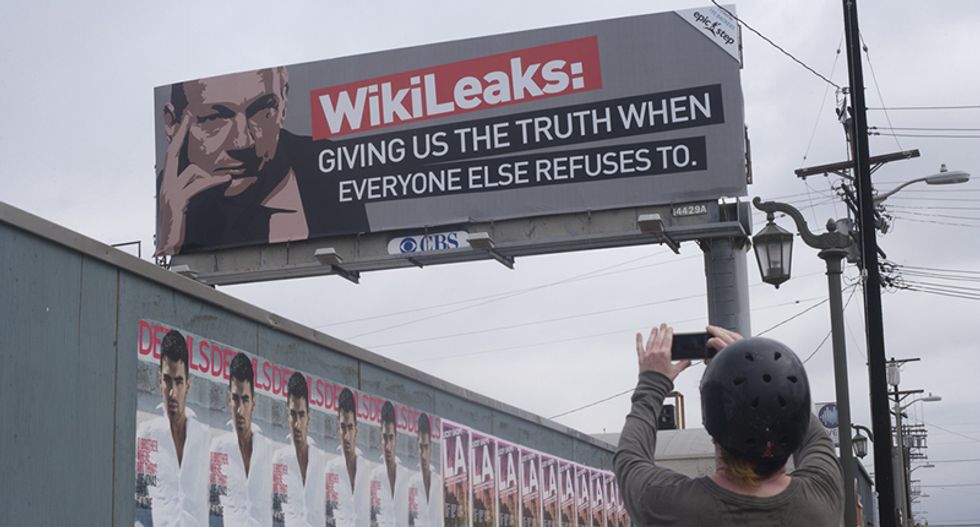 Edward Snowden joined the chorus of advocacy groups, reporters, and critics as the NSA whistleblower described the arrest of WikiLeaks founder and publisher Julian Assange Thursday morning as a "dark moment for press freedom" that could have grave implications for journalism across the globe.

"Images of Ecuador's ambassador inviting the U.K.'s secret police into the embassy to drag a publisher of—like it or not—award-winning journalism out of the building are going to end up in the history books," Snowden tweeted.

Assange's arrest comes amid concerns that British authorities could be planning to extradite him to the United States.

The U.K. police confirmed that Assange was arrested in part due to "an extradition warrant on behalf of the United States authorities."

Shortly after Assange's arrest, the U.S. Justice Department unsealed charges against the WikiLeaks founder, accusing him of a "computer hacking conspiracy."

US did not waste any time putting in extradition request for Assange. Terrible precedent if journalist/publisher e… https://t.co/mhehAIcIPM
— Ewen MacAskill (@Ewen MacAskill) 1554983320.0

"If you're cheering Assange's arrest based on a U.S. extradition request, your allies in your celebration are the most extremist elements of the Trump administration, whose primary and explicit goal is to criminalize reporting on classified docs and punish [WikiLeaks] for exposing war crimes," tweeted The Intercept's Glenn Greenwald.

If you're cheering Assange's arrest based on a US extradition request, your allies in your celebration are the most… https://t.co/5MCEBjh57P
— Glenn Greenwald (@Glenn Greenwald) 1554981379.0

This is Assange's lawyer, confirming he was arrested not just for bail-jumping in the UK (a minor offense) but also… https://t.co/jRhC56bBZs
— Glenn Greenwald (@Glenn Greenwald) 1554982786.0

"All of us in the press should read the charges made against Assange very carefully," wrote Rolling Stone's Matt Taibbi, "as this case has enormous potential ramifications for journalists everywhere."

Greenwald's colleague at The Intercept, investigative reporter Jeremy Scahill, called the arrest "an extremely dangerous crossing of the rubicon" when it comes to press freedoms. "All journalists," he said, "should stand in fierce opposition."

The continued imprisonment of @xychelsea is an utter disgrace. The arrest of Julian Assange represents an extremely… https://t.co/ZeKxYU3JFJ
— jeremy scahill (@jeremy scahill) 1554986559.0

As Common Dreams reported last November, the Trump Justice Department accidentally revealed in an unrelated court filing that it has secretly charged Assange.

"Wikileaks material from Iraq, Afghanistan, and elsewhere has become a unique, invaluable resource for investigative journalists and scholars around the world," the U.K.-based Centre for Investigative Journalism (CIJ) said in a statement Thursday.

"Whatever your view of its philosophy of radical transparency, Wikileaks is a publisher," CIJ added. "Any charges now brought in connection with that material, or any attempt to extradite Mr. Assange to the United States for prosecution under the deeply flawed cudgel of the Espionage Act 1917, is an attack on all of us. Mr. Assange deserves the solidarity of the community of investigative journalists. The world is now watching."

Ben Wizner, director of the American Civil Liberties Union’s Speech, Privacy, and Technology Project, warned in a statement that "prosecution by the United States of Mr. Assange for WikiLeaks' publishing operations would be unprecedented and unconstitutional, and would open the door to criminal investigations of other news organizations."

Journalists were quick to point out that major establishment newspapers like the New York Times and the Washington Post frequently publish classified information. Prosecuting Assange for doing the same, critics argued, would set an extraordinarily dangerous precedent.

This is the question, and the answer is clear: Publishers have a right to publish information in the public interes… https://t.co/QRZEK0fTmI
— Ryan Grim (@Ryan Grim) 1554980886.0

In an editorial just two days ago, the U.K.-based Guardian newspaper made clear that while Assange may have some charges to answer for there is simply no defensible reason for the British government to extradite him to the U.S. to face a sealed indictment over his work as a journalist and publisher:

From first to last, the Assange case is a morally tangled web. He believes in publishing things that should not always be published—this has long been a difficult divide between the Guardian and him. But he has also shone a light on things that should never have been hidden. When he first entered the Ecuadorian embassy he was trying to avoid extradition to Sweden over allegations of rape and molestation. That was wrong. But those cases have now been closed. He still faces the English courts for skipping bail. If he leaves the embassy, and is arrested, he should answer for that, perhaps in ways that might result in deportation to his own country, Australia. Nothing about this is easy, least of all Mr. Assange himself. But when the call comes from Washington, it requires a firm and principled no. It would neither be safe nor right for the U.K. to extradite Mr. Assange to Mr Trump's America.

Assange is reportedly set to appear in court as early as Thursday afternoon, according to WikiLeaks.

As he was being carried to a police van by British authorities Thursday morning, Assange shouted, "Resist this attempt by the Trump administration."