'I am a young, vibrant man': Trump goes full-tilt pants on fire in insane and rambling press event 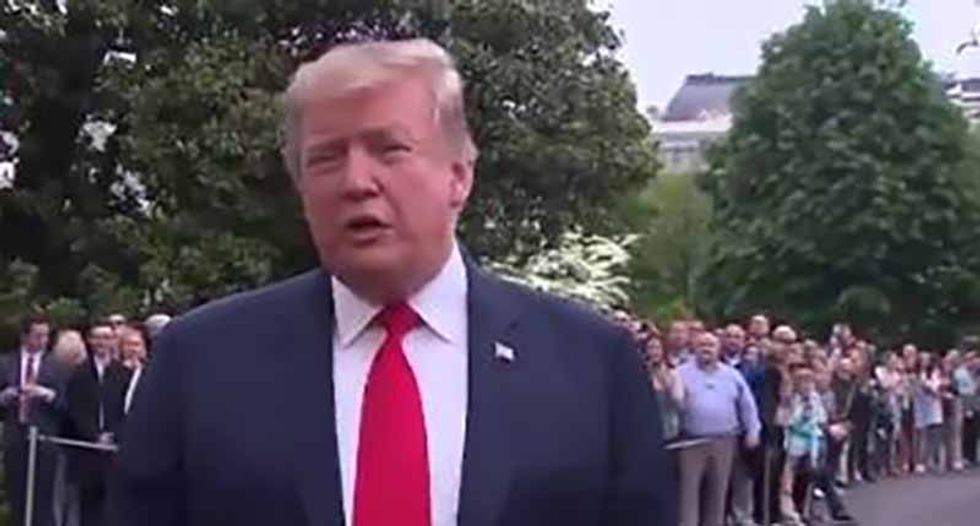 President Donald Trump delivered a cornucopia of lies as he talked with reporters on the White House South Lawn Friday morning. Among the many topics the president opined on were the economy, former Vice President Joe Biden's entrance into the 2020 race, the deadly Unite the Right neo-Nazi rally, a treasonous Civil War-era general, age, his attempted firing of Special Counsel Robert mUeller, and the measles outbreak and vaccines.

On Joe Biden, who is just four years older than Trump: "I am a young vibrant man."

He falsely claimed his "both sides" remarks were describing only people who were in Charlottesville to support or oppose the monument to treasonous Civil War general Robert E. Lee, who waged war against the United States.

On the Mueller report that details the lengths to which he went in trying to fire Special Counsel Robert Mueller:

Trump claimed hen did not pay $2 million to North Korea for the release of hostage Otto Warmbier, who died soon after being returned. Warmbier was tortured and returned in a vegetative state. Trump did not speak to reports the U.S. signed a letter of intent to pay North Korea.

President Trump on measles outbreak: "They have to get the shot. Their vaccinations are so important. This is reall… https://t.co/rE98txXOWq
— MSNBC (@MSNBC)1556287112.0

A sampling of the literally dozens of times Trump has promoted anti-vax pseudoscience on Twitter https://t.co/v0wWMJV8sX
— Catherine Rampell (@Catherine Rampell)1556286543.0