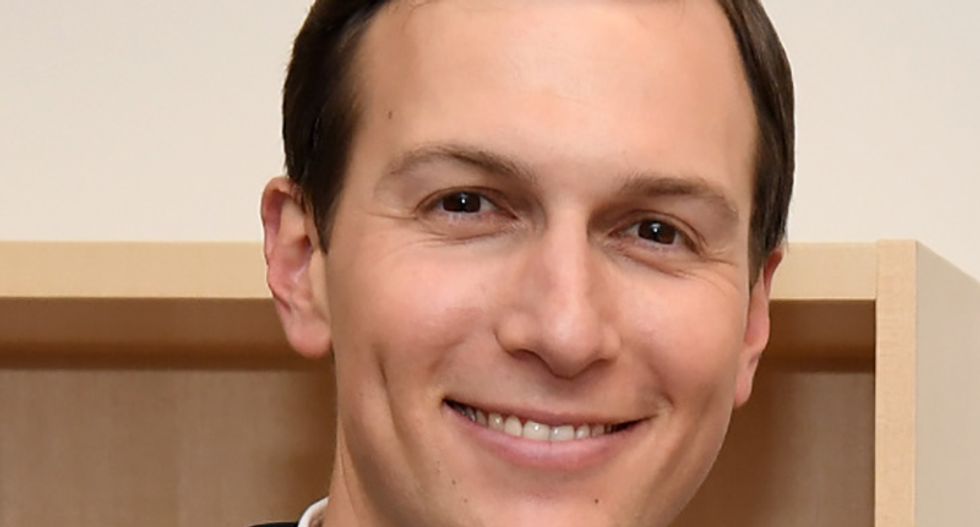 Donald Trump is a threat to the national security of the United States. That is not a hyperbolic sentence. He’s displayed that with his threat to close the Southern border—which will create massive economic disruption, to surrounding himself with a cast of grifters and criminals—many of whom were given actual jobs in his administration (see Michael Flynn), to stunning the world, standing onstage with Vladimir Putin denouncing U.S. Intelligence findings.

The list of security breaches is a long one, but none more serious than the foreign intelligence operations running in and around Trump’s private golf clubs and the decision to grant top secret security clearances to 25 individuals who did not pass the necessary background checks for access to the world’s most guarded intelligence secrets.

Now the Washington Post has confirmed one of those individuals who failed a background check was Jared Kushner, Donald Trump’s son-in-law. He was rejected due to “significant” security concerns and Donald Trump instructed his then chief of staff, John Kelly, to grant Kushner clearance anyway. John Kelly was so disturbed by the order that he took the unusual step of writing a memo to archive his objections. And that is a big deal. Former senior Justice Department officials concur, this a very big deal.

“It’s a big deal,” said David Kris, a senior Justice Department official during the administrations of presidents George W. Bush and Barack Obama and a founder of the consulting firm Culper Partners.

“The kinds of concerns that she mentioned are very serious,” he said. “Senior staff at the White House — and particularly relatives of the U.S. president — are incredibly attractive targets for our adversaries seeking to gather intelligence or exert covert influence.”

Just last month, Kushner’s company was seeking a $1.5 billion loan from Fannie Mae and Freddie Mac. In 2018, a private equity billionaire was seemingly able to leverage loans for access. From the New York Times:

Joshua Harris, a founder of Apollo Global Management, was advising Trump administration officials on infrastructure policy. During that period, he met on multiple occasions with Jared Kushner, President Trump’s son-in-law and senior adviser, said three people familiar with the meetings. Among other things, the two men discussed a possible White House job for Mr. Harris.

The job never materialized, but in November, Apollo lent $184 million to Mr. Kushner’s family real estate firm, Kushner Companies. The loan was to refinance the mortgage on a Chicago skyscraper.

Sources familiar with the plans told Bloomberg a senior executive at Cadre, which was co-founded by Kushner, recently met with representatives of SoftBank Vision Fund, a Japanese conglomerate which receives much of its funding from the Saudi and UAE governments.

The technology investment fund claims investors such as Apple, Foxconn, Oracle cofounder Larry Ellison, and Qualcomm. Nearly half of its $100 billion is financed by the Saudi government's Public Investment Fund, Bloomberg said. At least $15 billion has been invested by the UAE sovereign wealth fund.

Jared Kushner, who was not elected to any role, not Senate-confirmed for any role, and could not pass a security background check necessary for access to top secret information, is taking in hundreds of millions of dollars in loans. In the process, he’s using WhatsApp to secretly communicate with the Saudi Crown Prince and others, all while negotiating to give the Saudis secret nuclear technology, over the objections of career security analysts. This is something Democrats are trying to halt in its tracks. From The Guardian:

Brad Sherman, a California Democrat, told Pompeo: “If you cannot trust a regime with a bone saw, you should not them with nuclear weapons.”

Sherman said the issuance of the seven permits, known as Part 810 authorisations, represented an effort by Trump and his son-in-law Jared Kushner to bypass Congress, and spare the Saudi monarchy the need to accept a formal agreement that would put strict limits on its nuclear programme.

“It tells the country that if Jared and Donald Trump can transfer nuclear technology to the Saudis on seven occasions and not reveal the details to members of Congress with the highest national security clearance, even in special classified rooms – what are they hiding?” Sherman said in a telephone interview.

It’s one red flag after another. Just what did security advisor Tricia Newbold see in Kushner’s background check that caused her to deny his security clearance? The bar to gain top secret access is a high bar for a reason, as it should be. This is national security we are talking about and being Donald Trump’s son-in-law shouldn’t be a good enough reason to gain access to the world’s most guarded secrets. Why would our allies give us sensitive information knowing it could be used by greedy or nefarious characters to enrich themselves? At the end of the day, it’s one more serious matter that must be investigated and one more clear indicator Donald Trump is not competent in his duties as commander-in-chief.