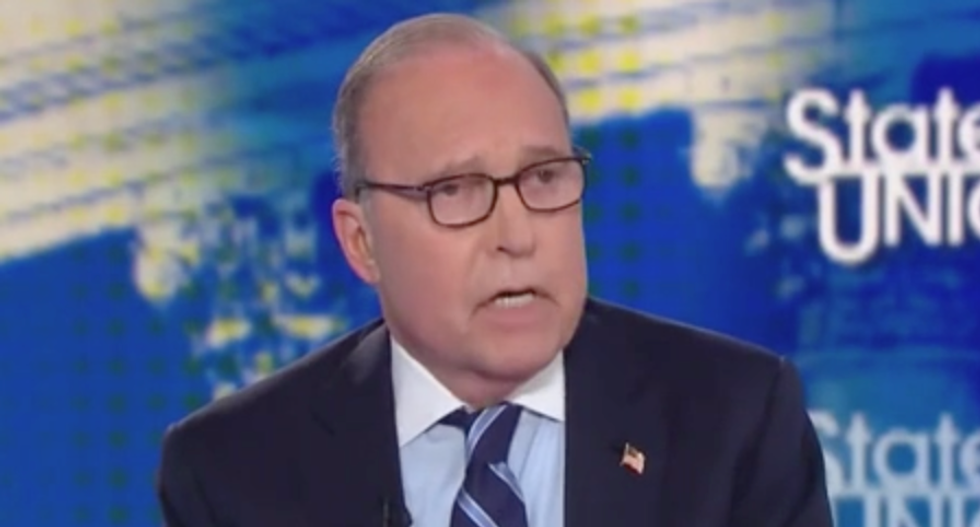 On Sunday, CNN’s Jake Tapper clashed with White House economic adviser Larry Kudlow, a strategist known for his partisan cheerleading on the economy. The two of them fought over Herman Cain, the former pizza executive and Tea Party presidential candidate President Donald Trump is tapping for a top position on the Federal Reserve.

“You know you’ll face questions about this,” said Tapper. “Herman Cain dropped out of the 2012 race because of numerous sexual harassment allegations, multiple women. He denies them all. I want you to take a listen to one of the accusers.” He then played a clip of Sharon Bialek, a woman who claimed Cain “reached for my genitals … grabbed my head and pulled it towards his crotch” during a job interview.

“There are at least four women who have allegations like this,” said Tapper. “Again, Cain denies they’re true, but doesn’t this trouble you?”

“We are going through a vetting process in the White House,” said Kudlow. “I’m sure the Senate Banking Committee will do likewise. There’s big disputes here. Mr. Cain disagrees with this point of view. I’m not going to litigate that here.”

“It’s four women, it’s not just one,” Tapper pressed him.

“Lord knows, in this town, you know, I come here to work in the white House every 35 years. It’s very toxic here. More than I’ve ever seen.”

“Larry, nobody has made allegations like this about you or me,” Tapper said.

“We’ve seen — whether it’s Supreme Court justices or many other things, we’ve seen a lot of charges here. They don’t necessarily pan out,” said Kudlow, frantically trying to pivot away from the discussion. “Again, let me make this generic point on behalf of the president and Mr. Cain and Mr. Moore, a 3.8 percent unemployment rate, which is fabulous, an economy that’s growing at better than 3 percent, could do better even with tax cuts and deregulation.”